What to know about Brazil’s election as Bolsonaro faces Lula, with major world impacts 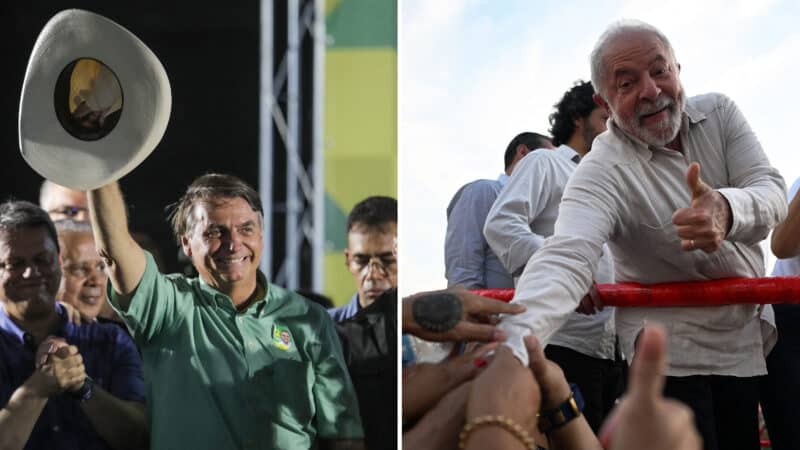 SÃO PAULO — Brazilians head to the polls Sunday to vote in a crucial presidential election that is testing the world’s fourth-largest democracy and could have a critical impact on the fight against climate change.

On the far right is current President Jair Bolsonaro, a brash Christian nationalist widely criticized for escalating destruction of the Amazon, mishandling Brazil’s COVID-19 response and casting doubts on the country’s electoral system.

He faces a tough fight from a former president and one of Latin America’s most storied leftists, Luiz Inácio Lula da Silva, universally known as Lula. His lead in the polls has narrowed since winning the most votes in the first round four weeks back. Da Silva has to overcome voter skepticism after major corruption scandals tarnished his leftist Workers’ Party and sent da Silva to jail for more than a year.

What are the polls saying?

Currently, all major polls have da Silva in the lead, but Bolsonaro has been gaining on him. In the election’s first round on Oct. 2, former President da Silva captured 48% of the vote compared to incumbent Bolsonaro’s 43% — a difference of nearly 6 million voters. The big story then was Bolsonaro’s better-than-expected showing; most surveys had him trailing by double digits. Polling firms scrambled to understand why their numbers were so far off when it came to predicting Bolsonaro’s support. Some lawmakers even called for pollsters to be charged with a crime if their forecasts don’t match the election results.

On Monday, the IPEC polling firm had da Silva taking 50% of the vote and Bolsonaro 43%, with a margin of error of 2 percentage points.

What’s at stake for Brazil

The two men have very different plans for the country. A Bolsonaro win would keep Brazil along the same conservative, pro-business path. The 67-year-old president insists he is the defender of family values, winning him support from a growing population of conservative evangelicals. He rejected lockdowns and mask mandates during the pandemic. And through executive orders, he not only loosened Brazil’s gun laws but severely eliminated environmental protections in the Amazon. Researchers say protecting the world’s largest rainforest is critical to safeguard Indigenous communities and diverse wildlife, while helping prevent the rise of carbon dioxide that causes climate change. Bolsonaro has promised more mining and agrobusiness expansion, as well as privatization of public energy companies, if reelected.

As president from 2003 through 2010, da Silva was able to finance, due to a commodity boom, programs for the poor that helped tens of millions of Brazilians climb out of poverty and earned him a large and loyal political base. Da Silva, a 77-year-old former union leader, has promised to once again help Brazil’s most vulnerable citizens, without giving many specifics, as well as crack down on illegal deforestation and create a new Indigenous peoples’ ministry. But many Brazilians still tie him to the wide corruption scandals that rocked his Workers’ Party. The country’s Supreme Court annulled Da Silva’s prison conviction in 2021.

Brazil’s electorate is highly polarized now after four years of Bolsonaro’s presidency and hard-right rhetoric, says political scientist Guilherme Casarões. A recent survey says voters’ top concerns include the economy, public health and corruption. Either candidate will have to wrestle with a weak economic outlook and a divided nation.

The campaign has been one of Brazil’s dirtiest

Brazilians have been bombarded with negative ads and social media disinformation in the lead-up to the election. Supporters of Bolsonaro have been telling voters that if elected da Silva will close churches and turn Brazil into a communist nation à la Venezuela and Cuba. Bolsonaro has been fending off accusations of “pedophilia” and cannibalism, based on past statements from the current leader. Electoral authorities have tried to cut down on the noise, passing some of the most restrictive limits on campaign speech in decades. The country’s top electoral court justices have imposed severe fines and time limits for removal of false online content. While many liberals applaud the officials’ attempts to clamp down, conservatives have accused authorities of censorship.

Bolsonaro has frequently cast doubt about the reliability of Brazil’s electronic voting system. He recently stepped up criticism on the electoral court and its justices, accusing the head justice of bias. There’s concern that Bolsonaro will contest the results, especially if the final tallies are as close as predicted.