What are the suicide drones bombarding Ukraine, and where did Russia get them? 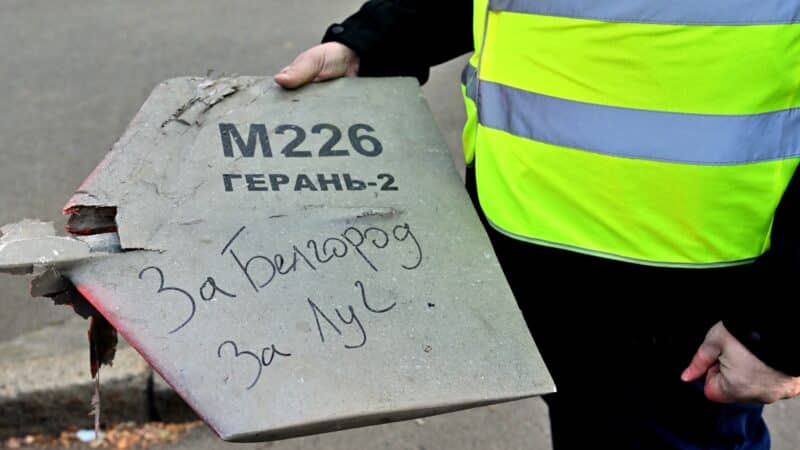 The attacks were carried out by what are called Shahed drones — also known as suicide or kamikaze drones.

The drone attacks do not change the war itself, but their use and how Russia came to have them is a topic of international interest.

What are these ‘suicide drones’?

Unlike predator drones that can be remote-controlled and drop ammunition loads and fly off, the Shahed drones are programmed with coordinates ahead of time and rely on GPS to hit their targets.

Farzin Nadimi is an associate fellow with The Washington Institute who specializes in the security and defense affairs of Iran. Nadimi said these drones are “fairly accurate,” decently resistant to signal jamming, and difficult to detect and track using radar, but they are not without weaknesses.

“I think the most vulnerable aspect of these drones is it’s a very loud noise that they make,” Nadimi said.

Another disadvantage of the Shahed drones is their speed, said Ret. Marine Col. Mark Cancian, who now serves as a senior adviser at the Center for Strategic and International Studies.

“The problem with them is that they’re slow,” Cancian said. “They’re propeller-driven and you know, like all propeller-driven drones, they’re just not very fast so they’re susceptible to being shot down by either missiles or by aircraft guns.”

Where did Russia get them?

U.S. officials have confirmed to NPR that the drones used in these attacks are Iranian, but Iran has continued to deny its involvement and working relationship with Russia.

“One of the reasons that Russia obtained or purchased weapons from Iran was that they have been using their own stocks of cruise and ballistic missiles pretty quickly, and they have not been able to replenish those stocks,” Nadimi said. “So [they have] resorted to much cheaper Iranian options.”

Iran’s government has blatantly denied supplying Russia with the drones used in Ukraine.

“Iran has time and again declared that it is siding with no side in the Russia-Ukraine war. Iran has not given arms to either warring side,” Iran’s Foreign Ministry said on Twitter.

Despite the denial from Iran, Ukraine’s government estimates that Russia has ordered 2,400 of these drones.

Can Ukraine withstand these attacks?

Both Nadimi and Cancian compared the Russian decision to target cities as it is losing on the frontlines to The Blitz – the German bombing campaign that targeted London in World War II.

“It seems like the Russians are using these the way they use their cruise missiles – that is to strike at the major cities likely with the intention of intimidating the Ukrainian population … but I think from a military point of view that is a mistake,” Cancian said. “The Ukrainians are very unlikely to break. The morale is very unlikely to break.”

By focusing on the cities, Cancian added, Ukraine’s military would likely have more time to recover on the front lines, similar to Britain’s recovery in WWII.

Nadimi said just as Britain overcame the threats to its capital, he believes Ukraine will be able to do the same.

At the same time, the U.S. has said it is speeding up its delivery of NASAMS, the same ground-based air defense systems that are used to protect the White House in Washington, D.C., and the systems are expected to be in Ukraine in a few weeks.