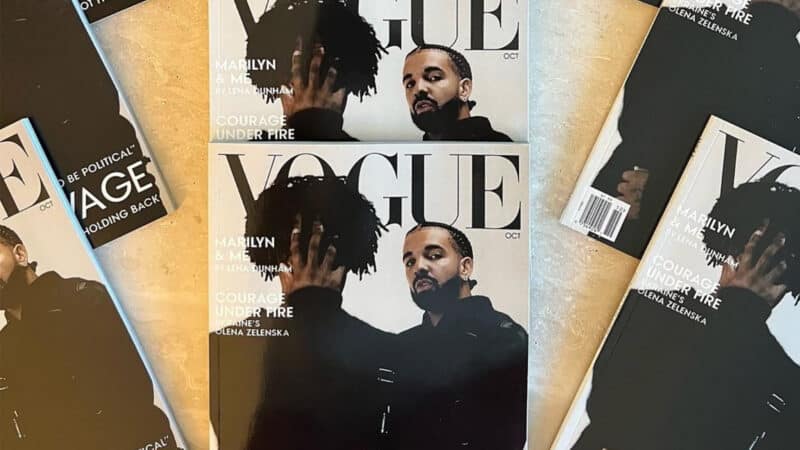 Condé Nast, the publisher of Vogue magazine, has filed a lawsuit against rappers Drake and 21 Savage for using a fake Vogue cover used to promote their new album, Her Loss.

In a 30-page lawsuit filed on Monday, Condé Nast argues that the “widespread promotional campaign” launched by the rappers for their latest album is “built entirely” on the use of Vogue’s trademarks — giving the false premise that the two artists would be featured in the December issue of the magazine.

Condé Nast is seeking at least $4 million in damages, or triple the rappers’ profits from their album and its “counterfeit” magazine — whichever is higher.

It’s unclear if the artists directly profited from the fake magazines, other than through publicity, as the magazines were not for sale.

The publisher is also seeking a preliminary injunction and temporary restraining order to stop the rappers from continuing to publicize the fake magazine cover, as well as damages over trademark infringement.

“All of this is false. And none of it has been authorized by Condé Nast,” said Condé Nast in the lawsuit.

The lawsuit also alleges that the two rappers created counterfeit issues of Vogue and distributed copies of it in “North America’s largest metropolitan areas” in addition to posters of the spoof cover. The counterfeit issue was also posted to social media for more than 135 million users who actively follow both Drake and 21 Savage, according to the suit.

In addition, the lawsuit alleges that the artists falsely thanked Anna Wintour — the editor-in-chief of Vogue — on social media for the “love and support on this historical moment.”

The publisher said it was in communication with both Drake and 21 Savage leading up to the release of Her Loss, but according to the lawsuit, the rappers’ “disregard for Condé Nast’s rights” left it no choice but to take legal action.

The distribution of the counterfeit Vogue cover is among several parodies the two rappers produced in support of their latest album. The two also pretended to perform on NBC’s Saturday Night Live and to have been interviewed on Howard Stern’s SiriusXM radio show.

The duo also pretended to perform on NPR Music’s Tiny Desk series, where the rappers are seated in front of a backdrop of books and All Songs Considered signage.

In response to the spoof performance, an NPR spokesperson said: “If Drake and 21 Savage want to perform at the real Tiny Desk, we’d love to have them.”