USA Curling is in open revolt over its CEO 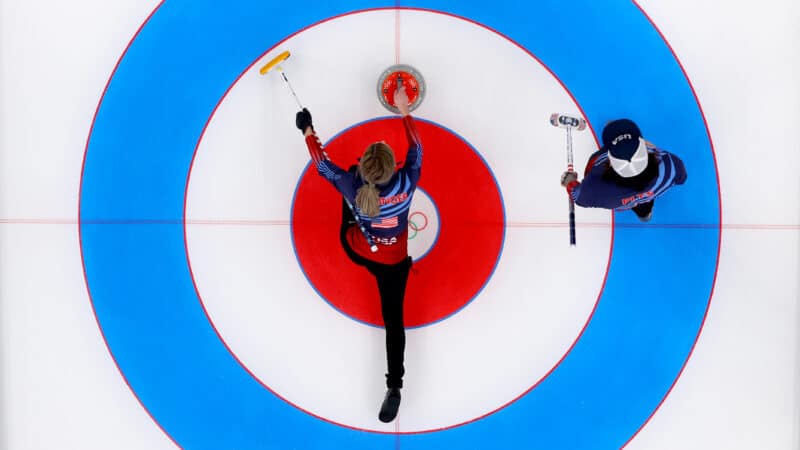 U.S. curling is in a crisis, with multiple controversies raging in public view. One centers on whether USA Curling should fire its CEO over his handling of sexual abuse allegations when he formerly led a different organization, the NWSL — the women’s pro soccer league.

That conflict is playing out amid an inner schism: USA Curling’s board plans to cut ties with a large regional association comprising more than 6,000 curlers.

Tensions ramped up this week, when several current and former members of USA Curling’s Diversity, Equity and Inclusion Task Force issued an open letter calling for the governing body to fire Chief Executive Officer Jeff Plush, or for board members to resign en masse. An online petition based on the letter drew more than 1,000 signatures, as curling clubs around the country voiced their support on social media.

The letter reflects simmering distrust in the national governing body that boiled over on Oct. 3, when it emerged that Plush refused to take part in former acting U.S. Attorney General Sally Yates’s investigation that found systemic sexual misconduct and abusive behavior by authority figures in the NWSL — the women’s pro soccer league formerly led by Plush.

USA Curling and its board of directors say that athletes’ safety and well-being is their main priority. They also say they’re sticking with Plush, saying they’re confident he can still be effective as CEO, including his responsibility to protect players.

The disputes are poised to be front and center Friday night, when athletes and curling clubs attend the national body’s annual meeting. Anyone following the sessions online via YouTube will likely see a different side of a sport that has become a darling of fans during recent Winter Olympics, where competition is marked by intense focus and flamboyant team uniforms.

Curling is gripped by an unexpected twist

The revelation that Plush did not aid the Yates inquiry came a year after some in curling pushed for Plush to be placed on administrative leave while Yates’ and any other investigations took place. USA Curling’s board refused to take that step.

Responding to the Yates report, USA Curling’s board said that it is reassured in Plush’s ability to lead the organization, citing the results of its own investigation, along with “Jeff’s candor during interviews with the Board, and his actions during his time as USA Curling CEO.”

The board has not released findings or other details from its inquiry — a step the diversity panel and others are asking it to take.

“We believe that the Yates report indicates his inability to act appropriately with issues of this nature, and we don’t want to see that repeated at USA Curling,” Walker said of Plush.

Plush’s critics want him taken out of the reporting chain for abuse complaints; they’re also calling for a review of how USA Curling has handled such reports during his tenure.

What the Yates report says about Plush

Plush, who was the NWSL’s commissioner from 2015 to 2017, is a prominent figure in the Yates report. His name appears 39 times, but he declined to speak with investigators led by Yates and the law firm King & Spalding: “Jeff Plush did not respond to our request for an interview,” the report states.

Instead, Plush’s words appear through emails and other documents from his time at NWSL. The records show that former Portland Thorns player Mana Shim emailed Plush directly in 2015, “reporting [Thorns coach Paul] Riley’s persistent and unwanted advances and his retaliation against her when she asked him to stop,” the report states.

Plush shared Shim’s email with others, but after Riley was fired by the Thorns, Plush did not block him from returning to the NWSL to coach another team, the North Carolina Courage — which fired Riley in September 2021, when players publicly made allegations against him in The Athletic.

“They chose to ignore us and silence us, allowing the abuse to continue,” Shim and two fellow athletes said after Yates’ report was released. “It is time for action, accountability, and change.”

In the wake of revelations about the NWSL’s handling of the Riley case, Lisa Baird, who succeeded Plush as the league’s commissioner, resigned.

Plush stepped down from leading the NWSL in 2017 — but not before drawing the ire of some of the biggest stars in U.S. soccer, who had recently won the women’s World Cup. The athletes’ complaints centered on subpar facilities.

Megan Rapinoe called Plush out by name in July 2016 when the Seattle Reign and Western New York Flash were relegated to playing on an undersized field in a baseball stadium. Rapinoe was quickly echoed by fellow star Alex Morgan; months later, Morgan signed to play for France’s Olympique Lyonnais, prioritizing that team over Plush’s NWSL.

When USA Curling hired Plush in 2020, it touted his experience dealing with sponsors and TV networks — revenue streams crucial to a sport’s growth. But the deal Plush made at NWSL was with A+E Networks, and it resulted in putting women’s soccer teams on the Lifetime channel rather than on sports networks. The partnership died ahead of schedule, just two years later.

Curling has grown by leaps and bounds in recent years, thanks to its popularity at the Winter Olympics and unprecedented success by U.S. athletes. In normal times, this year’s membership meeting would focus on ways to keep people involved with the sport in the three years between the Games.

Instead, sessions could be overshadowed by the fight over Plush’s leadership. And USA Curling has scheduled a vote to ratify its decision to oust the Grand National Curling Club, or GNCC, one of its most influential regional associations, after years of conflicts over dues and other policies.

Last year, the GNCC was a vocal proponent for placing Plush on leave; it recently issued a call for his removal, condemning the board’s decision to support the embattled CEO.

The GNCC’s roots date to 1867; it became a regional body in 1958. Today, its clubs range from Maine to Florida, and its curlers account for about 25% of USA Curling’s membership, GNCC Vice Chairperson Kristen Conrad told NPR.

USA Curling’s board voted in July to revoke the GNCC’s standing, saying the GNCC had refused to fulfill a requirement that regional associations make sure at least 95% of their clubs are paying dues to the national body.

Conrad says the GNCC and USA Curling clashed over how dues should be handled even before the pandemic hit — arguments that included what she calls “personal conflicts and power struggles.” It grew worse, she said, when some of GNCC’s clubs looked to resign from the national body while retaining ties with the regional body, so they could still rent equipment and get other help. The association voted to maintain its relationship with the clubs, despite the potential for punishment at the national level.

“Many clubs feel that they get very little for the $34 per person that they pay” to USA Curling, Conrad said. Some clubs resigned, she added, because of their own financial problems, disagreements or lack of confidence in the national group, “or a combination of those reasons.”

The GNCC is scheduled to have a hearing with USA Curling’s judiciary committee on Friday, hours ahead of a vote that would remove the group. If the GNCC is ousted, its member clubs would be left to join USA Curling on their own if they want to be part of the national body.

This week, the rancor played out as a four-person team affiliated with the Grand National Curling Club represented the U.S. at the World Mixed Curling Championship in Aberdeen, Scotland.

Those close to the sport worry that the off-ice distractions could hinder curling’s expansion, after expanding its reach in recent years.

“It’s definitely a weird time to have this going on,” said diversity committee member Natalie Rose, citing the twin controversies. “There is concern for sure that there would be a chilling effect to that growth if people don’t feel like there is a solid place to get involved with curling.”