U.S. fines airlines $7.5 million and they must refund customers for canceled flights 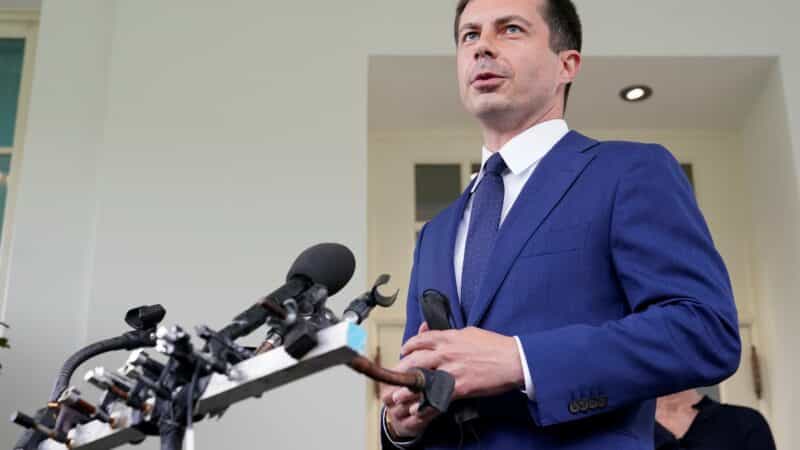 The Department of Transportation is cracking down on airlines that refuse to give customers refunds for canceled flights.

Secretary of Transportation Pete Buttigieg Monday announced that the department is assessing fines totaling $7.5 million against six airlines, and the DOT is ordering those airlines to pay $600 million in refunds to hundreds of thousands of customers who had been denied them.

“When a flight gets canceled, passengers seeking refunds should be paid back promptly,” Buttigieg said. “Whenever that doesn’t happen, we will act to hold airlines accountable on behalf of American travelers and get passengers their money back.”

“A flight cancellation is frustrating enough and you shouldn’t also have to haggle or wait months to get your refund,” he said.

Airlines are required to pay customers refunds when a flight is canceled for any reason, but often, in an effort to keep the cash, many airlines offer vouchers or credit for future travel instead of a refund.

Airlines’ refusal to give passengers their money back has become a huge source of consumer complaints, especially during the early days of the pandemic when almost no one was flying.

Bill McGee, an aviation consumer advocate with the American Economic Liberties Project, cites data from the Bureau of Transportation Statistics showing that complaints filed against airlines for refusing to provide refunds soared in 2020 to more than 89,000, up 57 times from just about 1,500 in 2019.

One big problem was that would-be travelers often canceled their plans because of the pandemic and the significant travel restrictions in place, but the airline wouldn’t cancel the flight until the last minute. In those instances, airlines usually were not required to offer refunds, but many did offer vouchers or credit for future travel instead. But those vouchers and credits often expired before some people were able to or felt comfortable traveling again.

And delays, cancellations and significant changes to flight schedules has become a significant problem this year, as airlines initially scheduled more flights than they had the staff to operate.

Buttigieg says airline operations have improved in recent months after a horrendous summer of flight disruptions.

“But still, flights do get canceled. And when that happens, DOT will be here to make sure that a refund is available and that it’s processed as promptly as possible, that we’re going to have people’s backs when they experience a disruption,” Buttigieg told reporters in a news conference over Zoom Monday.

But consumer advocate Bill McGee isn’t so sure. While he says these enforcement actions are a small step in the right direction, “It’s really too little and too late. The fact is, the biggest offenders here don’t seem to be addressed.”

He notes that one only relatively small U.S. carrier, Frontier, is being punished, along with five foreign carriers (six if you include Air Canada, which was fined by the DOT last year). And he agrees that Frontier “is one of the worst offenders.”

“Why is it that none of these other airlines have been fined?”

But he says consumers filed thousands of complaints against United, Delta, American and other airlines over their refusal to provide refunds.

“Why is it that none of these other airlines have been fined?” Mc Gee asks. “And why is it taking so long … why is it taking (almost) three years to investigate this, particularly since all the data is public?”

“Airlines that brazenly skirt the rules deserve to be fined, but this latest round of enforcement from the USDOT comes almost three years too late and leaves out the most egregious U.S. offenders,” McGee says.

The airlines facing fines include just one U.S.-based carrier, Frontier, which has been forced to pay $222 million in refunds, and a $2.2 million fine. But in a statement, Frontier says it will pay just $1 million out of pocket, after having received a $1.2 million goodwill refund credit.

The other airlines subject to Monday’s enforcement action are:

All of the consent orders are available at www.regulations.gov, docket number DOT-OST-2022-
0001.

According to the DOT, consumers can file air travel consumer complaints online http://airconsumer.dot.gov/escomplaint/ConsumerForm.cfm or by voicemail at (202)-366-2220.