Oath Keepers’ Stewart Rhodes denies he organized the Jan. 6 attack on the Capitol 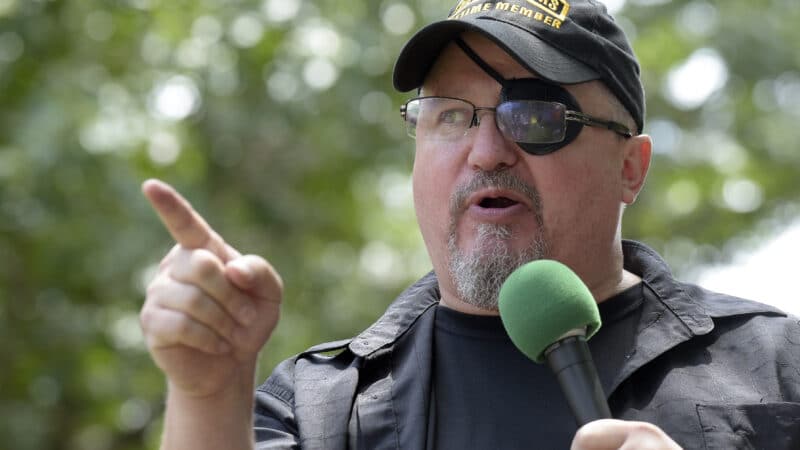 Stewart Rhodes has testified in his own defense in his federal trial that he was not part of planning the Jan. 6 assault on the Capitol and that members of the far-right Oath Keepers group who busted into the building made a “stupid” decision.

Rhodes and four other defendants are charged with seditious conspiracy in the most serious criminal case yet to stem from the siege on the seat of government. Prosecutors have presented hundreds of text messages and witnesses who tied the defendants to sometimes violent rhetoric about keeping former President Donald Trump in power.

Under questioning by his lawyer, Rhodes denied he had a plan to “disrupt the Capitol,” saying, “It was nowhere in the mission scope at all.”

Breaching the building “opened the door for our political enemies to persecute us,” Rhodes said, and he said that’s exactly what happened, pointing to the trial now in its sixth week.

Rhodes said no when his attorney asked, “You didn’t control, ask for or have anything to do with” forces on standby in Virginia to bring weapons into Washington, D.C. Rhodes said he had delegated most of the oversight of the Oath Keepers operation that day and warned members of the group to be careful about what they brought into D.C., given the city’s strict gun laws.

Rhodes also denied having any communications with fellow defendants Jessica Watkins and Thomas Caldwell on Jan. 6. He said others in the group were in charge of communications. He denied being a micromanager of the Oath Keepers, as he was portrayed by government witnesses.

Rhodes testified that he was in a hotel room when he got a call telling him that the Capitol had been breached, and that he asked, “Who?” He said the caller, another Oath Keeper, replied, “Trump supporters.” Rhodes said he later went to the Capitol grounds.

He said he called Oath Keepers to meet at a central point but it was to keep them out of trouble, not to assault the Capitol. He said he didn’t get some cellphone messages related to the events of Jan. 6 until the next day.

After the attack, Rhodes said, a woman he describes as his lawyer but that prosecutors call his girlfriend instructed Oath Keepers to keep quiet about their activities. Rhodes said the woman, Kellye SoRelle, acted on her own when she told Oath Keepers to delete text messages and other materials that might incriminate them.

Rhodes said he brushed off her warning that law enforcement would soon appear at his doorstep, describing himself as a “dissident” authorities know where to find if they want him.

The government rested Thursday in the biggest case so far in the Justice Department’s investigation into the deadly Jan. 6, 2021, attack on the U.S. Capitol. Rhodes and the other defendants are accused of plotting to use force to prevent Joe Biden from taking office as president.

The jury heard a month of testimony from more than two dozen witnesses, including FBI special agents, U.S. Capitol Police officers, former Oath Keepers, and two members of the group who stormed the Capitol and later pleaded guilty to conspiracy.

Rhodes and his alleged co-conspirators — Jessica Watkins, Kelly Meggs, Kenneth Harrelson and Thomas Caldwell — are charged with seditious conspiracy, obstruction and other offenses in connection with Jan. 6.