Special protections for about 300,000 immigrants are extended amid federal lawsuit 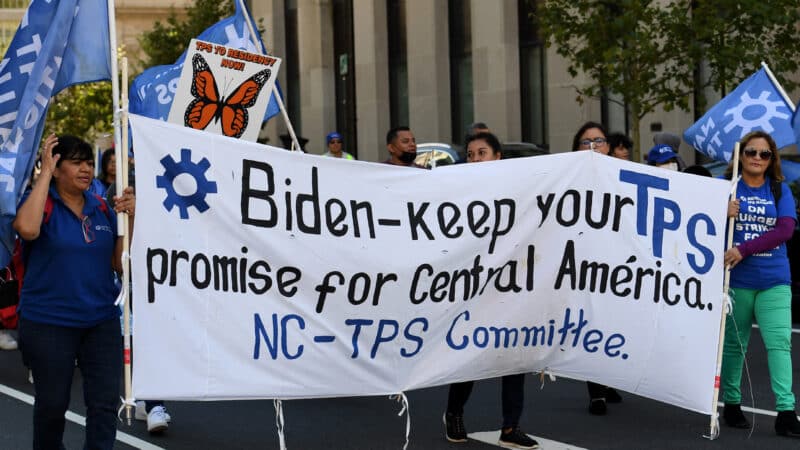 For the past four years, Elsy Flores de Ayala has lived in limbo — unsure whether the life she built in the U.S. would stay intact or if she would be deported back to El Salvador.

Flores de Ayala, who lives in Washington D.C., has been allowed to legally live and work in the U.S. for over two decades under the Temporary Protected Status program which deemed her native country unsafe to return.

This winter, her stay was at risk of expiring after the Trump administration sought to revoke the program for immigrants from six countries — El Salvador, Haiti, Nicaragua, Sudan, Honduras and Nepal — by arguing that conditions in those nations have improved enough for people to return.

On Thursday, the Department of Homeland Security announced that the program would continue for Flores de Ayala and over 335,000 others through June 2024 amid an ongoing federal lawsuit aiming to reverse President Trump’s ruling.

“This is a little bit of protection for us,” Flores de Ayala told NPR. “At least now we are going to have a good holiday and we have more time.”

The complaint filed by the ACLU, the National Day Laborer Organizing Network and others is currently in the U.S. Ninth Circuit Court of appeals with a request to be reheard. The Biden administration has formally re-designated protections for Haiti and Sudan but the four other countries included in the lawsuit — El Salvador, Nicaragua, Honduras and Nepal — have only received an extension because of the lawsuit.

What is temporary protected status?

In 1990, the program was created to support immigrants who are unable to return to their home countries safely due to a humanitarian crisis such as armed conflict or a natural disaster.

It applies to people already living in the U.S., preventing them from being deported and issuing them work permits.

Sixteen countries are currently designated for TPS and such protections are typically reviewed for renewal by the Department of Homeland Security every 18 months. As of 2021, over 400,000 immigrants have protected status. The largest populations living in California, Florida, Texas and New York.

Many recipients have lived in the U.S. for decades because of how often those protections have been extended, but the program itself is not a direct pathway to becoming a U.S. citizen.

“Many of them have lived here longer than they’ve lived in the country that they were born in but that doesn’t necessarily mean that there is a path to seek citizenship,” said Emi MacLean, a senior staff attorney at the ACLU of Northern California. “That’s a failure of our immigration laws.”

Flores de Ayala was visiting family in the U.S. when El Salvador was devastated by a massive earthquake in 2001. Since becoming a TPS holder, Flores de Ayala said she built a life that she’s proud of.

“We have worked here for decades, built our communities here and dedicated our time to our children’s schools,” she said. “This is more our home than anywhere else.”