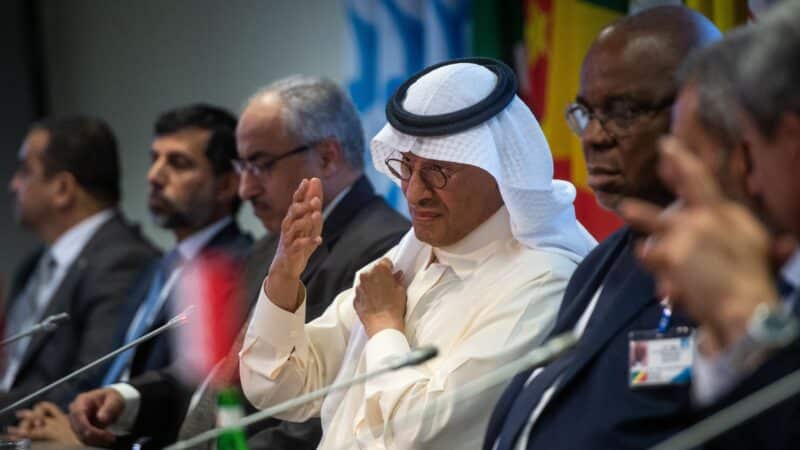 The Biden administration is weighing retaliatory action against longtime ally Saudi Arabia after the kingdom sided with Russia in cutting oil production.

President Biden told CNN on Tuesday there would be “consequences” for Saudi Arabia after the OPEC+ group of oil-producing countries last week announced a 2 million barrel per day reduction in oil output.

Biden declined to elaborate on what action he is considering.

A dramatic cut to the amount of oil on the market could drive up fuel prices in a rocky year at the pump.

The decision by Saudi-led OPEC+ has created a serious breach in U.S.-Saudi relations, which have seen their share of ups and downs over the past seven decades.

“This move is clearly going to severely strain an already bad relationship between the U.S. and Saudi Arabia and spark a pretty significant backlash across both sides of the aisle in Washington, D.C.,” says Jason Bordoff, director of Columbia University’s Center on Global Energy Policy.

Saudi Arabia’s Foreign Ministry issued a statement Wednesday night rejecting claims that the oil supply cut was “politically motivated against the United States” or that the Saudis were “taking sides” in an international conflict — apparently referring to Russia’s invasion of Ukraine.

It said the oil decision was “based purely on economic considerations,” and that the U.S.-Saudi relationship “serves the common interests of both countries.”

It wasn’t just the sheer size of the cut in oil production by OPEC+. It was also the timing — coming less than three months after Biden visited Saudi Arabia to lobby against such a reduction, and just ahead of the U.S. midterm elections where prices at the gas pump could have an effect on voters.

“It feels punitive against the Biden administration,” says Jonathan Panikoff, an expert on Middle East security at the Atlantic Council and a former U.S. intelligence analyst on the region.

“I think it’s hard to think it’s otherwise because the Saudis aren’t naive about the U.S. political situation,” Panikoff says. “It may not have been the core reason for doing it, but they absolutely were happy to do it.”

This week, OPEC — which stands for the Organization of the Petroleum Exporting Countries — lowered its forecasts for crude oil demand in the coming months because of global inflation, soaring interest rates and geopolitical tensions.

Maksad says U.S. officials were engaged in a “full-court press” with their counterparts in the Gulf region leading up to the Oct. 5 OPEC+ meeting. He says there was an understanding of what the U.S. administration was pressuring members of the oil cartel to do.

“It’s just that the will to acquiesce to U.S. domestic policy — the administration’s domestic political considerations — was not there,” he says.

Russia profits from a seat at the table

It was one thing to have America’s partner Saudi Arabia lead the drive to cut production. Pouring salt into the administration’s wounds was having Russian Deputy Prime Minister Alexander Novak, who is sanctioned by the U.S., sitting at the table when the cuts were announced. Saudi Arabia and Russia co-chair OPEC+.

The U.S. and many of its allies have been trying to slash Russia’s oil and gas exports, which help prop up the country’s economy. Oil production cuts will drive up the price per barrel and funnel more revenue into the Kremlin’s coffers to help pay for the war in Ukraine. Saudi Arabia’s decision to band together with Russia in production cuts is seen as undermining U.S. efforts to curb Russia’s oil earnings.

“Many in D.C. view the Saudis now as aligning themselves with Russia at a time when Russian troops are killing Ukrainians and reduced Russian energy exports are plunging much of the world into an energy crisis,” says Bordoff.

Democrats in Congress are calling for Biden to take tough measures against Saudi Arabia. That includes legislation introduced by Rep. Ro Khanna of California and Sen. Richard Blumenthal of Connecticut to stop selling arms to the kingdom. And Senate Foreign Relations Committee Chairman said the U.S. should “freeze all aspects of our cooperation with Saudi Arabia.”

But the Atlantic Council’s Panikoff says freezing weapons sales to Saudi Arabia may not be the wisest move as it could allow China to fill that void. He says instead, the U.S. needs to be “smarter” about how it approaches the Saudis.

It goes back to the crown prince

“I don’t think we’ve fully accepted the notion that he is a different leader than we’ve ever dealt with. And so we’re going to have to have a different relationship,” he says.

The crown prince is a transactional leader, Panikoff explains, and the U.S. will have to decide if it wants to spend time and energy rebuilding its strategic relationship with the kingdom or become more transactional, as well. Panikoff says that could affect Saudi Arabia’s security guarantees.

“Maybe we don’t sell the more advanced aircraft,” he says. “Maybe we remove some Patriot batteries and say, ‘Look, we recognize your security, we’re not trying to diminish it. … We have to balance our security goals as well.'”

Panikoff believes the crown prince’s decision to tie himself so closely to Putin with the OPEC+ decision is a misstep.

But Maksad, with the Middle East Institute, says the Gulf region is no longer beholden to the U.S. and has the right to look for other options.

“And so they are building bridges to China, which, by the way, accounts for over a quarter of oil exports from Saudi Arabia,” he says, “and also with Russia, that had been sort of expanding its role in the Middle East.”