Russia is retreating, so why is the U.S. nudging Ukraine to compromise? 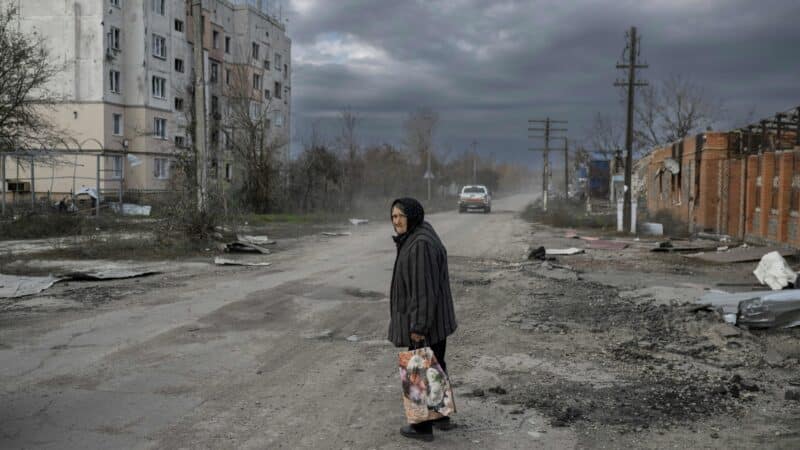 Russia says its withdrawing troops from the key southern Ukrainian city of Kherson, which would mark another big setback for Russian leader Vladimir Putin.

This is the latest military success for Ukraine since it launched a major offensive more than two months ago, giving it the clear momentum on the battlefield.

Yet President Biden and his top advisers are now nudging Ukraine to show a greater willingness to consider peace talks with Russia.

“There has to be a mutual recognition that military victory is probably, in the true sense of the word, may be not achievable through military means, and therefore you need to turn to other means,” Army Gen. Mark Milley, the chairman of the Joint Chiefs of Staff, said Wednesday.

“When there’s an opportunity to negotiate, when peace can be achieved, seize it,” Milley told The Economic Club of New York.

The general is the most recent of several administration officials to make remarks along these lines in recent days. U.S. officials say they are not forcing Ukraine into talks, or dictating any sort of potential outcome.

At a news conference on Wednesday, President Biden reiterated his position that the United States is “not going to tell [Ukraine] what they have to do.”

The president also said that Russia’s withdrawal from Kherson is evidence of “some real problems with the Russian military.”

He went on to say that the two sides may recalibrate their positions over the winter. And, Biden added, “it remains to be seen whether or not there’ll be a judgment made as to whether or not Ukraine is prepared to compromise with Russia.”

U.S. officials also acknowledge that neither Ukraine nor Russia appear ready to hold serious negotiations. But the Americans would like Ukraine to ease its adamant opposition to talks with Russia, believing negotiations will be required at some point.

Russia and Ukraine held a few brief rounds of talks shortly after Russia in February. But the discussions went nowhere, quickly broke down, and there’s been no sign they’re about to restart.

In his nightly televised address, President Volodymyr Zelenskyy this week repeated the conditions before negotiations could take place. He said all Russian forces must leave Ukraine, Russia must pay damages caused by war, it must punish war criminals, and there must be guarantees that Russia will never invade again.

“We have proposed negotiations numerous times, to which we always received crazy Russian responses, terrorist attacks, shellings or blackmail,” the Ukrainian president said.

When Russia annexed four Ukrainian regions in September, Zelenskyy said he would never negotiate with Putin.

“We will negotiate with the next Russian president,” he said.

Zelenskyy made no mention of Putin in his most recent remarks, and some observers interpreted this as a slight change in Ukraine’s position, even if it wasn’t stated explicitly.

However, she did not say what compromises Russia might be willing to make.

Ukrainians said this follows a familiar pattern, with Russia offering to negotiate or take a pause when it is doing poorly and looking for a chance to regroup militarily.

The significance of Kherson

Kherson was one of Russia’s few successes in the war. Russian forces faced virtually no resistance as they captured the city on the Dnipro River. This was seen as part of a broader Russian effort to take control of Ukraine’s entire Black Sea coast, which is used to export the country’s agricultural products, the foundation of its economy.

Now the Russians say they are leaving Kherson without a fight, though Ukrainian forces have been advancing toward the city for the past two months.

The Russian media reported Thursday that the withdrawal was going as planned. This follows the formal announcement by Russian military leaders leaders Wednesday on state television, where they said described it as a difficult decision, but a necessary one to protect the Russian forces.

Analysts say no such move could be made without Putin’s approval, though the Russian leader has yet to comment publicly.

This would mark the third major retreat by the Russian forces this year.

A large Russian force approached the capital Kyiv, the country’s largest city, in the first days of the war in February, but pulled back a month later at the end of March.

The Russians also neared the second largest city, Kharkiv, in the north, before pulling back in May.

Despite Russia’s latest announcement, the Ukrainians are treating it with skepticism, saying they have not seen evidence of a full-scale withdrawal.

Ukraine said Thursday that its troops have taken over a dozen villages outside Kherson in the past day. Russian troops and roadblocks are gone. But the Ukrainians say they are still not sure what Russia is doing inside the city.

Russia had an estimated 20,000 to 30,000 troops in the Kherson region, a number that could not slip away unnoticed, especially since Ukraine has damaged or destroyed the bridges over the Dnipro River, which would be used to leave.

The mystery surrounding the city’s status is likely to clear itself up fairly soon. Some Ukrainian civilians are still in the city. Ukrainian troops have kept Kherson under close watch as they have advanced toward it this fall. And the U.S. military and intelligence agencies are also watching from afar.

Meanwhile, Zelenskyy has urged Ukrainians to be patient.

“Our emotions must be restrained,” the president said in his television address Wednesday evening. “The enemy does not bring us gifts, it does not make gestures of goodwill.”

Russia says it’s withdrawing troops from the key southern Ukrainian city of Kherson, which would be yet another big military setback. Yet Ukraine says it isn’t seeing a full-scale Russian pullout and is questioning whether this may be some sort of trap. The Biden administration is asking Ukraine to show a willingness to negotiate with Russia. To break this all down, we’re joined by NPR’s Tom Bowman in Washington and Greg Myre in Kyiv. Welcome, both.

TOM BOWMAN, BYLINE: Good to be with you.

NADWORNY: So, Greg, what is the latest in the city of Kherson?

MYRE: Well, the Russian Defense Ministry says the withdrawal is going as planned. And this follows an announcement by Russian military leaders Wednesday that they were pulling out. Now, none of this could happen without President Vladimir Putin’s approval. He’s giving up one of Russia’s few successes in the war without a fight. And it just highlights Russia’s military weakness at this point. Now, here in Kyiv, Ukrainians are still skeptical that Russia is really undertaking a complete withdrawal. Ukrainian troops are moving into villages outside Kherson, where the Russians have left. But the situation inside the city itself is still not clear. President Volodymyr Zelenskyy is urging caution. In a TV address, he says, quote, “our emotions must be restrained. The enemy does not bring us gifts. It does not make gestures of good will.”

NADWORNY: OK, Tom, so square this for me because it sounds like the Russians are faltering on the battlefield. And yet the Biden administration is raising the possibility of peace negotiations.

BOWMAN: That’s right. What’s interesting is the Biden administration recently had discussions with Ukrainian leaders asking them to ease up on its harsh rhetoric and make sure that Ukraine is at least open to talks. Now, officials say the U.S. is not forcing Ukraine into talks or even dictating any sort of parameters for talks, only that they wanted just peace. And this was privately. But here’s the thing. Just over the past 24 hours, we’ve seen a public nudge toward diplomacy. Joint Chiefs Chairman Mark Milley told a group in New York that neither the Russians nor the Ukrainians can achieve a military victory. And each country – get this – has more than 100,000 soldiers killed and wounded. And he compared it to 1914, the first year of World War I, where hundreds of thousands were killed. And there was this chance for diplomacy that was not taken, and the war dragged on to another four years with millions more dead. Here’s General Milley.

MARK MILLEY: When there’s an opportunity to negotiate, when peace can be achieved, seize it.

BOWMAN: Also, President Biden just yesterday said that both sides might recalibrate their positions in light of the Russian retreat from Kherson – so a subtle push for diplomacy. But it appears neither side is really ready.

NADWORNY: Yeah. So let’s talk about that. Greg, it feels like there’s kind of these two parallel narratives, then. So on the ground, it’s like we’re seeing headway on the Ukrainian side – then this message from Biden. What’s the Ukraine response?

MYRE: There’s certainly not any enthusiasm for negotiations that we’re sensing here in Kyiv. President Zelenskyy is repeating the conditions for negotiations. You can hear him here. He’s speaking in Ukrainian, but you can hear just how adamant he is.

MYRE: He’s saying all Russian forces must leave Ukraine. Russia must pay damages caused by war. It must punish war criminals. And there must be guarantees that no Russian invasion will occur again. The Russian Foreign Ministry has come out and said, we’re ready for negotiations. But they haven’t provided any details, and there’s no indication that Russia would meet any of these positions set by Ukraine.

NADWORNY: So Ukraine has long said that Russians have to be out of Ukraine in order to start this negotiation. Is that realistic, Tom?

BOWMAN: You know, it’s really not. Now, Ukraine has done quite well in pushing back the Russian forces. It surprised everyone, of course, with the help of U.S. and NATO military assistance taking more and more territory. But U.S. officials, again, question whether Ukraine can achieve what President Zelenskyy wants, taking back all the territory held by Russia, including Crimea, as we heard from the Joint Chiefs of Staff. Now, in the south, as Greg mentioned, Russian forces have started to leave Kherson, the only regional capital grabbed by Russia earlier this year. That’s significant, at least politically and maybe militarily, because that could keep the Russians on the far side of the river, preventing Russian forces from heading back across into Kherson and possibly – get this – allow some Ukrainian troops to be diverted to that fight in the east to push that fight as well.

NADWORNY: Greg, as you said, Ukraine might not be interested in negotiating, but we’ve got some folks that have a little bit of power here – the U.S. and Europe. If they start to scale back their support, what happens?

MYRE: Well, that could happen. There’s talk about it. We’re not seeing anything definite yet, but that would potentially be a big blow. The U.S. has given Ukraine about $19 billion this year in military aid alone. There’s also lots of humanitarian aid, which is badly needed in the winter. Much of the country is now facing daily power cuts, including right here in the capital. And this could get worse in the coming months. Now, all that said, Ukraine has fought Russia since 2014, and Western military aid didn’t arrive in large quantities until this year. So Ukraine did figure out ways to keep Russia at bay even when it was fighting largely with its own resources.

BOWMAN: And if I could quickly add, the U.S. and its NATO partners will hold another meeting for more military aid next week. And what they really need is air defenses to prevent the power supply from getting hit by Russian missiles. So we’ll see what happens with that additional aid.

NADWORNY: That is NPR’s Tom Bowman in Washington and Greg Myre in Kyiv. Thank you both.