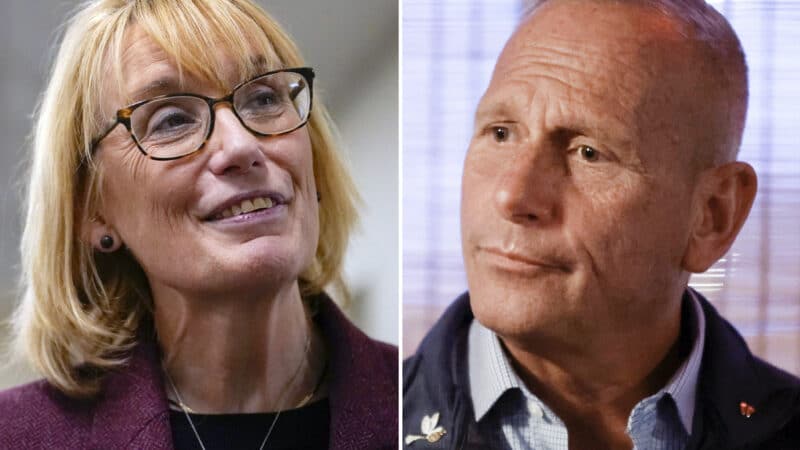 New Hampshire is a must-win state for Democrats in their campaign to keep control of the Senate. Sen. Maggie Hassan narrowly won her last race in 2016 by 1,017 votes. Recent polls show her ahead in the contest against GOP nominee, Don Bolduc, a retired Army brigadier general. Yet, Hassan and her allies expect a tight race in the final two weeks.

Hassan, who also served as governor before becoming a senator in 2017, expects the contest to go down to the wire in this purple state, where the current governor is a Republican but its congressional delegation is comprised of Democrats.

Many voters across the political spectrum say rising costs — on home heating, groceries, gas, and housing — are a top issue. But access to abortion is animating the Democratic base and a sizable chunk of independents, over 40% of the state’s electorate, who warn that flipping a blue seat red in the midterms could lead to a Republican-controlled Senate that decides to take up legislation to institute a federal abortion ban.

Voters will be able to hear from the candidates this week in a debate hosted by local news outlets, including New Hampshire Public Radio.

Republicans are linking Hassan to Biden

Bolduc is campaigning as an outsider, arguing if he’s sent to Washington, he’s not going to be a career politician. At a rally with supporters recently in Rochester, he honed in on a message that framed the race as a fight against President Joe Biden as much as it is against Hassan. He spoke about what he’s heard from small businesses still recovering from the pandemic, saying, “they are making their way back and then, boom, down comes the hammer from the Biden-Hassan agenda, which skyrockets inflation.”

Bolduc won the GOP primary in September echoing former President Donald Trump’s false claims that the 2020 election was rigged. The day after that primary win, he reversed himself and said Biden won. But since then, he has made conflicting public comments.

Trying to pivot away from statements he made in a podcast associated with QAnon conspiracies, as reported by the New York Times, Bolduc told reporters in Rochester, N.H., “I do not believe the election was stolen.”

He added about the reversal, “the simple thing is I changed my mind and I have the freedom to do that.”

Bolduc’s recent disavowals of his previous hardline stances, like proposing major cuts to Social Security and Medicare, aren’t keeping more mainstream GOP figures from backing him. Former Secretary of State Mike Pompeo, a possible 2024 presidential candidate, endorsed Bolduc last week. Nikki Haley, former U.N. ambassador and another potential candidate for the GOP nomination in 2024, joined Bolduc for a rally in Rochester, her second time on the campaign trail for him.

Haley also tied Hassan to Biden on issues like the cost of home heating and the withdrawal of U.S. forces from Afghanistan, which Haley blasted as a failure.

“When you look at our foreign policy and the fact that America is weak, you can thank Maggie Hassan,” Haley said.

On voters minds: abortion and inflation

Another issue that Bolduc has shifted on is abortion. He’s said he would” always default for a system that protects lives from beginning to end.” But on the campaign trail, he emphasizes that the issue should be left to the states to decide. Asked if that means he’d vote no on a federal abortion ban, Bolduc grew frustrated at the topic, telling NPR, “Yes, I’ve said that. I don’t know how many times I need to say it. I can put together a skit for you.”

Bolduc spoke briefly with NPR after a campaign event, but declined multiple requests for a longer interview.

Meanwhile, Hassan is quick to point out Bolduc’s earlier statements on abortion, saying this is one area that earns him the label of “extreme.” She said her supporters believe the issue of abortion is no less important than inflation. “You know, as I started to talk with women about inflation, they all changed the subject to abortion.” She added, “for some people it is, you know, a concern about whether they’re gonna be able to pay rent and put food on the table. But they also said to me, but if my fundamental rights are gone, that’s much harder to get back.”

Women are on both sides of the abortion issue and its ultimate impact on the November election. Barbara Dunnington, a Bolduc supporter, said the economy is a bigger factor for her than abortion.

“I think obviously some people are going to put that at the top of their list, but if you can’t pay your bills, if you can’t buy food, if you can’t hang on to a job with the stock market going up and down and we’re going into a recession, as far as I’m concerned, abortion is not that crucial.”

But Kimberly Valcin, a first time New Hampshire voter and Democrat who greeted Hassan at a campaign stop in Hanover, told NPR, “Top of mind issues for me are things like women’s rights.”

Hassan campaigns on record, Bolduc zeroes in on inflation woes

In her pitch to voters and in an interview with NPR, Hassan pointed to her accomplishments — and the fact many bills she passed were bipartisan. “I have a record delivering on a number of issues, doing it across party lines, and doing it the way Granite Staters expect me to.”

She spoke about the infrastructure bill delivering money to road and rail projects, as well as legislation boosting American manufacturing of semi-conductors that will help small businesses in the state and resolve supply chain issues that many complain are still hurting their bottom lines. Hassan also touted the bill Democrats passed without GOP support that includes tax cuts for energy efficient improvements and lowers prescription drug prices.

Hassan made a point to put some distance between herself and President Biden on the economy, saying “The administration was too slow to recognize the long term reality of inflation. And they took too long to react to it.” She noted she was among those pressing the White House to tap additional oil from the Strategic Petroleum Reserve, a step announced last week.

Bolduc devoted much of his time at campaign stops arguing that Hassan is out of touch with the reality of rising costs. At a steel company in Greenland, Bolduc lumped Hassan in with “career politicians” and repeatedly described his opponent’s Senate term using one word.

He said he’d turn things around.

“I’ll go to Washington, D.C., to be your United States Senator and work on the real problems that Americans and Granite Staters are having right now.”

He said he wanted to “reverse some of the things that they [Democrats] have done that have created all this inflation.” Bolduc also criticized Democrats’ record on border security, crime and education policies. He promised that if elected, he would work with members of Congress across party lines, and said that the first call he would make as senator would be to the state’s other Democratic senator, Jeanne Shaheen, to try to address economic issues and secure the border.

One steel company employee, Shelley Hanson, identified herself as a Democrat, but said she’s still deciding which candidate to support. She voted for Biden in 2020 but is not a fan of the system in Washington. “I think it needs to change course. I think the whole thing needs to be shaken up,” she said.

Both candidates and their allies are flooding the airwaves, fighting for the state’s independent voters.

In recent days, the Senate Leadership Fund, the Super PAC with ties to Senate Minority Leader Mitch McConnell, withdrew resources it had earmarked for Bolduc in the final stretch of the campaign, a signal they believe Hassan is positioned to prevail.

Still, Bolduc’s spokeswoman, Kate Constantini, said in a statement that the Republican nominee has “defied the naysayers from the beginning and that’s the same approach he is going to take through the finish line to victory.”

Hassan warns that Bolduc is extreme on a range of issues, and says the resources already spent in the state “can conceal an extremist from voters.”

One Hassan supporter, Jenn Alford-Teaster, says one thing is constant in the purple state. “I don’t think there will ever be a race in the history of New Hampshire that will never not be close.”

Republicans need to net just one seat to retake the majority on Nov. 8. A lot of attention is focused on contests in Georgia and Nevada, but the political fate of the Senate could also be decided in New Hampshire.