Rishi Sunak will become the next U.K. prime minister 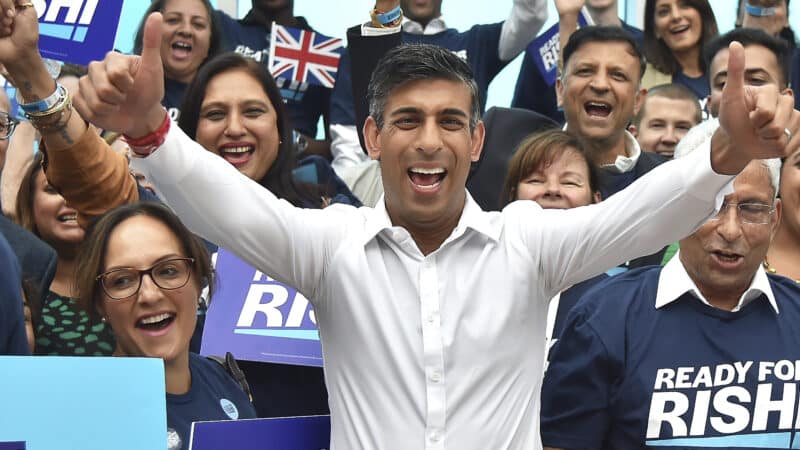 LONDON — Rishi Sunak is now all but guaranteed to become Britain’s next prime minister after both the leading contenders considered his rivals in the race to replace Liz Truss pulled out before a single vote was cast among members of the Conservative party.

Considered a centrist and pragmatic politician, he emerged in the latest leadership contest as a safe pair of hands to guide the U.K., after Liz Truss’ policy proposals around tax cuts and spending shook the government’s credibility and spooked markets.

Sunak’s rise in British politics has been nothing short of meteoric. After entering Parliament in 2015 after a career in banking, Boris Johnson appointed him just five years later as finance minister — a role formally known as chancellor of the Exchequer, the U.K.’s Treasury.

But the fact such a senior political leader in Britain has a family background that is nonwhite — with both his parents of Indian origin — has only become commonplace in the past handful of years.

“That is a very, very recent development,” says Sunder Katwala, director of British Future, a think tank that researches issues around immigration, integration, race and identity.

He says since David Cameron became prime minister, the Conservative Party has placed an emphasis on putting more ethnic minorities in senior positions inside the government.

“Ethnic diversity has become a new normal at the top table of British politics,” Katwala acknowledges. “In the last five years, we’ve seen ethnic minority chancellors of the Exchequer, home secretaries, foreign secretaries at a remarkable pace. Everyone’s got used to that and everybody thinks you shouldn’t make too much of that.”

It is only seven weeks since Sunak lost the top job to Liz Truss in this year’s first Tory leadership contest, following Boris Johnson’s resignation amid a swirl of scandal in July.

But after the Truss administration imploded following a failed rollout of unfunded tax and spending plans, Sunak — and the entire U.K. — faces enormous economic challenges.

Supporters say men like Sunak will be viewed as role models by the U.K.’s South Asian community, particularly those who are looking to enter politics.

But Sunak is also likely to face intense scrutiny, since he himself comes from a particularly privileged background and his wife, an Indian-born IT heiress, was until recently not paying the top rate of British tax as a fully domiciled U.K. resident.

Bronwen Maddox, the chief executive of the London-based think tank Chatham House, says that one silver lining amid all the chaos of recent weeks is that it “has forced someone with economic competence to the top of the Conservative field, and it has also forced Labour, the main opposition party, to put together a platform based on a claim to financial coherence, competence, things that Labor hasn’t always been associated with in the past.”