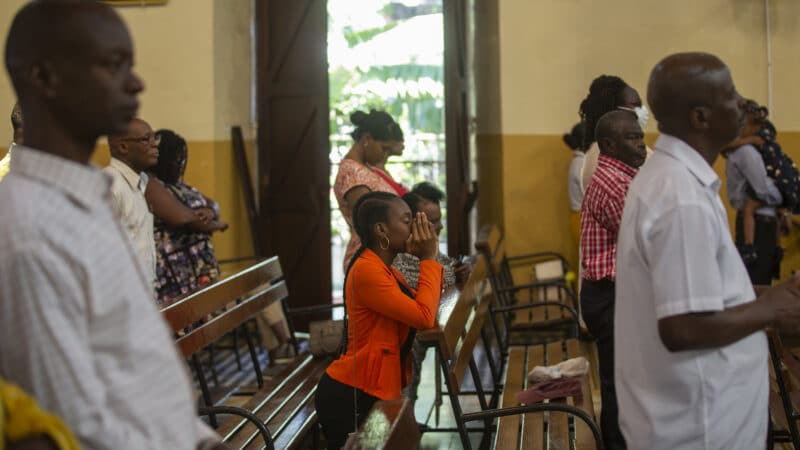 PORT-AU-PRINCE, Haiti — Johnny Jean Batiste used to go to church to pray for his family, his health and sometimes his material needs.

But now, the 29-year-old says his country, Haiti, needs his prayers.

“There is one thing I am asking God: It is, give us peace,” Batiste says, sitting in St. Pierre Catholic Church in the Pétion-Ville district of Port-au-Prince.

Most Haitians are staying home these days, because they don’t have fuel and, even in rich neighborhoods like this one, gangs are trading gunfire and kidnapping residents off the streets. But on this Sunday, the pews are packed with Haitains seeking solace. Batiste says he hasn’t been working, so he put on a crisp black dress shirt and he came to Mass to try to clear his head.

“As a young man, I believe that things can change, because if things remain the same, that will be the end of my life,” he says in French and Creole.

Long the most impoverished country in the Western Hemisphere, Haiti is on the verge of collapse under a mountain of crises. The population is experiencing unprecedented hunger here. Gangs have a stranglehold on much of the capital. Trash is piling up in streets and canals, which causes flooding in homes. And cholera is on the rise, again.

Now, world powers are considering a recent Haitian government request to send international armed forces for urgent help alleviating a wide range of problems. But while many Haitians express deep distrust of an international troop presence after a history of troubled foreign intervention, citizens also say they are outraged that their own government is absent.

Cholera adds to the chaos

The desperation is apparent as soon as you arrive in the main airport in Port-au-Prince. Across the street, at Hugo Chávez Square, there is a growing camp for people who have been pushed out of their homes and neighborhoods by violence.

Outside a makeshift shelter there, 27-year-old Fabiola Julme is washing clothes in a bucket. She says gangs burned down her house, but she had nothing to do with rival gangs. She’s just a mother trying to live.

There’s no government presence at the camp. When asked where the authorities may be, people shrug. There’s no clean drinking water and people are sleeping on wet ground in makeshift tents.

One man walks across the camp, screaming in disbelief, “How can we live like this?”

In another corner, Shelan Joseph cradles her 2-year-old son. Malnutrition has lightened his hair and made him so skinny, you can see his bones through his skin. Joseph, who’s 33, says she has no money to take him to the doctor.

“I have been trying to breastfeed him, but all he does is cry. I cannot really feed my baby. When he eats, he vomits the food,” she says.

Added to the chaos is cholera — an extremely virulent disease that can spread in places lacking clean water and sanitation.

Haiti has reported more than 2,000 suspected cases of cholera and 55 deaths from the disease, according to the Pan American Health Organization’s Oct. 24 report. A large number of those infected are children.

Thousands of Haitians died in the last cholera outbreak in the country in 2010, after infected sewage from a United Nations peacekeepers camp contaminated a river.

Jean-Martin Bauer, the country director for the World Food Programme, says the situation in Haiti is the worst it has ever been. This the first time his agency has classified any population in the Americas as being on the verge of famine.

Bauer says that in the some of the neighborhoods under siege, some mothers are boiling water with salt because that’s all they have to feed their children.

He says the WFP is trying to get food into those places, but even humanitarians are facing danger.

“When my staff can’t come to the office because they’re being threatened of being attacked or raped or burned, there’s only so much that can be done in this kind of environment,” he says. “So we’re doing our best.”

Haiti is at a breaking point

This latest crisis kicked off after the assassination of President Jovenel Moïse last year created a power vacuum. The man appointed as prime minister after his death, Ariel Henry, remains the de facto authority but lacks public support and his constitutional mandate has expired. Gangs, which for decades received weapons and support from corrupt politicians, have seized the moment.

Since mid-September, after the government announced the end of fuel subsidies, gangs have blocked Haiti’s main fuel terminal preventing trucks from getting fuel. After over two months of the blockade the police finally managed to shatter the blockade, but it still remains to be seen whether fuel makes its way to the wider population quickly. Already the damage has been done.

Patrice Dumont, a Haitian senator, tells NPR he believes corruption has infected every corner of the country, and the Haitian people are paying the price.

“Haiti is at a breaking point,” Sen. Dumont says. “We have no justice. We are supposed to have 30 members for the Senate — we only have 10. Our economy is completely destroyed.”

The multiple security, humanitarian and economic crises are so dire that, in early October, Prime Minister Henry and 18 Cabinet ministers issued a letter asking the international community to urgently send in troops. Despite multiple requests for an interview with the Prime Minister to talk about the current situation, NPR never received a response.

The head of the U.N. urged nations to consider the request, and the United States and Mexico proposed a resolution in the U.N. Security Council, but so far the member states haven’t made a decision.

Last month, the Security Council did approve economic sanctions, travel ban and arms embargo against Haitian gangs. And this week, the U.S. sanctioned two prominent politicians, including the Senate President Joseph Lambert, accusing him of ties to gangs and international drug trafficking.

But many in Haiti, from street protesters to intellectuals to politicians, say the foreign intervention is a bad idea.

Intervention is a dirty word

Haiti has a long history of foreign intervention, including an occupation by the U.S. from 1915 to 1934. But none has led to long-term solutions — and they’ve often led to more problems.

Yet Georges Michel, a Haitian historian who has written several books about Haiti, believes intervention may be the only option.

This is all painful, he says, because Haiti — which overthrew enslavers and French colonial rulers in the 1800s to become the first Black-led republic in modern history — cherishes its sovereignty. Past U.S.-led incursions, also in 1994 and 2004, were seen as humiliating by Haitians.

But Michel says: “I would say something in French: ‘Nous ne sommes plus à une humiliation près.’ ” It means, “Another humiliation won’t make much of a difference.”

Haitians rally against another humiliation

But talk to people in the streets of Haiti, and the overwhelming response is emphatic against another foreign intervention.

There are almost daily protests calling for Prime Minister Henry to resign. And there’s a new chant: “Down with the prime minister! Down with the occupation!”

Sometimes the demonstrations have turned violent. But at one protest on a recent Monday, the mood was light, yet the messages were complex. Someone in the crowd hoisted a Chinese flag; others carried Russian flags — anti-U.S. imperialism gestures.

Speaking to NPR, protest organizer Nicolson Pierre launches into a list of grievances against the U.N. peacekeeping forces who were last in the country 2017: “All they brought was kidnappings and rape and cholera,” he says. “If the U.N. sends troops to Haiti, the fighting will get even more intense.”