Recycling plastic is practically impossible — and the problem is getting worse 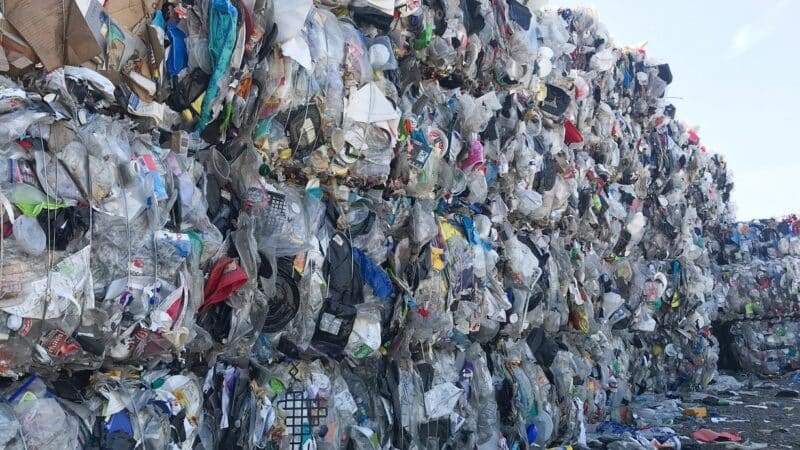 The vast majority of plastic that people put into recycling bins is headed to landfills, or worse, according to a report from Greenpeace on the state of plastic recycling in the U.S.

The report cites separate data published this May which revealed that the amount of plastic actually turned into new things has fallen to new lows of around 5%. That number is expected to drop further as more plastic is produced.

Greenpeace found that no plastic — not even soda bottles, one of the most prolific items thrown into recycling bins — meets the threshold to be called “recyclable” according to standards set by the Ellen MacArthur Foundation New Plastic Economy Initiative. Plastic must have a recycling rate of 30% to reach that standard; no plastic has ever been recycled and reused close to that rate.

“More plastic is being produced, and an even smaller percentage of it is being recycled,” says Lisa Ramsden, senior plastic campaigner for Greenpeace USA. “The crisis just gets worse and worse, and without drastic change will continue to worsen as the industry plans to triple plastic production by 2050.”

Waste management experts say the problem with plastic is that it is expensive to collect and sort. There are now thousands of different types of plastic, and none of them can be melted down together. Plastic also degrades after one or two uses. Greenpeace found the more plastic is reused the more toxic it becomes.

New plastic, on the other hand, is cheap and easy to produce. The result is that plastic trash has few markets — a reality the public has not wanted to hear.

Trent Carpenter, the general manager of Southern Oregon Sanitation, says when they told customers a couple years ago that they could no longer take any plastic trash other than soda bottles and jugs — like milk containers and detergent bottles — people were upset. They wanted to put their strawberry containers, bags, yogurt cups and all manner of plastic trash in their recycling bin.

That message has been difficult for the public to absorb with so many different bins in public spaces, and their own communities telling them to put their plastic in recycling containers.

Carpenter says they wanted to be transparent with their customers and tell them the truth, unlike companies that continue to tell customers that plastic, such as bags and containers, is being turned into new things.

“Politically it’s easier to just say ‘Gosh, we’re going to take everything and we think we can get it recycled,’ and then look the other way,” Carpenter said of the other companies. “That’s greenwashing at its best.”

Greenpeace found a couple facilities are trying to reprocess cups and containers — sometimes called “number 5s” because of the markings on the containers. But the numbers are low. While 52% of recycling facilities in the U.S. accept that kind of plastic, the report found less than 5% of it is actually repurposed — and the rest is put into a landfill.

The low reprocessing rates are at odds with plans from the oil and gas industry. Industry lobbyists say they plan to recycle every piece of plastic they make into something new by 2040. In interviews with NPR, industry officials were unable to explain how they planned to reach a 100 percent recycling rate.

An NPR investigative report found in 2020 that industry officials misled the public about the recyclability of plastic even though their own reports showed they knew as early as the 1970s and 1980s that plastic could not be economically recycled.

The American Chemistry Council, an industry lobby group, did not respond to NPR’s request for comment on the Greenpeace report.

Environmentalists and lawmakers in some states are now pushing for legislation that bans single use plastics, and for “bottle bills” which pay customers to bring back their plastic bottles. The bills have led to successful recycling rates for plastic bottles in places like Oregon and Michigan, but have faced steep resistance from plastic and oil industry lobbyists.

“The real solution is to switch to systems of reuse and refill,” Ramsden said. “We are at a decision point on plastic pollution. It is time for corporations to turn off the plastic tap.”

After years of embracing plastic recycling, many environmental groups say they hope the public will finally see plastic for what they say it is — trash — and that people will ask themselves if there is something else they could be using instead.

And right off the top, I want to be clear here. We have got some frustrating news for you. You see, the vast majority of plastic that Americans are putting into recycling bins is not actually getting recycled. That’s the finding of a new report out today from Greenpeace. And this may not be surprising for those of you who have followed NPR’s own reporting, which found that oil and gas companies misled the public for years into believing that plastic could be recycled, even though they knew it wasn’t true. Plastic waste, I mean, it’s now expected to triple by 2060, all while the amount of plastic that’s recycled into new things continues to drop dramatically. Here to sort through all of this is NPR investigative correspondent Laura Sullivan. Hi, Laura.

CHANG: OK, so this is going to be really confusing for a lot of people, right? Like, we all see these recycling trucks pull up to the curb, haul away plastic, all these specialized recycling bins in parks and airports. Like, what is going on?

SULLIVAN: Yeah. So for 30 years now, the public has hoped with every bottle and strawberry container and yogurt cup that they thoughtfully put in those bins that that plastic was going to go on to a happy new life somewhere as something else. But the truth is that it’s not, and it likely never has. Greenpeace’s report confirms what a lot of environmentalists have been saying for a while now, that aside from a few soda bottles and containers like milk jugs, there are no markets for used plastic trash. It’s not economically feasible to collect it, to sort it or to sell it. And new plastic is cheap, and it’s easy to make.

CHANG: I mean, it’s kind of breathtaking. What about all the plans that we have heard about over the years for soda bottles and other plastics to be in some so-called closed loop where. Like. The plastic is recycled and reused again and again? What happened to that?

SULLIVAN: Right. So what the science is showing now is that even in the best scenarios, plastic can only be recycled once or twice before the chemicals break down. And this Greenpeace report notes that that plastic also becomes more toxic every time it’s broken down. It’s very different from steel and aluminum. I mean, you can melt and reform steel and aluminum for decades. And, you know, even if you do turn a few soda bottles into new shoes or jackets or carpets, it’s just a temporary stop. Eventually, those shoes and carpets are going to become trash, too.

CHANG: Well, then, Laura, if none of this plastic is really recyclable, then where is that recycling truck taking it?

SULLIVAN: What the Greenpeace report found is that even though it may first go to a recycling center on that truck, that most of it is just getting landfilled, and some of it is winding up in poor countries or in the oceans. This is backed up by a lot of government numbers. After three decades of trying to recycle, the amount of plastic that actually gets turned into something new has now dropped to around 5%. And that will probably continue to get worse because every year, the amount of plastic produced increases. I wanted to get a sense of what this really looks like on the ground, so I reached out to Trent Carpenter, who runs Southern Oregon Sanitation. Carpenter told his customers a couple years ago that when it came to plastic, they could only put soda bottles and jugs into their recycling bins – no other plastic.

SULLIVAN: Carpenter told me that putting most plastic in a bin is just an expensive way to send it to a landfill.

CHANG: Then why are so many trash haulers and even officials saying, go ahead, put your clamshells and all this other plastic into recycling bins?

SULLIVAN: Right. I asked Carpenter this very question. This is what he told me.

CARPENTER: It’s easier, to be perfectly honest. Politically, it’s easier to just say, gosh, we’re going to take everything and we think we can get it recycled and then look the other way. That’s greenwashing at its best.

CHANG: I mean, this is really depressing. What are people supposed to do?

SULLIVAN: Environmentalists really want to bring the conversation back to deposit bills, which can improve the conversation for plastic bottles. But they really want people to look at what they’re holding in their hands and saying this is actually trash. It’s not going to be turned into something else.

CHANG: That is NPR’s Laura Sullivan. Thank you so much, Laura.