Race in college admissions is back in front of the Supreme Court. Here’s what to know 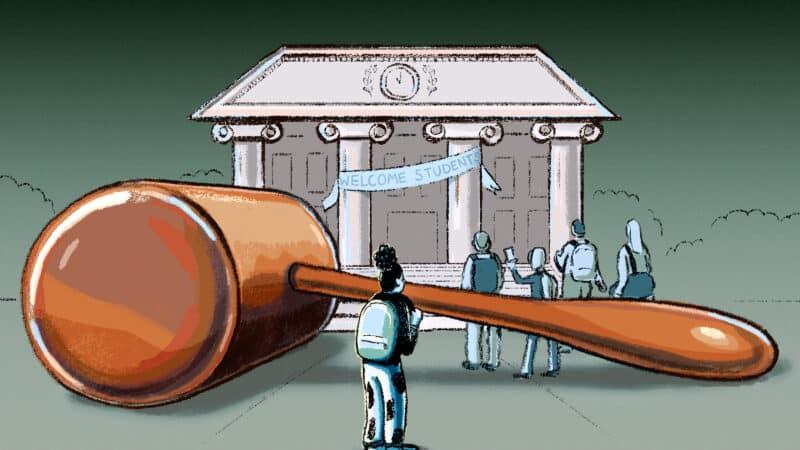 On Monday, the U.S. Supreme Court will begin hearing two cases – one involving Harvard University, and the other the University of North Carolina at Chapel Hill – challenging the constitutionality of race-conscious admissions policies.

Race in admissions has been the subject of plenty of lawsuits – including at the Supreme Court level. And if the court decides to reverse more than 40 years of legal precedent, it could impact the way race is used in higher education beyond just admissions.

The last time the court ruled on affirmative action was in 2016 when it said colleges can consider race in admissions. But the makeup of the court looks very different today than it did back then.

“I can’t think of that many people who are expecting race-conscious admissions policies to be upheld,” says Dominique Baker, a professor of education policy at Southern Methodist University. “So the question is how far do they cut it off?”

The conservative activist group Students for Fair Admissions (SFFA) is behind both the Harvard and the UNC cases. The suits claim that Harvard and UNC’s admissions practices use race in a discriminatory way.

While very similar, the cases represent two very different admissions environments: UNC is a state school that highly favors in-state students (it’s only allowed to admit 18% of first-year students from out of state) while Harvard is a highly selective private school that admits fewer than 5% of applicants (that’s just under 2,000 students this fall).

Affirmative action in admissions has been considered (and reconsidered) many times

Before that 2016 ruling, in which the Supreme Court determined that the University of Texas’ use of race in admissions did not violate the Equal Protection Clause, the court had already ruled several times on affirmative action.

In 1978, the court ruled on a case involving a white man who was denied admission to medical school at the University of California, Davis. In that decision, the court found race could be used as a factor in the admissions process, but racial quotas were not allowed.

Just a few years later, in 2006, voters in Michigan approved an amendment to the state constitution that banned affirmative action programs in higher education.

Michigan is one of eight states with such bans, including California, which banned the use of race in admissions in 1996. That state then attempted to reverse the ban through a ballot initiative in 2020. Voters chose to keep the ban in place.

Using race in admissions isn’t the only way states and colleges have tried to diversify their incoming classes.

After California banned race-conscious admissions in 1996, the proportions of Black and Latino students at the University of California, Los Angeles fell drastically. By 2006, a decade later, only 96 Black students enrolled in a freshman class of nearly 5,000. They became known as the “Infamous 96.”

UCLA responded to those numbers by recrafting its admissions policies to take a more “holistic” approach, considering several factors including whether students were the first in their family to go to college, what high school they went to and their family’s income.

Other ideas include admitting a percentage of the state’s high school students, like the University of Texas at Austin which automatically admits Texas students in the top 6% of their high school graduating class. Lotteries have also been proposed, where eligible students with high qualifications are randomly selected for acceptance.

But so far, researchers say, none of the alternatives have been as effective as race-conscious admissions.

“Nothing is as good at helping to enroll a more racially equitable class than using race. Nothing comes close to it,” says Baker, at Southern Methodist University. “There are other tools. Other ideas. But if race is not taken into consideration, those different types of techniques and tools do not replicate what race-conscious admissions policies do.”

In two amicus briefs filed ahead of the Harvard-UNC arguments at the Supreme Court, the University of Michigan and the University of California, Berkeley both admitted their efforts to meet their diversity goals without using race were falling short.

But not every school says it is struggling to achieve diversity without race-conscious admissions. The attorney general of Oklahoma filed a brief on behalf of several states in support of SFFA, saying, “The University of Oklahoma, for example, remains just as diverse today (if not more so) than it was when Oklahoma banned affirmative action in 2012.”

“Do we end and tackle racial discrimination by acknowledging the ways that it plays a role in our society, and address those ways [in higher education]?” Garces asks. “Or do we just end [racial discrimination] by prohibiting institutions from considering race altogether? That’s the misconception and the incorrect presumption that would only exacerbate those inequities.”

Other race-conscious efforts in education could also be at stake

There are nearly 4,000 colleges and universities in the U.S., and only a small portion – slightly more than 200 – have highly selective admissions where fewer than 50% of applicants get in. That’s just over 200 schools where a race-conscious admissions process could make a significant difference in who gets in.

And yet, despite how few students these policies would actually impact, “it matters a lot what the Harvards of the world do,” Tiffany Jones told NPR in 2019, when she was director of higher education policy at the Education Trust.

“We have to think beyond just the who-gets-in and who-gets-to-enroll piece,” Dominique Baker explains. “This affects things like if there are any additional groups, community events, if there are additional scholarships in any sort of race-conscious policies, that they could be on the chopping block based on these decisions.”

Baker wonders if a program designed to increase the number of black doctors – with support to complete the pre-med curriculum and get into medical school – could be called into question.

Mitchell Chang, who studies diversity in education at UCLA, says that’s what has happened in states that have banned race-conscious admissions by ballot measure. Michigan, California and Washington all moved to modify what were once more targeted “race-conscious scholarships, race-conscious programming, race-conscious recruitment,” he says. “So it may have a much broader sweep, in fact, than just with admissions.”

“I am deeply worried about the end of the use of race in any educational setting,” says OiYan Poon, a visiting education professor at the University of Maryland, College Park.

She points to early court fillings from SFFA arguing “any use of race or ethnicity in the educational setting” is unconstitutional – not just in admissions.

On Monday, when oral arguments begin at the Supreme Court, Poon will be listening from the court steps with her 7-year-old daughter. She’ll be most attuned to the justices’ questions – to better understand the potential implications on colleges.