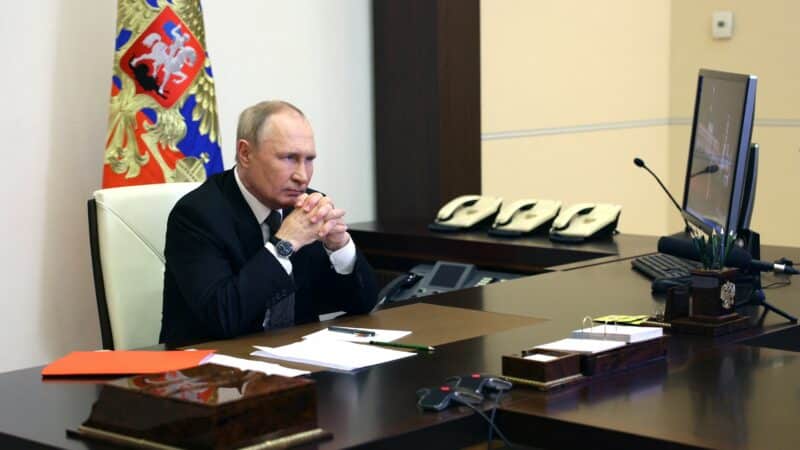 Speaking to his Security Council by video feed, Putin said the martial law order would take effect early Thursday in the occupied Ukrainian territories of Luhansk, Donetsk, Kherson and Zaporizhzhia.

Putin framed the move as driven by the Ukrainian government’s failure to accept the results of staged referendums in the four regions that were widely denounced by the international community as a sham.

“As is well-known, the regime in Kyiv has refused to recognize the will of the people. They deny any attempts at negotiations. They continue with shelling, civilians are dying,” Putin said. “We are trying to resolve difficult large-scaled challenges on providing security to Russia and protecting the future of Russia, defending our people.”

In September, Ukrainian President Volodymyr Zelenskyy signed a resolution to never negotiate with Russia so long as Putin is in power in Moscow.

A decree posted to the Kremlin website said a coalition of the government’s defense and security agencies — as well as a “special coordinating council” headed by Russian Prime Minister Mikhail Mishustin — would now have three days to come up with proposals to instill order.

Analysts and Ukrainian officials say the decree may not change much on the ground for populations living in parts of Ukraine already administered by Russia’s military or its proxies.

In a related decree, Putin announced heightened security for Russian regions bordering Ukraine. The provision gives governors additional powers to protect critical civilian and military infrastructure and restrict movement in and out of the territories.

The orders come as Russian forces have repeatedly ceded ground to the Ukrainian counteroffensive despite Russian claims to have formally annexed the territories last month.

Just hours before the announcements, the Moscow-backed proxy administration in Kherson ordered a civilian evacuation from the southern Ukrainian region as Kyiv’s forces were advancing.

In a video address, the Kremlin-installed administrator Vladimir Saldo called on residents to evacuate across the Dnipro River, a key defense line. He offered residents to relocate “in any part of Russia,” saying the Russian government would provide housing vouchers.

He said the battle for Kherson would “soon begin” and Russia’s forces would “fight to the end” not to surrender the area.

He added that residents whose homes might be damaged from shelling could receive compensation from the Russian government.

Earlier in October, Ukrainian forces in the Kherson region pushed the Russian line back by 20 miles, according to the President’s office and Deep State, an independent monitoring group.

“The Russians feel squeezed between our forces and the banks of the Dnipro, so they’re looking for ways to punish local communities,” said Natalia Humeniuk, a spokesperson for Ukraine’s southern command, on national television. Ukrainian commanders have set a goal to liberate Kherson by the winter.

Russia’s top commander in Ukraine suggested his forces may need to withdraw amid the Ukrainian advances.

In his first interview since being appointed to lead Russia’s armed forces in Ukraine Oct. 8, Gen. Sergei Surovikin told Russian state media that the situation in Kherson “very difficult” and refused to rule out “the hardest decisions.”

Surovikin — who has overseen the mass bombardment of Ukrainian cities since taking over — accused Kyiv of targeting civilians and said Russia’s focus was now on saving lives.

“We will operate with the goal of maximizing the safety of civilian population and our soldiers. That is our priority,” Surovikin said to the Zvezda channel, a state media outlet funded by Russia’s Defense Ministry.

The Institute for the Study of War, a Washington, D.C.-based think tank, suggested similar schemes are a “pretext for deporting Ukrainian citizens to Russian territory as they populate occupied areas with Russian citizens.”

It was unclear how many residents were heeding the Russian warnings to evacuate.

A travel ban for Kherson starts next week

According to Russian state media, Kherson residents received text messages with instructions to catch evacuation buses out of the city.

Separately, the Russian-backed authorities announced they were closing off travel into Kherson for the next week.

Kherson is one of four Ukrainian regions Russia claimed to have formally annexed following a series of staged referendums in September.

Both the so-called referendums and annexation bids have been widely denounced by the international community.

Despite claiming the lands as part of the Russian Federation, Moscow’s forces never managed to establish full control over the territories.