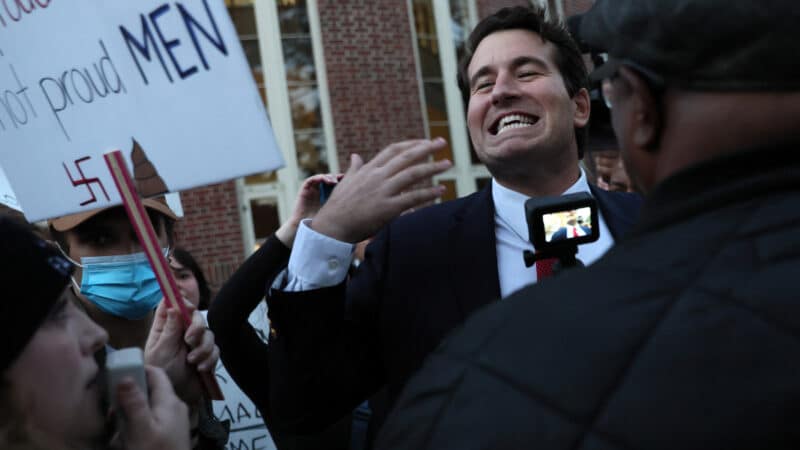 The event had an 8 p.m. start time, but by 7:15 p.m., the university said its police department deemed the event too dangerous to proceed.

It was an abrupt reversal for the school, which had condemned the views of McInnes and another far-right figure, Alex Stein, even as it said free speech concerns required it to host them for a student-organized event in State College, Pa.

Students who protested the event cheered its cancellation, shouting “Whose campus? Our campus!” as the Daily Collegian‘s Arthur LaBan reported.

“We are very disappointed” by the cancellation, the conservative student group Uncensored America, which organized the event, told NPR on Tuesday.

“We wanted people from all different political viewpoints to have a fun, entertaining, and peaceful evening,” the group added. “Sadly, attendees were intimidated by violent protests and could not enter the venue safely.”

The event had been touted as a comedy night

The program was dubbed “Stand Back & Stand By,” in a reference to former President Donald Trump’s message to the Proud Boys. But its organizers had billed it as a “provocative comedy night,” in what critics called an attempt to paint divisive hate speech as irony or satire.

At one point early in the evening, Stein walked into a crowd of protesters outside the building where he was to speak. Until then, Penn State President Neeli Bendapudi said, it had been a “peaceful protest.”

But tensions quickly rose as a smiling Stein walked through the crowd, training his phone’s camera on himself amid roars of disapproval and profanity. Stein posted video footage online in which he sought to agitate members of the crowd — with success: one protester whom he called his “favorite” spat on Stein’s jacket.

“It is unclear which individuals onsite then resorted to physical confrontation and to using pepper spray against others in the crowd, including against police officers,” Bendapudi said in a statement issued Tuesday.

The cancellation notice came less than an hour after Stein’s foray.

Protesters marched to the event venue

The decision to pull the plug on the event came after a mass of chanting protesters converged on the Thomas Building, where McInnes was to speak. Videos from the scene show standoffs between protesters and black-clad supporters of McInnes.

“Some brave people were pepper sprayed by hate group members,” said the Student Committee for Defense and Solidarity, which organized protests against the event. The group also blamed the university and police for “extraordinary repression,” citing officers who were on horseback or wearing riot gear.

The crowd of demonstrators were “approached by a line of state police in an effort to diffuse,” according to the school-run news outlet the Centre County Report. That show of force began as Penn State issued texts and emails warning students that they could be arrested if they didn’t leave the area.

Before reaching the building where McInnes was to speak, the large group of protesters marched through campus, chanting against racism and white supremacy.

The Proud Boys are a hate group, according to the Southern Poverty Law Center. And while McInnes denies such allegations, the center alleges that he purports “to reject white nationalism while espousing a laundered version of popular white nationalist tropes.”

More than two dozen Proud Boy members, including several leaders, have been named in federal charges over the Jan. 6 attack on the U.S. Capitol, including accusations of seditious conspiracy.

As they allowed plans for the event to move forward, Penn State officials emphasized that the school doesn’t agree with what they described as the speakers’ “repugnant and denigrating rhetoric.”

The university had urged students to attend counter-programming on Monday, from a session on misinformation to a unity rally. Bendapudi said the people protesting at the Thomas Building were also exercising their right to free speech.

After the cancellation, the only people celebrating are the agitators, Bendapudi said.

“Tonight, the message too many people will walk away with is that one can manipulate people to generate free publicity, or that one can restrict speech by escalating protest to violence,” Bendapudi said. “These are not ideas that we can endorse as an institution of higher education.”

The University Park Allocation Committee, the student-led group that considers requests to use student-derived funds for events, had approved the event. The committee says its policies require it to observe “viewpoint neutrality,” to ensure a range of views is heard on campus.

The panel approved spending $7,522.43 derived from student fees for the event, including airfare for McInnes and Stein and a combined $6,500 in honorarium payments.

General admission tickets to the event were free on a first-come basis, with students getting priority. But attendees were also able to buy tickets — including a $99 “Royalty” package that guaranteed prime seating and the chance to have dinner with McInnes and Stein.

According to Uncensored America’s website, paid tickets were sold out for the event. In response to NPR’s question about whether other parts of the evening went ahead as planned, Uncensored America replied, “The dinner did not happen.”