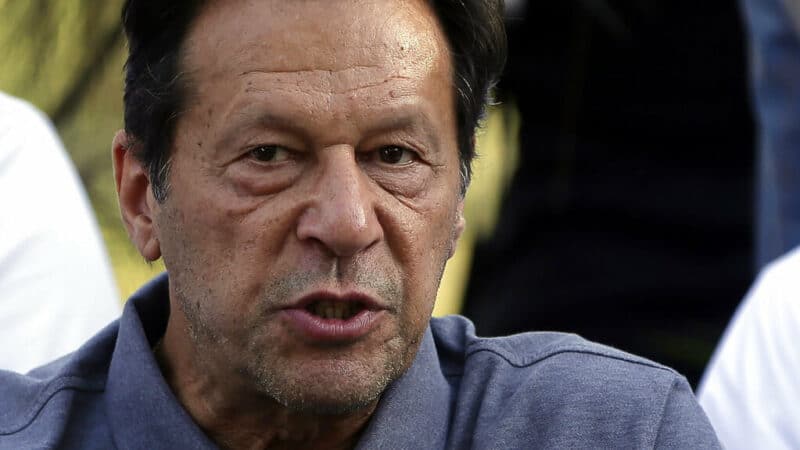 A gunman opened fire Thursday at a campaign truck carrying Pakistan’s former Prime Minister Imran Khan, wounding him slightly in the leg and killing one of his supporters, his party and police said. Nine others were also wounded.

The identity of the gunman, who was arrested at the scene, was not immediately known. No group has claimed responsibility for the shooting.

The attack raised new concerns about growing political instability in Pakistan, a nuclear-armed nation with a massive population of 225 million people. Since his ouster in a no-confidence vote in Parliament in April, Khan has mobilized mass rallies across the country, where he has whipped up crowds with claims that he was a victim of a conspiracy by his successor, Prime Minister Shahbaz Sharif, and the United States. Both the new premier and Washington have denied such allegations.

Pakistan has a decades-long history of political assassinations, including that of Benazir Bhutto, the first democratically elected female leader of a Muslim country, in 2007.

The attack on the Khan convoy happened in the Wazirabad district in the eastern Punjab province where the former cricket star turned Islamist politician was traveling in a large convoy of trucks and cars heading towards the capital, Islamabad. The convoy is part of his campaign aimed at forcing the government to hold early elections.

Among the wounded was Faisal Javed, a lawmaker from Tehreek-e-Insaf. In a video statement, with blood staining his clothes, Javed said Khan’s protest march to Islamabad would not stop.

District police officer Ghazanfar Ali said one person was killed and nine others were wounded in the attack. Interior Minister Rana Sanaullah Khan condemned the attack.

Fawad Chaudhry, a senior leader from Khan’s party, told the supporters surrounding Khan’s truck that the attack was an attempt on the life of the country’s former premier.

Khan was later seen with a bandage on his right leg, just above the foot, according to reports and a blurry image. He was moved to another vehicle from his container truck, from where announcements were being made that he was safe.

“He is being taken to a hospital in Lahore, but he is not seriously wounded. A bullet hit him in the leg,” Asad Umar, an official from Khan’s Tehreek-e-Insaf party, told reporters. According to the Interior Ministry, the government has ordered a probe into the incident.

Khan has been at loggerheads with the country’s powerful military and has refused to back down from his plans to march on the capital. The military has said that although Khan had a democratic right to hold a rally in Islamabad, no one would be allowed to destabilize the country. Authorities in Islamabad have already deployed additional security around the city to deter any clashes or violence.

The attack happened less than a week after Khan began his march from Lahore, the capital of Punjab province, along with thousands of supporters. It was not immediately known if Khan’s convoy would proceed on to Islamabad. Earlier, Chaudhry had said they plan to enter Islamabad on Friday.

Since his ouster in April, Khan has alleged that he was the victim of a conspiracy and has called for early elections.

Sharif’s government has said that there would be no early vote and that the next elections will be held according to schedule, in 2023.

Khan, who has challenged the disqualification in a pending court case, has said he would sue Chief Election Commissioner Sikandara Raja, who was behind the decision, for calling him a “dishonest person.”

It was not immediately known if Khan’s convoy would proceed on to Islamabad. Earlier, Chaudhry, the senior party leader, had said they plan to enter Islamabad on Friday.

The attack comes at a time when impoverished Pakistan is grappling with the aftermath of unprecedented floods that struck this Islamic nation over the summer, killing 1,735 people and displacing 33 million.