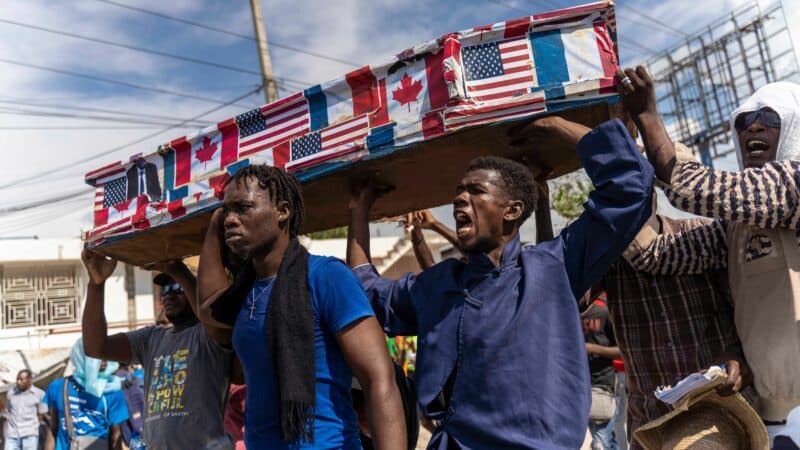 The United Nations Security Council is considering an international intervention in Haiti to open up aid corridors and resolve what the U.N. secretary-general calls an “an absolutely nightmarish situation.”

Armed gangs have blocked the main fuel terminal in the capital since last month and severed access to aid routes. The country has been wracked by weeks of unrest, with many taking to the street protesting against higher fuel and food prices, demanding the resignation of Prime Minister Ariel Henry. Nearly half the population faces acute hunger. And now the country faces an outbreak of cholera.

In response to this spiraling crisis, Henry has asked the international community to intervene with a “specialized armed force.” But the request has been met with horror by many in Haiti, who are more than familiar with the checkered history of foreign intervention and occupation.

The United States and Mexico have drafted two Security Council resolutions now under consideration. One would impose sanctions on armed gangs in Haiti and their supporters. The other proposes “a limited, carefully scoped, non-U.N. mission led by a partner country with the deep, necessary experience required for such an effort to be effective,” U.S. Ambassador to the U.N. Linda Thomas-Greenfield said at a Security Council briefing on Monday.

“If there was ever a moment to come to the aid of Haitians in dire need, it is now,” she said.

Thomas-Greenfield said the U.S. is considering how to support such a mission. Privately, administration officials are sounding cautious about U.S. boots on the ground and say diplomats are talking to countries in the region that could take the lead in a limited operation. So far, some officials including in the Bahamas and Guyana are reported to have voiced support for the proposal.

Diplomats say they expect a vote this week on the sanctions resolution, but that it will take more time to iron out plans for a possible armed intervention.

But the prospect of sending a new foreign military force to Haiti raises concerns for those familiar with the failures of past interventions there.

“You could have a military force come in and knock down the barricades and kill some of the gang members,” explains writer Jonathan M. Katz, who has written about Haiti.

But he says this will not resolve the country’s central problem, “which is that Haiti currently doesn’t have a functioning democracy. It doesn’t have a representative government.”

Katz, author of The Big Truck That Went By: How the World came to save Haiti and left behind a disaster, criticizes the U.S. for backing a “democratic vacuum” in Haiti since President Jovenel Moïse was assassinated in July 2021 and not supporting a plan to restore democracy, set out by a broad group of Haitians known as the Montana group.

The head of the United Nations Integrated Office in Haiti Helen La Lime says she supports a Haitian-led political solution. But so far, she says, that is “elusive and on its own is no longer sufficient to address the current crisis.”

U.N. Secretary-General António Guterres has called for “armed action” to free up the port and to allow for a humanitarian corridor.

The U.N. would not be in the lead, however, given its track record in Haiti. U.N. peacekeepers brought cholera to the island over a decade ago, causing an outbreak that killed thousands of people.

Ambassador Thomas-Greenfield said the U.N. Security Council should consider its role differently from the past. “To be clear, we are keenly aware of the history of international intervention in Haiti and specifically of concerns about the council authorizing a response that could lead to an open-ended peacekeeping role,” she said.

Many in the U.S. are also wary of Washington’s history of occupation and intervention in the Caribbean nation. In 1915, the U.S. invaded Haiti and occupied it for nearly two decades, ostensibly in an effort to restore order. But it left behind chaos.

Then in Operation “Uphold Democracy” in 1994, President Bill Clinton sent in more than 20,000 troops to restore ousted President Jean-Bertrand Aristide to power after a 1991 military coup.

Robert Fatton, a professor of government and foreign affairs at the University of Virginia, says Haitians know the poor record of foreign interventions and are not enthusiastic about them.

“On the other hand, the situation is very critical,” he says. An international force could help to establish some semblance of order. But he adds, “the big question is what happens afterwards.”