Nancy Pelosi is stepping down as a party leader. Who will replace her? 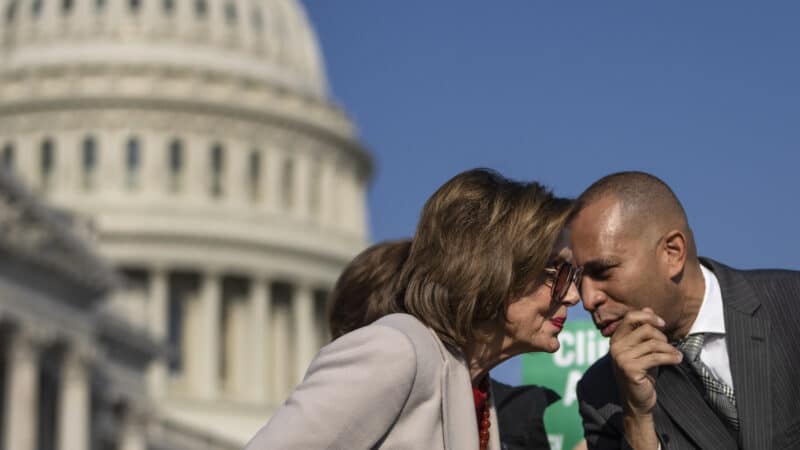 House Speaker Nancy Pelosi, D-Calif., announced Thursday her plans to step down from party leadership and remain in the chamber representing San Francisco. Now all eyes are on the open position of House minority leader and who may fill the spot.

“I hope the next leader is one who recognizes the beauty and brilliance of our diversity as a nation. I love how she talked about women in leadership during her speech. I loved how she mentioned the diversity of the incoming class,” said New York Rep. Jamaal Bowman, referencing a speech Pelosi gave on the floor earlier in the day. “And another theme of her speech was coming together. And that’s what I hope the next speaker does.”

Some rank-and-file Democrats have been calling for a shakeup in the current roster of leaders, a new generation to replace Pelosi, 82, who has led the caucus for 20 years, as well as current House Majority Leader Steny Hoyer, D-Md., and Rep. Jim Clyburn, D-S.C., who are also in their 80s.

Pelosi is not the only one to step aside. Hoyer announced he will not seek an elected leadership position for the 118th Congress.

“I think it’s time for new leadership and I think we have excellent opportunities. Very frankly, I think I could be elected, that was not the issue,” he said. “I think it’s always good for a party to have new blood and new invigoration, enthusiasm and new ideas.”

House Democrats are expected to hold leadership elections at the end of this month. Announcements from members for a bid are sure to come.

Here’s who to watch for:

Rep. Hakeem Jeffries of New York, 52, has long been believed to be one of the next in line should Pelosi step aside. Jeffries has served as chair of the Democratic caucus since 2019, was an impeachment manager during the first impeachment trial of former President Donald Trump and would be the chamber’s first Black Democratic leader, if elected. Both he and the Senate Democratic leader hail from Brooklyn, and Jeffries is known for quoting famous Brooklynite, rapper the Notorious B.I.G., in his floor speeches.

Hoyer sent a letter to Democratic members on Thursday issuing his endorsement for Jeffries to be minority leader.

Rep. Katherine Clark of Massachusetts, 59, is expected to be a strong contender to be the next minority whip. Clark most recently served as assistant speaker during this congressional session and worked alongside Pelosi as the two women in party leadership.

Rep. Pete Aguilar of California, 43, is expected to be a contender for caucus chair — Jeffries’ current role. Aguilar, who currently serves as the Democratic caucus vice chair, is the highest ranking Latino in Congress and gained more prominence as a member of the House select committee investigating the Jan. 6 attack on the Capitol.

Clyburn also issued a statement generally supporting all three, though he has not yet announced whether or not he is rerunning.