N.Y. officials announce plans for a memorial to the victims of the Buffalo shooting 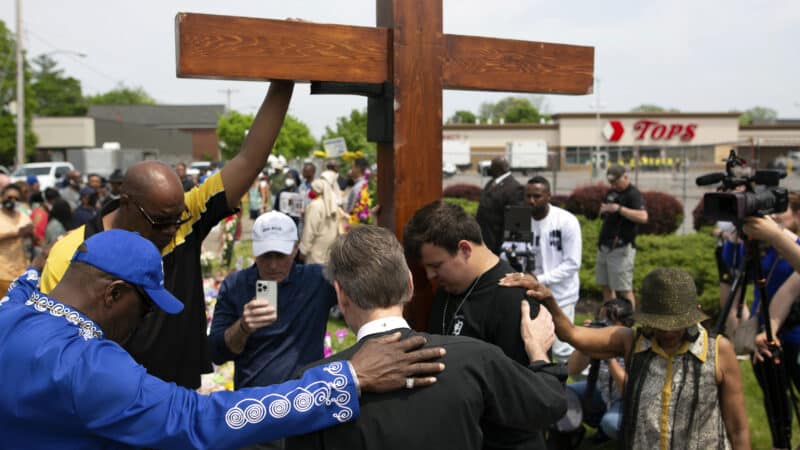 Five months after a white gunman killed 10 Black people and injured three others at a Buffalo, N.Y. grocery store, New York state and local officials and community members are working together to honor the victims killed with a new memorial in Buffalo’s East Side.

New York Gov. Kathy Hochul and Buffalo Mayor Byron Brown announced this past week the creation of the May 14th Memorial Commission, which will work to build a permanent memorial to honor the victims of the May 14 deadly mass shooting.

Establishing the memorial commission is part of the state’s long-term commitment to support and uplift the East Buffalo community following the racist attack, they said.

“We want to do something that people remember. A place to come and reflect. A place to honor. And a place to say never again,” Hochul said during a news conference announcing the commission on Friday.

The memorial commission — whose efforts will be led by the Buffalo NAACP president, the Rev. Mark E. Blue — will focus on siting and acquiring land for the new memorial, engaging with victims’ families and the Buffalo community for input on the memorial’s design in addition to securing funds for the project.

The memorial will be “sensitive to what the families want,” according to Hochul.

“Our community was deeply affected by the events of May 14, 2022, and the May 14th Memorial Commission will bring transformative ideas to the forefront that will aid in the healing and create a symbol of remembrance,” Brown said during a news conference.

Hochul and Brown did not go into further detail as to when the memorial will be completed.

Garnell Whitfield, who lost his mother Ruth Whitfield in the shooting, told Buffalo TV station WKBW that it’s appropriate to immediately begin the process of creating the permanent memorial to honor the victims.

“It is my prayer that as we begin this journey, it will provide the opportunity for our community to come together in love in a united effort that will honor all of those who have suffered under the weight of white supremacy,” Whitfield said in a statement.

The attorney general’s office reviewed thousands of pages of documents and social media content to study how the gunman allegedly used online platforms to plan, prepare and publicize the mass shooting.

As a result of the investigation, both New York Attorney General Letitia James and Gov. Hochul said they support state legislation to criminalize images and videos created by a perpetrator of a homicide.

He has been held without bail since his arrest after the May 14 shooting.