Money will likely be the central tension in the U.N.’s COP27 climate negotiations 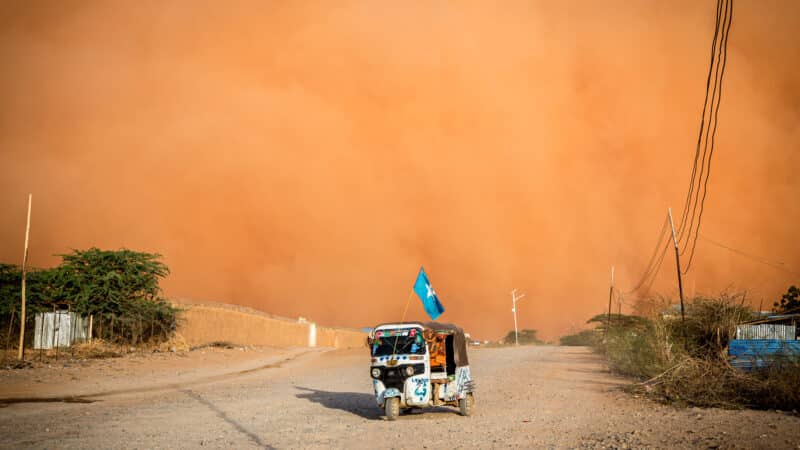 As the United Nations climate conference opens in Egypt, the most critical talks will likely focus on the soaring costs of limiting — and adapting to — global warming, especially in the world’s most vulnerable countries. It’s a contentious conversation more than a decade in the making.

In 2009, industrialized countries pledged to provide developing nations with $100 billion a year in climate financing by 2020. The agreement is rooted in the fact that developed countries generated most of the heat-trapping pollution now in the atmosphere, while developing nations have already begun to bear a disproportionate share of the harm from extreme weather.

That 2020 deadline came and went without rich countries delivering on their promises.

Global efforts to limit climate change are in jeopardy without more aid, experts say. Developing countries need money to move to renewable energy so that their economies can grow without driving up greenhouse gas emissions. They also need funding to deal with the impacts they’re already facing from rising temperatures. Scientists say it’s likely climate change helped fuel floods in Pakistan that killed at least 1500 people this summer, and that it contributed to torrential rain that triggered floods and landslides in South Africa.

Now, rampant inflation and an energy crisis caused by Russia’s war in Ukraine could complicate efforts to convince developed nations to make good on their financial commitments. That’s to say nothing of the need to boost future obligations in line with the trillions of dollars that developing countries will actually need to prepare for a hotter Earth.

“The challenge is going to be, how do we maintain momentum when there are so many short-term crises and pressures, and yet the climate crisis is intensifying?” says Amar Bhattacharya, who is part of an independent group of experts that was convened ahead of COP27 to advise conference leaders on how to increase climate financing.

Despite the turmoil, rich countries face pressure to come up with the money they promised in order to keep developing nations on board with efforts to cut global emissions, says Bella Tonkonogy, a director at the Climate Policy Initiative, a nonprofit that works with governments and businesses to promote economic growth while addressing climate change.

“Developed countries know that if we are to reach our global emissions reduction targets that everybody has signed up to, that developed countries need to have credibility and need to have trust established with developing countries,” says Tonkonogy. “And this question of finance is one of, if not the most critical components of establishing that trust.”

The latest tally by the Organization for Economic Co-operation and Development (OECD) shows developing countries received $83.3 billion from public and private sources in 2020.

But even with the financing provided so far, there have been problems and stumbling blocks.

The bulk of the money is being delivered through loans, which critics say add to the debt burden of governments that are already on shaky financial footing.

Mia Amor Mottley, prime minister of Barbados, has said developing nations should at least have access to loans on the same favorable terms that were offered to their counterparts in the developed world.

As an alternative, there are calls to provide more climate financing in the form of grants, which don’t have to be repaid, says Gaia Larsen, director of climate finance access and deployment at the World Resources Institute’s Sustainable Finance Center.

“[Hopefully], going forward, there will be means of making sure that countries are able to act on climate and that they’re able to do so without further getting themselves into trouble in terms of their debt levels and their ability to pay for all the things they need to pay for,” Larsen says.

There are also problems with how money is being allocated, according to climate finance experts.

Some impacts from climate change are irreversible, according to the UN, and even if countries could immediately stop emitting greenhouse gasses, the effects of global warming would still be felt for decades.

Yet most of the financing that’s being doled out is going to projects like wind and solar farms that are aimed at limiting further increases in global temperatures. That’s left a huge shortfall for projects like building flood defenses, or introducing drought-resistant crops that can help poorer nations cope with warming that’s already happened.

Meanwhile, it can be “tricky” for the most vulnerable countries to access funding, Larsen says. The process can require data and technical expertise to show how climate funding would be used, and how it would benefit the climate, and some developing countries lack the resources for these analyses

“We cannot stop putting emphasis on mitigation, because otherwise, the adaptation costs will just skyrocket,” says Mafalda Duarte, CEO of Climate Investment Funds, which works with multilateral development banks. But “we have already locked in further impacts down the road,” she says. “And who is bearing the cost, disproportionately? It comes down to the poorest and developing countries.”

For the past year, United States President Joe Biden has been pushing to quadruple U.S. climate funding for developing countries to more than $11 billion annually starting in 2024. About half of that money needs to be appropriated by Congress.

John Kerry, the United States’ special presidential envoy for climate change, has suggested that the president’s goal could be at risk depending on the outcome of midterm elections in the U.S.

“Simply put, we developed countries need to make good on the finance goals that we have set,” Kerry said in October at the Council on Foreign Relations in Washington, D.C.

But observers say those goals are just a drop in the bucket. BlackRock, the world’s largest asset manager, has said emerging economies will need at least $1 trillion a year to eliminate or offset their carbon emissions.

“[Raising] ambition in a way that is centered around real results is what I hope will come from COP,” says Bhattacharya, “rather than the rhetoric of the $100 billion.”

World leaders are gathering in Egypt for negotiations over how to deal with harmful changes in the Earth’s climate. The annual meeting of the United Nations is happening against the backdrop of a world in turmoil – inflation, the threat of recession and a war in Ukraine. At the same time, countries have to deal with the very real threats from a warming planet, with the world’s poorest countries facing some of the greatest risk. Michael Copley joins us from NPR’s climate desk to tell us what’s going on. Good morning.

RASCOE: So let’s start with the baseline. Countries have a set limit of how much they’ll let temperatures rise. But where are we right now in reality?

COPLEY: Yeah. So the goal is to keep average global temperatures from rising by more than 1.5 degrees Celsius by the end of this century. That’s about 2.7 degrees Fahrenheit, and we’re comparing it to the mid-1800s, the period right before industrialization took off. You get past 1.5 degrees, and scientists think catastrophic impacts from climate change are a lot more likely to happen. And right now, we’re on track to get a lot hotter than that. The U.N. says emissions that drive climate change have to be cut almost in half by the end of this decade to put us on track to hit that 1.5-degree target. World leaders so far have only promised to cut emissions by around 3%.

RASCOE: The U.N. says countries have to be a lot more aggressive in responding to climate change. I feel like they’ve been saying this for a very long time, but, like, is something really bold going to happen at this meeting this year?

COPLEY: I think people are really skeptical. You mentioned all the different challenges countries are facing right now. Those are all wild cards in these negotiations. And the reality is a lot of countries are falling behind on commitments they made years ago. That includes money that industrialized countries promised developing nations to help them deal with climate change. So this year’s conference really seems to be focused on turning promises into action. And that money that was promised to poorer countries seems like it’ll be at the heart of these talks.

RASCOE: And so these financial pledges – like, how much money are we talking about? And, like, what is it for?

COPLEY: Yeah. So about a decade ago, developed countries said they’d give poorer nations $100 billion a year in financing to help cut emissions and prepare for the impacts we’re already seeing. The most they’ve pulled together so far is about $83 billion in 2020. You know, the fact is industrialized countries are responsible for most of the emissions that are making the world hotter. But developing nations are the ones suffering some of the worst impacts right now, like the flooding in Pakistan this summer. That’s cost the country billions of dollars and killed more than a thousand people. These countries have fewer resources to deal with that kind of damage.

RASCOE: Is this about a sense of justice or fairness, or is it just logical that countries with more resources would put out more money?

COPLEY: I think there’s a moral element, but experts say it’s also in the interest of richer countries to give more funding to poorer countries. They say money’s crucial to keep developing nations on board with efforts to cut emissions. And if global warming isn’t kept in check, everybody’s going to be living in a more dangerous world. Bella Tonkonogy is the director at the Climate Policy Initiative. They promote economic development while addressing climate change.

BELLA TONKONOGY: Developed countries need to have credibility and need to have trust established with developing countries. And this question of finance is one of, if not the most, critical components of establishing that trust.

COPLEY: John Kerry, the United States special envoy for climate, says industrialized countries will meet their $100 billion pledge next year, but experts say that’s just a fraction of what poorer nations actually need. And Kerry has said efforts to boost U.S. funding for developing countries could be at risk, depending on the outcome of midterm elections this week.

RASCOE: Looking ahead a couple of weeks, like, what do people think a successful conference would look like this year?

COPLEY: It really does seem to be all about putting plans and promises into action, and that goes for governments as well as the private sector. Companies see a big opportunity to accelerate and also to profit from the fight against climate change. But a lot of that private investment is happening in developed countries, where there’s less financial risk. So there’s a big push right now to figure out how to attract more of that money to poorer countries.

RASCOE: That’s NPR’s Michael Copley. Thank you so much for joining us.