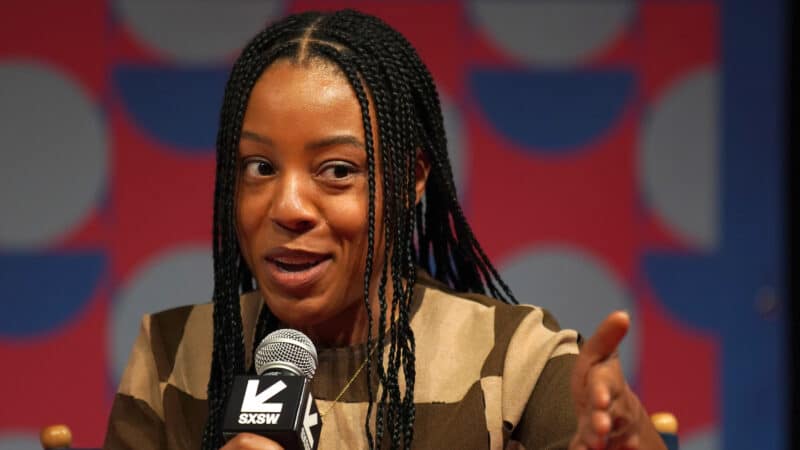 Alana Mayo is 38 years old. She’s Black, queer and a movie industry trailblazer who took over Orion Pictures in 2020.

The storied studio once produced such movies as Platoon, Dances With Wolves and the Silence of the Lambs, but it went bankrupt in 1991, was bought by MGM and more or less languished. Mayo’s job is to revive it — right when the entire industry is in massive upheaval — but she seems undaunted.

“The most [satisfying] part of my job is getting to make the kinds of movies I want to make inside of the Hollywood system,” she told NPR during an interview at her sunny hillside home in Los Angeles.

So far, those movies include Till, which has gotten critical raves for its depiction of civil rights martyr Emmet Till and his mother, and a high school romantic comedy that started streaming on Amazon this summer. Anything’s Possible is the directing debut of actor Billy Porter, who told CBS This Morning about making an upbeat story starring an empowered teen trans heroine:

“She gets a boyfriend,” he explained. “She goes to college. She’s going through the normal regular emotions.”

Greenlighting movies like these is a mission for the young studio executive who’s positioned to be a new face of Hollywood gatekeeping. Alana Mayo grew up in a Chicago suburb, and while she studied film and creative writing at Columbia University, she started to realize something about the movies she’d grown up loving.

“I couldn’t believe how homogenous they were in terms of who’s on screen and who’s behind the camera,” she said. “I was genuinely like — oh, this system is, by design, exclusionary of a lot of people. I realized it was completely broken.”

Like a lot of people in Hollywood, Mayo is connected to that system through her family. Her dad was a top executive at Radio One and her mom worked as a paralegal in entertainment law. But in spite of her access to the top tiers of the industry, Mayo rose in a world with very few people who looked like her.

“I worked with Ava DuVernay on Selma, and that was my first time ever seeing a Black woman in a position of authorship and power,” Mayo said. “It was very clear to me that she was doing something that would be ultimately a tipping point for our industry.”

She was also inspired by the show Atlanta. “Not just because it was Black,” she explained “and not just because, you know, Donald’s brilliant and the storytelling was so good.”

It was, she said, because Atlanta exactly aligned with the sort of movies she most enjoys.

“I said to Donald, I was like, it’s as if you climbed in my head and wrote me. The music is the music that I listen to, the jokes I get in the way that it’s how my friends and I joke… And that’s when I was like, OK, this is now possible and we need to be doing this in film as well.”

Mayo decided to execute the visions of other artists who impressed her, and she set out to convince high level executives to invest as well.

“That’s when I started going into rooms and saying: ‘You all are missing an opportunity here. And financially, you’re leaving money on the table. And also, why wouldn’t we want to be making more of this? This is some of the most exciting art that’s coming out from our industry today.”

She says she wanted to try to be a part of that art, and to “scale it up.”

Mayo’s other projects include an upcoming movie called Women Talking directed and written by Sarah Polley and AMC’s legal drama 61st Street. The first episode was directed by Marta Cunningham.

“Usually we associate executives with these … shark-like mentalities,” Cunningham mused to a reporter at a screening of 61st Street at the National Museum of African American history and culture in Washington, D.C., last spring. “[Mayo] being a Black woman – young, fearless, queer, in the industry. And kind! It’s not about her status, her paycheck, her power. And it’s so refreshing.”

“It’s kind of time for something new,” Mayo reflected during her interview with NPR. What healthy industry, she wondered, stays the same for a hundred years? The trick, she said, is to keep seeking risk and artistic reward:

“If you had the privilege, as I do, to be alive in this moment and in a position where you can either tell stories or partially determine which stories are told, I don’t know how you can’t be excited about what’s being left on the table.”

Alana Mayo is not only making the table bigger. She might even be redefining what the table is.