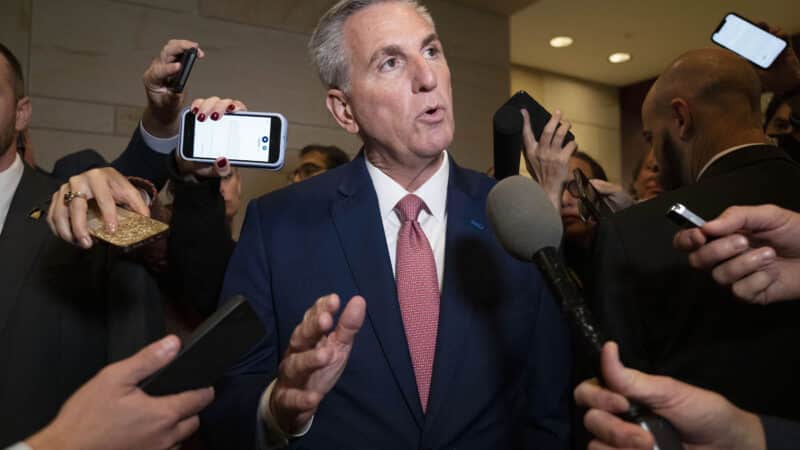 House Minority Leader Kevin McCarthy was nominated by House Republicans to serve as Speaker of the House when the new session of Congress starts in January, even as control of the chamber remains unclear.

The California congressman was nominated by 188 – 31, an aide to McCarthy tells NPR.

With some GOP lawmakers voting for his challenger, Arizona Rep. Andy Biggs, a conservative member of the House Freedom Caucus, McCarthy faces a challenge uniting a fractured conference that is still reeling from disappointing midterm election results.

Tuesday’s closed-door caucus vote was the first step on McCarthy’s path to presiding over the House chamber. The California Republican needs 218 votes to be elected in a public vote on the House floor on January 3. The next seven weeks will be a test of his ability to win over those who called for a major leadership shakeup. After McCarthy and other top House Republicans vowed a red wave in the 2022 midterms some conservatives are demanding operational changes to make the legislative process more transparent.

Control of the House is unclear with several races still uncalled a week after the election. But the GOP is on track to eke out a majority — one in the single digits. Heading into the official vote next year McCarthy can’t afford to lose more than a couple votes. If his opponents mount a challenge on the floor the process could turn messy and be a sign of a tumultuous GOP majority torn between hard liners on the right who refuse to compromise and more mainstream members who believe voters sent them to Washington to show they can govern.

Oklahoma GOP Rep. Tom Cole, an ally of McCarthy’s outlined the case for him to take the gavel, saying he’s proven he can effectively handle the role.

“The guy has added seats every time he’s been our leader,” Cole said. “He’s our best strategist, he’s our best fundraiser, he’s our best candidate recruiter. Isn’t that the guy you want to lead you? I think so.”

Biggs, however, maintains it’s time to shake things up within the caucus and choose a different leader.

“I think the American people want us to change the status quo and I think the members do.”

“This is about empowering the American people through their elected representatives,” he said, adding that it would give House Republicans the “ability to truly fight against the radical Biden-Pelosi agenda,” pointing to conservative priorities like curbing government funding, decreasing migration at the southern border and tackling high gas prices.

Arizona Rep. David Schweikert, a supporter of McCarthy’s, downplayed Biggs’ challenge, calling it ” the dance of politics” and said if it allows members to be heard about their criticisms of process then “it is part of the healing process.”

Previous candidates for speaker like Rep. Paul Ryan and Rep. Nancy Pelosi also faced challenges in their internal party votes, but later prevailed on the floor. Several Republicans predicted that those who wanted to vent or protest the election results would ultimately come around and back McCarthy.