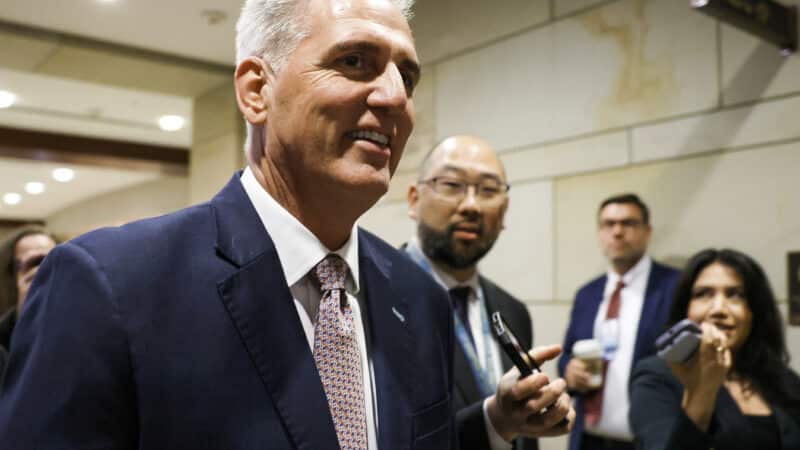 Control of the U.S. House remains in question, but Republicans plan to move ahead Tuesday with leadership elections for the next Congress. Minority Leader Kevin McCarthy, R-Calif., faces an early and critical loyalty test in his bid to be speaker of what is likely to be a single-digit GOP majority.

His success rests on keeping rank-and-file Republicans almost completely unified behind him and already there are signs of trouble, as a handful of right-wing lawmakers say they will not support him for speaker.

“I have spoken with many Republicans in Congress and many who will join our ranks soon. None are actually inspired by Kevin McCarthy,” Rep. Matt Gaetz, R-Fla., said on his podcast last week.

Fellow far-right lawmakers aligned with the Freedom Caucus, like Republican Rep. Andy Biggs of Arizona and Rep. Bob Good of Virginia, have also raised doubts about McCarthy’s grip on power.

“He absolutely should be concerned,” Good told Fox News. “There absolutely will be a challenge to Kevin McCarthy’s leadership bid.”

Tuesday’s leadership election among the House Republican caucus is somewhat symbolic, because the speaker is technically elected on the first day of the new Congress in January and must win a majority of the full House to secure the gavel. However, if McCarthy Tuesday falls far below the likely 218 votes needed on the floor next year, his ability to secure the speakership will be called into question. His challenge is amplified by how narrow the GOP majority is likely to be. There are still outstanding races that could deliver Republicans a few more seats but it will be far from the strong majority the party hoped for.

McCarthy allies say he should not be counted out just yet.

“He’s playing the inside game to win the vote for speaker. He knows exactly how to do that,” former House Speaker Paul Ryan, R-Wis., told the podcast Control, hosted by former House GOP leadership aide Brendan Buck. “He was better at that than me, and I wouldn’t count him out ever because he really knows how members think, how they operate, and how to play a vote counting game.”

McCarthy had a lucky path in to politics

As he likes to tell it, McCarthy’s political career started on a gamble in the California Lottery when he was a young kid living in Bakersfield.

“I scratched off my first ticket, all three. The most money you could win was $5,000. I scratch three of them and all three of them say $5,000. And I had never played the game before so I go back up to the checker and say, ‘You know, as I read this: Did I win?’ I was one of the first winners in California,” McCarthy recalled in a 2005 conversation with high school seniors recorded by C-Span.

That lucky break led him to invest that money, use it to open up a deli named Kevin O’s, and then sell that business to help pay his way through college. There he started working for his then-representative, Republican Bill Thomas, for the next 15 years. In 2002, he ran and won a seat in the California State Assembly where he was immediately elected party leader.

When Thomas announced he would retire in 2006, McCarthy succeeded his former boss in Congress. In his campaigns since, McCarthy only ever faced token opposition for the seat representing his hometown, and he’s never won a general election with less than 62% of the vote.

McCarthy’s rise up the leadership ladder

He entered Congress a traditional small government conservative typical of the George W. Bush era. His first speech on the House floor was in opposition to a 2007 Democratic bill to raise the minimum wage.

“I came to Congress to work to increase opportunities for all Americans,” he said, “not to harm workers and small businesses.”

Often described as sunny and gregarious, with an insider’s savvy and an obsession with tactical politics, McCarthy was quickly dubbed a young “rising star” in the party, along with then-Rep. Eric Cantor of Virginia and Paul Ryan of Wisconsin. Together the trio were the minority party’s self-proclaimed “Young Guns” who wrote a 2010 book, went on a book tour, and produced a glossy Hollywood style ad to promote their agenda, and themselves.

McCarthy also did the work. He’s credited with helping recruit dozens of outsider candidates to run in the historic 2010 tea party wave that delivered a Republican majority and with it made him majority whip, right below Cantor who became majority leader.

With that majority came a more right-wing, confrontational style of Republican lawmaker, and the party’s “Young Guns” were also now part of the party establishment. Cantor was forced out in 2014 when he was defeated in his Republican primary by a candidate who ran to his right. In the aftermath, McCarthy became majority leader.

“They elected a guy who spent a lot of his time going around recruiting many of these individuals to get the majority. Look, I’ve always had to struggle for whatever we wanted to overcome,” he told reporters, when asked if he was conservative enough to lead the conference.

House Republicans — still stymied by a Democrat in the White House — continued to take out their inability to get much of anything done out on their own leadership. Far right conservatives led by then-Rep. Mark Meadows of North Carolina (who later became former President Donald Trump’s last chief of staff) led a months long campaign that ultimately forced Speaker John Boehner, R-Ohio, to resign in the fall of 2015. McCarthy quickly announced a bid to succeed him, but he withdrew from that race shortly after when it became clear he did not have the support of the most conservative wing in the party. “If we are going to unite and be strong, we need a new face to help do that,” he said. The remaining “Young Gun,” Paul Ryan, reluctantly stepped in to the role and McCarthy remained the speaker’s deputy.

Trump’s stunning 2016 presidential victory once again realigned the political interests of Republicans. Tea Party style opposition to spending fell way to loyalty tests to the new leader of the party. While Ryan and Trump were often at odds over tweets and the legislative agenda, McCarthy worked his way in to Trump’s good graces. He once bragged to The Washington Post that after noticing Trump’s favorite Starburst flavors were the red and pink ones, he made a point to deliver a jar of them to the president as a gift.

Trump often called him “My Kevin” in private and publicly backed McCarthy to lead House Republicans after they lost the majority in 2018.

“We have a great man, and he’s going to be hopefully a great speaker of the House,” Trump said.

McCarthy and Trump’s alliance remained strong during Trump’s first impeachment for abuse of power and obstruction of Congress. The day Trump was acquitted by the Senate, McCarthy tweeted out a video of himself tearing up the articles of impeachment cheering: “Acquitted for life!”

After Trump lost the 2020 election to Joe Biden and then fueled the Jan. 6 attack on the Capitol, McCarthy — in the immediate aftermath — appeared ready to sever ties with the president.

“The president bears responsibility for Wednesday’s attack on Congress by mob rioters,” he declared on the House floor. But when it became clear that the party base and most Republican lawmakers remained loyal to Trump, McCarthy pivoted: 22 days after the attack he was photographed with Trump at the former president’s Mar-a-Lago estate for a private meeting to plot winning back the House in 2022.

McCarthy refocused his leadership efforts to to win over Trump loyalists in the House, voted against Trump’s second impeachment for incitement of insurrection and helped oust Wyoming Republican Rep. Liz Cheney from party leadership for her criticism of Trump and his role in inciting the Jan. 6 attack. Cheney has since never missed an opportunity to question McCarthy’s fitness for public office.

While some conservatives are hoping to force a leadership challenge against McCarthy, no one has yet stepped up to challenge him. Trump has also not weighed in on whether or not he continues to support McCarthy in the role. And even if he wins the gavel, leading a fractured Republican Party will present significant challenges over the next two years as the party clashes with the Biden administration ahead of the 2024 presidential election.

“The question is: Can we sort of make the culture war more of a side thing, and make a policy battle the thing and go and engage in a battle of ideas, instead of the assassination and the character assassination that comes with culture war politics?” Ryan told the Control podcast. “I don’t know if our party’s up to that right now, but that to me is where we have to go.”