Jan. 6 panel is back to present evidence in a final investigative hearing 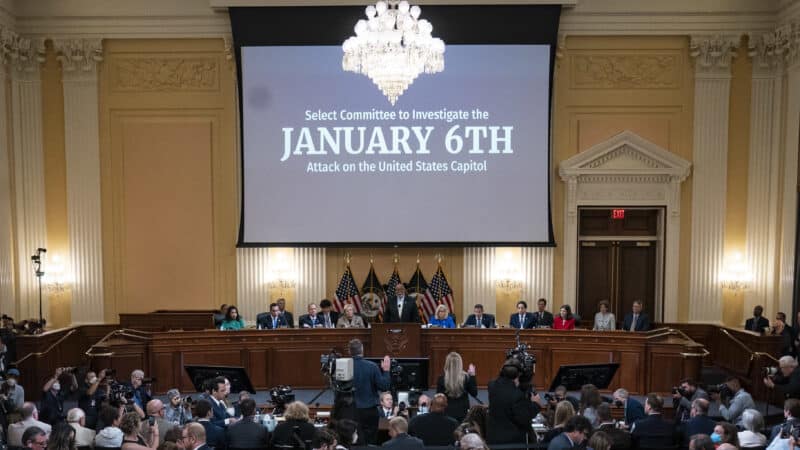 For a livestream of today’s hearing and NPR’s live digital updates, head to our live blog.

The House Select Committee investigating the Jan. 6 attack on the Capitol holds its ninth public hearing Thursday, potentially the final one ahead of the release of its report.

“This one is going to look a little bit different,” a select committee aide said.

The blockbuster Jan. 6 hearings from this past summer each focused on a particular topic as part of the overall effort to overturn the 2020 election results. Thursday’s hearing, instead, will “take a step back” and look at the push to undo President Biden’s win from a broader context.

The hearing could present new testimony that hasn’t been previously shared across a range of topics related to the probe into the deadly siege. That could also include materials recently obtained by the panel from the Secret Service about its role, as well as revisiting former President Donald Trump’s pressure campaign on key officials.

The hearing is expected to last 2 and a half hours, and no live witnesses are expected to appear, the aides said.

“It will revisit a lot of themes that we discussed in June and July, but with new information to shine additional light on our findings,” they said.

While the panel is expected to present testimony from new witnesses in Thursday’s hearing, aides declined to say which witnesses could be featured.

For example, it’s unclear if the committee will share testimony from Ginni Thomas, the wife of Supreme Court Justice Clarence Thomas, who appeared behind closed doors last month.

Where the panel is headed

Committee Chairman Bennie Thompson, D-Miss., has repeatedly stressed that the panel’s charge is to follow the facts, come up with recommendations to protect democracy and issue a report with the committee’s findings. He says the report will be released before the select committee sunsets at the end of this year.

Even rank-and-file Democrats were skeptical the committee’s hearings would break through or reveal substantial new information. But the series of summer public sessions — two in prime time — delivered many dramatic moments with largely Republican witnesses disclosing new details about how then-President Trump was told repeatedly he lost the 2020 election and that the effort to overturn the results or push fraud claims was illegal, but he ignored that advice and pushed to reverse the election’s outcome.

Vice Chair Liz Cheney, R-Wy., has served as the unofficial lead prosecutor for much of the hearings, laying out in the first hearing in June what the panel would demonstrate: “President Trump summoned the mob, assembled the mob and lit the flame of this attack.”

After the weeks of the hearings in June and July, there was some indication that Trump’s position as the leader of his party was damaged. But the Justice Department search of his Florida residence in early August served to rally most congressional Republicans around him and his argument that the expanding federal investigations were politically motivated.

The Jan. 6 panel began teasing additional hearings soon after they wrapped their series of presentations in July. Committee members have repeatedly said that there is still new evidence to share about their findings.

“It’s just things that you haven’t heard before,” Thompson told reporters last month when asked about specific areas that could be covered.

During the previous hearings, Thompson or Cheney often opened or closed the presentations, with a particular committee member leading the topic discussion. This time, each panel member will play an equal role, Thompson and others have said.

However, members have been more coy about what ground they’ll cover or witnesses who may or may not appear.

This summer, the panel dug into the role of the Secret Service in the Jan. 6 attack, while also learning new details about the agency’s deleted text messages surrounding the period of the siege. After discovering the Department of Homeland Security watchdog knew about the missing texts months earlier, the panel issued a subpoena to the Secret Service to obtain additional records.

As a result, Cheney said during the Texas Tribune Festival last month that the panel had obtained 800,000 pages of material from the Secret Service.

“We’ve received a tremendous amount of information,” she said.

Some of Pence’s closest aides and advisors have appeared before the panel, but Pence has declined to testify directly himself.

“There’s new information that we’ve received since our hearings that is helpful to our investigation and we look forward to sharing what’s appropriate,” Aguilar told NPR.

With a final report is expected by year end, the panel could hold an additional hearing or hearings to announce those findings.