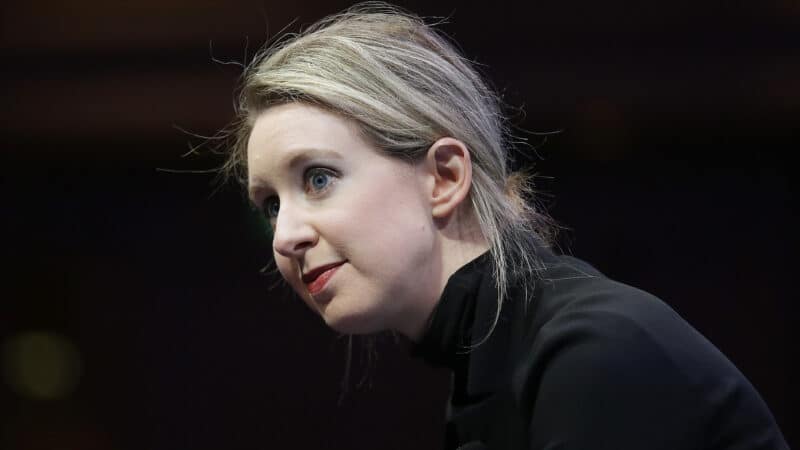 SAN JOSE, Calif – Former Silicon Valley star Elizabeth Holmes is heading to a federal courthouse here on Friday to beg for leniency during her sentencing hearing, likely the final chapter in the years-long saga of Theranos, the blood-testing startup she founded. Prosecutors are expected to argue that she deserves 15 years in prison.

Judgment day for Holmes follows a jury convicting her on fours counts of defrauding investors out of hundreds of millions of dollars with false and misleading claims about what her supposedly breakthrough technology could do with just a few drops of blood. Behind the scenes, it turned out, she was relying on traditional lab testing machines.

In 2014, Theranos was estimated to be worth $9 billion, more than the value of Uber and Spotify at the time. Not long after, the company began to unravel.

The story of Holmes, an eccentric tech leader who once drew comparisons to Steve Jobs and inspired fawning attention in the media, is one of the most dramatic downfalls of a business leader in recent history.

Federal prosecutors called Holmes’ crimes in court papers ahead of the hearing “among the most substantial white-collar offenses Silicon Valley, or any other district, has seen,” but defense lawyers for Holmes counter that she has shown remorse and that she is being punished for nothing more than a startup failure.

Defense lawyers are asking that Holmes stay out of prison and instead serve time in home confinement. But Holmes’ legal team also said in court papers that if incarceration is deemed necessary, she should not spend any longer than 18 months. That’s in sharp contrast to the 15 years prosecutors are pushing for, just shy of the maximum prison time she could face of 20 years under federal guidelines.

The decision rests solely with U.S. District Judge Ed Davila, who presided over Holmes’ trial, and the separate trial of Theranos’ No. 2 executive, Ramesh “Sunny” Balwani, who was also convicted of fraud and is scheduled to be sentenced next month.

Back in January, the jury in Holmes’ case returned a mixed verdict: Jurors acquitted her of fraud related to Theranos patients who were harmed, but they convicted her of counts linked to investors who were hoodwinked.

Prosecutors, however, have argued that the patients who received incorrect blood test results because of the company’s faulty technology represent facts that should be considered “relevant conduct for sentencing purposes,” meaning the patients could still play into Davila’s sentence.

Letters from her partner, a tech investor and a senator ask for mercy

Holmes’ legal team submitted 130 letters to the judge from friends, family and other supporters, including New Jersey Sen. Cory Booker, who is a longtime friend of Holmes. In his letter, Booker wrote, “Each of us is more than the worst thing we’ve done,” citing Bryan Stevenson, the criminal justice reform advocate and lawyer.

Billy Evans, Holmes’ partner, wrote the judge asking for mercy and described the impact the case has had on their family. The submission includes photos of the the couple with their 1-year-old son and their dog, Balto, which the family says was killed by mountain lions. Evans wrote that Holmes has already paid mightily for enduring the notoriety that followed Theranos crumbling under pressure.

“If you are to know Liz, it is to know that she is honest, humble, selfless, and kind beyond what most people have ever experienced,” Evans wrote. “Please let her be free.”

Holmes, who is 38 years old, was visibly pregnant with her second child at her last court appearance. If Davila hands down a prison sentence, her pregnancy could influence when her confinement starts.

Her lawyers also point out that she has been volunteering as a sexual assault victim counselor. Holmes is herself a survivor of sexual assault, which she spoke about when she took the stand in emotional testimony that stretched on for days at trial.

Holmes’ defense team has argued that the media scrutiny and legal proceedings connected to the collapse of Theranos is punishment enough, a point her lawyers hammer home to the judge by quoting a letter sent to the court from tech investor David Sokol.

“She poses no danger to anyone. She openly acknowledges her business mistakes and she did not benefit in any material way notwithstanding the opportunity to do so,” Sokol wrote. “Her suffering, including among other things extreme public ignominy, financial bankruptcy and the terrifying prospect of incarceration while the mother of a new baby, provides more than ample deterrence to others.”

In their memo to the judge, prosecutors point out that in fraud cases, the amount of lost money is weighed more heavily than any other factor when it comes to sentencing according to federal guidelines.

Theranos raised nearly $1 billion from people including medial mogul Rupert Murdoch and Oracle chief executive Larry Ellison before the company’s implosion. The amount of Holmes’ fraud is not even fully captured in the highest level of loss in the guidelines, which caps out at more than $550 million. In other words, the sheer dollar amount of money defrauded in the case, prosecutors argue, leaves no other choice but to send Holmes away for more than a decade behind bars.

Prosecutors highlight a further reason they are pushing to have Holmes locked up: to send a signal to Silicon Valley.

“A significant custodial sentence will serve not only to deter future startup fraud schemes,” prosecutors wrote. “But it will also serve to rebuild the trust investors must have when funding innovation.”

A one-time star of Silicon Valley is sentenced today in federal court. Back in January, a jury convicted Elizabeth Holmes of defrauding investors of hundreds of millions of dollars. She was chief executive of a blood testing company called Theranos. Now she faces substantial prison time. NPR tech reporter Bobby Allyn has been covering this story. Bobby, good morning.

INSKEEP: What was the fraud?

ALLYN: Holmes claimed to have revolutionized laboratory science, in particular the way people get blood tested. The problem was that many of Holmes’ core claims about her company’s technology were either grossly exaggerated or just purely made up. She claimed that her machines could run a thousand different blood tests when, in fact, only about a dozen actually worked. She forged letters from big pharma companies praising the technology to drum up attention and to bring in more investment dollars. She stretched the truth about the use of Theranos technology by the U.S. military. Eventually, Theranos – which we will note here, was once valued at $9 billion, eventually valued at zero. Eventually, it collapsed in scandal when journalists and federal investigators, you know, exposed the truth about the company.

INSKEEP: Entirely aside from the money, this was something that people were depending on for their health.

ALLYN: Yeah, that’s right. So witnesses took the stand who got these blood tests at Walgreens. There was a witness who was a cancer patient who took a blood test that falsely said her cancer came back. There was a pregnant woman who took a blood test and got a result that showed something not to be true about her pregnancy, which was very troubling. But it’s important to note that the jury at trial found her guilty only of the investor counts, that, you know, after deliberating for a long time, they thought it’s hard to draw a direct line between Elizabeth Holmes and the patients who were harmed. So she was actually only convicted of ripping investors off, not harming patients.

INSKEEP: OK. So how much prison time is she facing then for the loss of money?

ALLYN: Well, federal prosecutors have argued in their court papers that she deserves 15 years in prison and that she should pay $800 million in restitution to investors and companies that she ripped off. Now, of course, defense lawyers for Holmes say she deserves just home confinement. But if the judge deems prison necessary, that they should give her no more than 18 months behind bars. Now, Holmes submitted some 130 letters to the judge from friends and family, including from Senator Cory Booker, who is a longtime friend of Holmes. In his letter, Booker cited the activist lawyer Bryan Stevenson, quote, that “each of us is more than the worst thing that we’ve done.”

Now, Holmes is 38 years old. She is currently pregnant with her second child, something the judge may consider. The lawyers also point out that she’s been volunteering as a sexual assault victim counselor. But prosecutors say she’s committed one of the most serious white-collar crimes in Silicon Valley history and that she should spend time behind bars, both as punishment for her deeds and also to send a signal to the tech sector.

INSKEEP: I’m interested if anybody did receive a message, given that this story is several years old, and this is certainly not the last scandal there’s ever been in Silicon Valley.

ALLYN: I think it has had some effect. For example, I was once talking to a biotech founder in San Francisco who told me about a so-called Theranos clause his investors required and paperwork basically affirming that all of the lab tests his startup were doing were really, truly accurate. But zooming out and taking the big picture, I think most in Silicon Valley see Elizabeth Holmes and see Thernos as an anomaly, as sort of a one-off and not indicative of how the industry operates. Now, there are many critics of the industry who say that is certainly up for debate.

INSKEEP: NPR’s Bobby Allyn, always a pleasure talking with you.