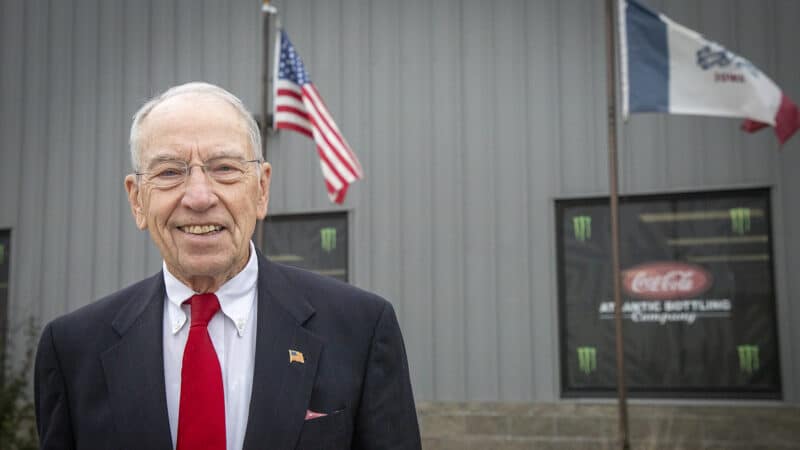 Voters in Iowa have already begun filling out their ballots in the 2022 midterm elections. One of the choices they will make this year is whether to send Republican Chuck Grassley back for an eighth term in the U.S. Senate. National Democrats have mostly given up on Iowa, which was long seen as a competitive between the two major political parties. Grassley, though, is running in the closest race he has had since his first election to the Senate in 1980.

“This is my 99th county meeting I’ve had for the 42 year in a row,” Grassley said to a round of applause from a friendly mid-day crowd in the rural southwest Iowa town of Bedford in late August.

Sen. Grassley likes to tout his annual tours of Iowa’s 99 counties, which are a mix of public and private events that some say are hard for his critics to attend. Grassley has been re-elected for decades to represent this state that many have long seen as purple.

“As things have gotten more polarized, so have people and so you should expect a lot of states that were purple to start to shift one direction,” explained political science professor Megan Goldberg at Cornell College in Mount Vernon, Iowa. “[Iowa] has the demographics that like to push us in the rightward direction, not the leftward.”

Like so many places in the country, the Supreme Court’s decision to overturn Roe v. Wade energized supporters of reproductive rights in Iowa. Democrats see Sen. Grassley’s role on the Senate Judiciary Committee as a key player in that eventual ruling. Grassley blocked former President Obama’s Supreme Court nominee Merrick Garland ahead of the 2016 presidential election and then shuttled former President Trump’s nominee of now-Justice Amy Coney Barrett through nomination hearings ahead of the 2020 presidential election.

A handful of protesters turn out almost every Friday in the small northeastern Iowa town of McGregor holding signs that say things like “Abortion is Healthcare” and “Women: Vote Like Your Life Depends on it… Because it Does.”

“We’re barreling towards 2024, which really seems like the last chance we have to stay a democracy,” protester Erin Cubbon said. “It’s scary.”

Cubbon says it’s hard to believe Iowa helped launch former Obama’s rise to the White House and was among the first to legalize same-sex marriage. It’s also the same state Sen. Grassley has been representing in Congress for nearly a half-century.

He has been reelected easily partly because he presents himself as a moderate. But the 89-year-old has learned to embrace Trump like Republican voters have in the state. Grassley accepted his endorsement at a Trump rally in Des Moines last year.

“I was born at night but not last night so if I didn’t accept the endorsement of a person that’s got 91% of Republican voters in Iowa,” Grassley joked to thousands of cheering Trump supporters on the Iowa State Fairgrounds “I wouldn’t be that smart.”

NPR asked Grassley recently why he pivots to talk about election policy instead of pushing back on Trump’s false claim about a stolen election.

“I shouldn’t have to repeat that. It’s a fact that what I said on [December] the 14th, when the electoral votes were counted.”

It’s clear Grassley is an institution in Iowa but a new Des Moines Register Iowa poll suggests voters might be ready to move on even as this state becomes redder. Grassley is just three points ahead of his Democratic challenger, retired Navy Admiral Mike Franken.

Franken is hoping to catapult that public opinion advantage in a reddening state into the U.S. Senate. HE recognizes, though, it is an uphill climb.

“There’s a portion of Iowa that will not vote for me because I’m a Democrat, that will not change. I will hold office and I will support them to the best of my ability,” Franken said. “That’s completely different than the Republican perspective on this state, where it is support your own and to hell with the rest.”

Many had written Franken’s campaign off after a police report surfaced saying he kissed a former staffer without consent. National Democrats are not engaged in Iowa either. Grassley has the cash advantage but Franken raised twice as much money as Grassley in the last fundraising quarter. Franken is also hammering Grassley on abortion, hoping that will drive Iowans to the polls.

Megan Goldberg at Cornell College says Franken may have a very narrow path to victory.

“Where Republicans go in and they vote for Republicans, for governor, for the House of Representatives and they skip voting in the Senate race, because they’re not interested in voting for Grassley,” Goldberg said. “But they can’t bring themselves to vote for a Democrat.”

Expect Franken to highlight Grassley’s extensive tenure in Washington in the last days on the campaign trail as he attempts the seemingly impossible task of unseating a titan of Iowa politics.