The U.K. prime minister fires her finance chief and changes course on taxes 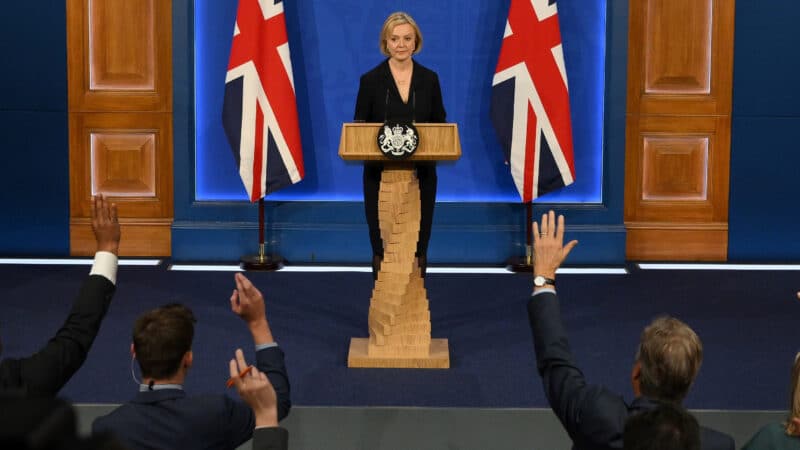 The government said former Health Secretary Jeremy Hunt is taking over as chancellor of the Exchequer, the United Kingdom’s treasury. He is the fourth chancellor this year.

Shortly after sacking the finance minister, Truss held a news conference at Downing Street, and appeared visibly nervous, saying, “We need to act now to reassure the markets of our fiscal discipline.”

She announced she was canceling a proposed corporation tax cut, a central part of the new government’s economic plan that created turmoil in British politics and financial markets and sent the pound plunging late last month.

Truss’ course correction comes as her administration has sustained mounting criticism from opposition politicians and legislators within her own party, as well as international economists and investors who have continued to divest themselves of British assets.

Kwarteng had to depart early from Washington, D.C., Thursday evening, where he had been meeting with counterparts at the International Monetary Fund. He and Truss held urgent talks in Downing Street shortly after his return to London.

“When you asked me to serve as your Chancellor, I did so in full knowledge that the situation we faced was incredibly difficult, with rising global interest rates and energy prices,” Kwarteng said in his departure letter. “However, your vision of optimism, growth and change was right.”

Prior to her public speech, Truss’ office and her supporters had repeatedly said she would not change her broader approach to kick-starting economic growth, and that she and Kwarteng would continue to work together toward a common goal.

Truss took over from former Prime Minister Boris Johnson in early September. Within days, then-finance minister Kwarteng had proposed a series of tax cuts and spending measures, without saying how they would be funded.

The proposal led the pound to weaken to a record low against the dollar. Millions of homeowners faced steep increases to their mortgage rates and government borrowing costs skyrocketed. That prompted the Bank of England to step in to prevent a crisis.

Earlier this month, the government backtracked on another part of its controversial economic package, by scrapping proposed tax cuts for higher earners.

As confidence and anticipation have grown for further changes, the pound inched up in value on Thursday and bond markets stabilized some. And in the minutes that followed Truss’ speech Friday, the currency rallied significantly — often a sign of increased investor confidence in a country’s economic future.

Thérèse Coffey, the deputy prime minister and health secretary, who is one of Truss’ longest-standing allies in Parliament, tweeted her support for Friday’s decisions. She wrote that Truss was “right to act now to ensure our country’s economic stability,” particularly given the deteriorating economic picture worldwide, which she attributed to Russia’s invasion of Ukraine.

Meanwhile, veteran Conservative lawmaker Roger Gale said it was hard to understand why Truss had forced out Kwarteng. He wrote on Twitter that the former finance chief was a “good man” who had simply been “promoting the policies upon which she [Truss] was elected” as Conservative leader by the party’s grassroots members.

Gale did, though, describe the new chancellor, Hunt, as “an experienced pair of hands on the financial tiller.”