Russia says it’s withdrawing from the key city of Kherson, but Ukraine is skeptical 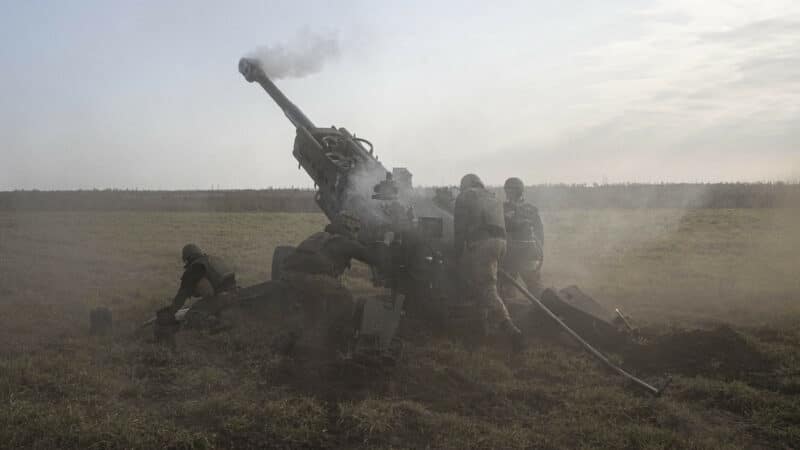 DNIPRO, Ukraine, and MOSCOW — Russia announced a troop withdrawal from the key Ukrainian city of Kherson on Wednesday, in what would be a major blow to President Vladimir Putin’s war effort. But the government in Kyiv was skeptical of the move.

Russian Defense Minister Sergei Shoigu said Wednesday he ordered troops to retreat from Kherson to the eastern bank of the Dnipro River on the recommendation of the commander of Russia’s forces in Ukraine, Gen. Sergei Surovikin.

“The decision to defend on the left bank of the Dnipro is not easy, but at the same time we will save the lives of our military personnel and the combat capability of our forces,” Surovikin said in televised remarks as he presented a report on the Russian military campaign to Shoigu.

The announcement drew skepticism from Ukraine’s government, which has previously suggested Russia could pretend to pull out of Kherson to lure Ukrainian forces into battle.

Later in the day, President Biden told reporters that Moscow’s withdrawal order was “evidence of the fact that they have some real problems with the Russian military.”

Ukrainian forces have been steadily advancing on the city. Kherson was the only regional capital seized by Russian forces after the February invasion. At the time, the Kremlin insisted Russia was in Kherson “forever.”

The loss of Kherson follows a string of other military defeats and retreats by Russia in eastern Ukraine. The city is the capital of the Kherson region, one of four Ukrainian territories that Moscow officially claimed to have annexed and incorporated into the Russian Federation on Sept. 30.

Military analysts and Ukrainian intelligence officials have been warning that a battle for Kherson city would devolve into bloody urban warfare if Russia decided to try to defend the port at the base of the Dnipro River.

For weeks, Moscow-installed administrators in Kherson have repeatedly called on people to evacuate the city to the east bank of the Dnipro, saying a major Ukrainian assault was imminent. The evacuations moved civilians deeper into Russian-controlled territory. Some were bused to Crimea. Others were offered resettlement in the interior of Russia. There were reports of Russian troops looting offices and shops as they retreated.

Ukrainian forces had systematically blown up key bridges in and around Kherson, cutting off potential escape routes for Russian troops.

The war in Ukraine took another turn today. From the Ukrainian perspective, a good turn. Russia announced that it will withdraw its troops from Kherson, a key city in southern Ukraine. Joining us now are NPR’s Jason Beaubien, who is in Dnipro in southern Ukraine, and NPR’s Charles Maynes, who joins us from Moscow. Welcome to both of you.

CHANG: So, Charles, I want to start with you. Who exactly on the Russian side made this decision to withdraw? I mean, do we know?

MAYNES: Yeah. You know, we learned of this through what looked like a rather staged video on state television in which the defense minister, Sergei Shoigu, called on the commander of his forces in Ukraine – this is General Sergey Surovikin – to fill in the top brass on how things were going. Surovikin started off on a positive note, saying that Russia’s military campaign had stabilized after recent setbacks. But then Shoigu asked about Kherson, this city where Ukrainian forces have been closing in for weeks. And Surovikin’s response was that Russian troops should pull back to the eastern bank of the Dnipro River that borders the city; in other words, retreat.

MAYNES: So here, Surovikin says he understands this is not an easy decision but one that was necessary to save the lives of military personnel, as well as the combat capability of Russia’s forces going forward. Shoigu agreed and gave the order.

CHANG: Well, Jason, I mean, we’ve been hearing about this battle for Kherson for months now, right? Like, does this mean that the Ukrainians definitively have this city?

BEAUBIEN: No. There’s still the potential for a major battle here. Russia is simply saying, as Charles just mentioned, that it’s going to pull back to the east side of the river. But this has been, and it continues to be, an artillery war. So from the east bank, Russian artillery will still be able to pound Kherson if and when Ukrainian troops try to move into it. What this withdrawal does do is it gives the Russians an escape route. It had been starting to look like the Russian forces could be backed up against the river. Ukraine had destroyed the lone bridge out of Kherson to the east. So Russia faced this potential scenario where they’d have a lot of troops in Kherson. They could be easily surrounded with nowhere to go. And this withdrawal to the east bank avoids that.

CHANG: OK. Well, can we just step back a little bit and talk about Kherson? Because, like, why would Ukraine potentially recapturing the city be significant if it were to happen?

BEAUBIEN: You know, this is the only regional capital that Russia has seized in this military campaign this year. Russian troops actually put up the Russian flag in Kherson on February 25, one day after the invasion started. So losing Kherson, it’s a huge embarrassment for Moscow. I mean, I’ll remind you that this is the capital of one of the regions that President Putin just in September announced he was annexing to the Russian Federation forever. And if Ukraine does take back Kherson city, it comes on the heels of some other significant victories by Ukrainian troops, particularly rapid counter-offensives that took huge swathes of the Kharkiv region in the east.

CHANG: Well, meanwhile, Charles, I’m just curious, how has this news been received in Moscow? Like, what does this mean for the Russian war effort?

MAYNES: Well, you know, there were signs the Kremlin knew this was coming. For example, that flag Jason mentioned was taken down last week. It disappeared from the Kherson administrative building. Meanwhile, there have been reports that state media had been instructed on how to explain the withdrawal to Russians, as basically an operation to save lives. But, of course, some see this as a disaster. You know, for weeks, the Russian-backed proxy government has been insisting that Russia would never abandon the city. And even now, there are those who are holding out hope that this is some kind of sleight of hand – you know, a clever plan by this General Surovikin, which, in fact, the authorities in Kyiv say it may well be.

And in that sense, you know, it’s interesting to see reaction of increasingly high-profile voices inside Russia, like Yevgeny Prigozhin. He sometimes known as Putin’s chef. Prigozhin controls a group of mercenaries that operate in Ukraine, and he’s been very critical of the defense ministry before Surovikin took over as commander. And yet even as Surovikin called for this pullback, Prigozhin praised the general for making the politically unpopular decision but with an eye towards fighting another day.

CHANG: So I guess it’s worth reminding everyone this war is far from over, despite today’s announcement, right, Jason?

BEAUBIEN: Yeah, absolutely. You know, we can expect that Russia is going to dig in on the east bank of the river. There’s already signs that they’re doing that. And I should point out that some of the most intense fighting in the war right now, you know, not to downplay what’s happening around Kherson because it’s significant in the South, but some of the most brutal battles are happening right now in the east around Donetsk. And there’s no sign of that easing up.

CHANG: That is NPR’s Jason Beaubien and Charles Maynes. Thank you to both of you.

MAYNES: Good to be with you.