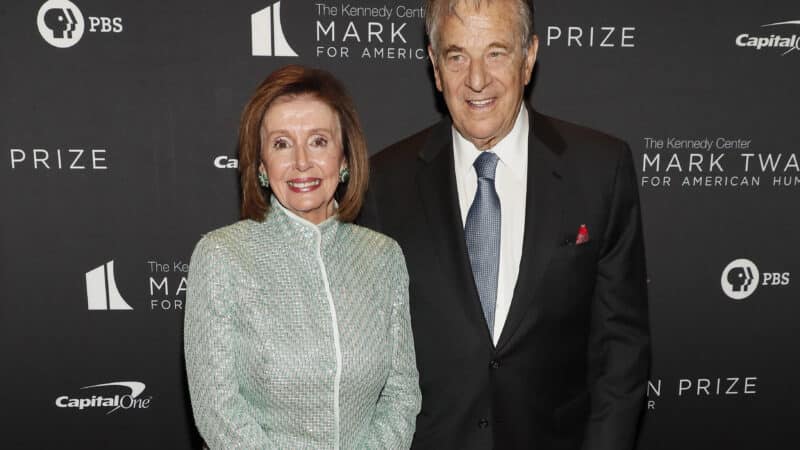 An intruder broke into the Pelosis’ San Francisco home early Friday morning and “violently assaulted” her husband, who was taken to a local hospital to undergo surgery for a skull fracture. The assailant “acted with force, and threatened his life while demanding to see the Speaker,” read a statement from Drew Hammill, Speaker Pelosi’s spokesman.

According to the statement, Paul Pelosi was admitted to Zuckerberg San Francisco General Hospital where he underwent “successful surgery to repair a skull fracture and serious injuries to his right arm and hands. His doctors expect a full recovery.”

Scott, the San Francisco Police chief, praised dispatcher Heather Grimes for her “intuition” and “quick-thinking” after receiving a call from Paul Pelosi himself. Scott did not provide details on how Pelosi signaled that he felt he was in danger, but said Grimes was able to sense something was wrong.

“Based on her experience and intuition, she basically figured out that there was something more to this incident than what she was being told,” Scott told reporters Friday night. “Her actions, in my opinion, resulted in both a higher-priority dispatch and a faster police response.”

Officers arrived at the Pelosi residence at 2:27 a.m. Scott said they knocked on the door and the door was opened by “someone inside.” Officers saw Mr. Pelosi and an adult male, who police have identified as 42-year-old David Depape, “both holding a hammer.”

The suspect, who broke into the home using a rear door “pulled the hammer away from Mr. Pelosi and violently assaulted him with it.”

“Our officers immediately tackled the suspect, disarmed him, took him into custody, requested emergency backup, and rendered medical aid,” Scott said, adding both Depape and Pelosi were transported to a local hospital for treatment.

Although the investigation is ongoing and police have not yet released a motive for the attack, Scott stressed this was not a random act of violence.

“This was intentional,” he said.

A source briefed on the attack told NPR the assailant was searching for Speaker Pelosi, and confronted her husband, shouting, “Where is Nancy, where is Nancy?”

Speaker Pelosi, who is second in line to the presidency after the vice president, was not at home at the time of the break-in and attack.

As of Friday night, Depape remains in the hospital. Scott did not provide any details on his medical information.

President Biden called on politicians Friday evening to “clearly and unambiguously” reject political violence in wake of the attack.

The president, who called Pelosi to offer his support Friday morning, said the attack is “despicable,” while speaking to a Pennsylvania Democratic Party event in Philadelphia.

“There’s no place in America – there’s too much violence, political violence — too much hatred, too much vitriol,” Biden said.

NPR has reviewed social media accounts from someone with the same name as Depape. They include antisemitic tropes and also false claims about the 2020 election and the COVID vaccine. Law enforcement has not provided official information about any specific comments relating to Pelosi.

The break-in at Pelosi’s residence raises serious questions about the security of the home of one of the most powerful lawmakers in the country.

The U.S. Capitol Police is assisting the FBI and the San Francisco Police with a joint investigation into the break-in.

“Special agents with the USCP’s California Field Office quickly arrived on scene, while a team of investigators from the Department’s Threat Assessment Section was simultaneously dispatched from the East Coast to assist the FBI and the San Francisco Police with a joint investigation,” a statement from the Capitol Police read.

The shouts of “Where is Nancy?” from the assailant on Friday echo chants from the rioters who attacked the U.S. Capitol on Jan. 6, 2021.

“Where are you Nancy, we’re looking for you,” shouted rioters that day. Pelosi and other congressional leaders were taken to a secure location during the attack.

Members of Congress have received more funds and resources to secure their homes but some have pressed for more protection given the rise in threats.

According to the U.S. Capitol Police, the number of cases involving concerning statements and threats against lawmakers more than doubled from 2017 to 2021. The force’s threat assessment team opened 9,625 cases in 2021.

This summer, a man carrying a pistol outside the home of Democratic Rep. Pramila Jayapal, chair of the Congressional Progressive Caucus, was arrested.

Rep. Lee Zeldin, R-N.Y., was attacked by a man at a campaign event in July during his gubernatorial race. The attacker tried to stab the congressman, but Zeldin was not seriously injured.

Rep. Adam Kinzinger, R-Ill., an outspoken critic of former President Donald Trump, shared voicemails left at his Capitol Hill office over the summer that threatened him and his family.

“We know where your family is and we’re going to get you,” said one caller.

In April, an Alaskan man was sentenced to 32 months in prison after leaving threatening voicemails to both Republican senators from Alaska, Lisa Murkowski and Dan Sullivan.

In December, a New Hampshire man was sentenced to 33 months in prison for threatening to hang members of Congress who didn’t support Trump.

Lawmakers react to the assault

Lawmakers on both sides of the aisle swiftly condemned the attack and offered their support to the Pelosi family.

Senate Minority Leader Mitch McConnell, R-Ky., tweeted that he was “horrified and disgusted” by the attack and is “grateful to hear that Paul is on track to make a full recovery.”

In a statement, Senate Majority Leader Chuck Schumer, D-N.Y., called the attack a “dastardly act” and said he spoke with Speaker Pelosi Friday morning to extend his “deepest concern and heartfelt wishes.”

GOP Minority Whip Steve Scalise, R-La., reacted to the attack, writing he is “disgusted to hear about the horrific assault on Speaker Pelosi’s husband Paul,” adding: “Let’s be clear: violence has no place in this country.”

Scalise has personally dealt with political violence. In 2017, he was shot by a gunman targeting a congressional baseball practice. Scalise remained in critical condition for days and had to undergo several surgeries to recover.

Former Vice President Mike Pence added his outrage over the attack on Twitter. “There can be no tolerance for violence against public officials or their families,” he wrote. “This man should be prosecuted to the fullest extent of the law.”

Pence himself was the target of the violent attack on Jan. 6, when the mob chanted “Hang Mike Pence,” after it became clear that Pence, who presided over the counting of electoral ballots, would not overturn the election results.

In recent footage released by the House select committee investigating the Jan. 6 attack, Pelosi can be seen speaking to Pence on the phone and expressing concerns over his safety at the Capitol.

“Don’t let anybody know where you are,” she said.