From science fiction to reality, ‘no kill’ meat may be coming soon 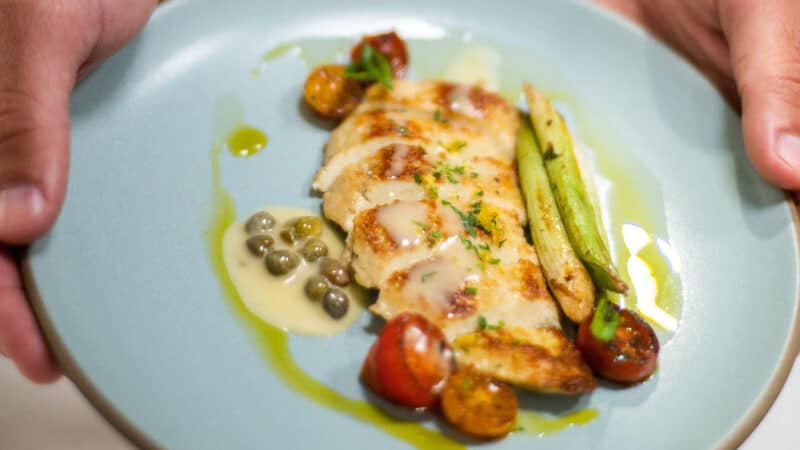 Imagine a way to produce meat without slaughtering animals. Instead of raising livestock on farms, Uma Valeti, a cardiologist, and co-founder of Upside Foods, dreamt of a way to “grow” meat in a production facility, by culturing animal cells.

The concept for what’s now called “cultivated” meat came to Valeti when he was working with heart attack patients at the Mayo Clinic more than 15 years ago, growing human heart cells in a lab. It should be possible to grow meat with similar science, he realized.

Scientists could extract cells from an animal via a needle biopsy, place them in tanks, feed them the nutrients they need to proliferate, including fats, sugar, amino acids and vitamins, and end up with meat.

It has taken years of experimentation by a crew of biologists, biochemists and engineers to turn that concept into a product ready to eat. Now the company is awaiting a greenlight from the Food and Drug Administration to begin selling its first cultivated meat products, including a chicken fillet.

After four years of talks with regulators at the FDA, Valeti anticipates this could happen “in the very near future.” When it does, Upside’s production facility in Emeryville, Calif., will be able to produce over 50,000 pounds of cultivated meat products per year.

“People said it was science fiction,” Valeti told me as we toured the 70,000-square-foot facility. “This is real.”

We suited up for the tour in gowns, goggles and hair nets to maintain food safety protocols and walked past shiny, brewery-style, stainless steel tanks reaching from floor to ceiling.

But these tanks – called cultivators in this industry – “brew” meat, not beer. We saw the cell bank where the animal cell samples are stored, the pipes that pump nutrients into the tanks, and finally the raw meat as it emerged from the production facility.

The process had a futuristic vibe but by the end of the tour, it felt somehow ordinary to me — like a kind of hydroponic gardening.

The facility’s glass walls look out into a busy upscale neighborhood, filled with restaurants, apartments and offices. Valeti says the glass walls are intentional – to signal transparency. “To create a paradigm change, people should be able to walk through and see and believe it,” he says.

Upside Foods could have lots of competition once cultivated meats enter the market. More than 80 companies are staking a future in the space. For instance, Good Meat, part of Eat Just, Inc., will serve its cultivated chicken at the COP-27 climate conference this week, after debuting its product in Singapore. Also, Sci-Fi Foods, founded by self-proclaimed “burger-obsessed food lovers” aims to blend cultivated beef with a plant-based recipe to produce a hybrid burger that, they say, will be better for the planet.

The acceleration in investment comes as more consumers connect the dots between what they eat and the environment. An estimated one third of all human-induced greenhouse gas emissions come from food production and scientists warn it’s nearly impossible to meet climate goals without changing agriculture.

Scientists say beef has an especially large environmental impact because it requires a lot of land to graze animals and is a leading source of methane emissions. By comparison, it takes much less land and grain to raise chickens. However, concentrated poultry operations are linked to water pollution.

Furthermore, concentrated animal feeding operations are a risk factor for the emergence of diseases that spread between animals and people, as a UN report from 2020, Preventing the Next Pandemic, warned.

A move from medicine to meat

Valeti’s leap from cardiology to food innovation was inspired by a belief that there was a better way to bring meat to the table.

He recalls working in a campus dining hall in medical school. He was sent to a slaughterhouse where he saw hundreds of chickens hanging on a production line. “They were literally moving past at blazing speed, they’d be upside down with blood everywhere,” Valeti recalls. “That was an image that just stayed in my head.”

He became a vegetarian, but he knew many people are resolute carnivores. Despite calls from climate change scientists to eat less meat, the globe is demanding more of it. Americans now eat more than 220 pounds of meat per person, per year, compared to 193 pounds a year in the early 1980s.

After his aha moment in the cardiology lab, Valeti became convinced he could develop a viable technique for cultivating meat from animal cells. “Once I got that idea into my head it was nearly impossible to get out,” Valeti recalls.

He began raising money and started Upside (formerly called Memphis Meats) in 2015. At the time his two children were young, and his wife, also a doctor, was supportive of the decision despite the risks involved in a start-up.

He’s won over plenty of investors along the way, including Bill Gates and venture capitalist John Doerr, and the company is now valued at more than a billion dollars. Some of the largest companies involved in traditional meat production, including Tyson and Cargill have also invested.

Though the idea of meat grown in tanks elicits an “ick” response from many people, the emerging industry sees market potential. According to consumer research, 88% of Gen Z consumers in the U.S. say they’d be somewhat open to trying cultivated meat, compared with about 72% of baby boomers.

“We feel super bullish on the prospects for plant-based meat as well as cultivated meat,” says Bruce Friedrich of the Good Food Institute which tracks investment trends and lobbies for alternative proteins.

Climate conscious consumers would be likely early adopters, Friedrich says, but for the market to really take off the products need to taste great and be cost competitive, he says. “Until they get there, they’re going to stay niche,” Friedrich predicts. “Price and taste are why people make their food decisions.”

When I asked Valeti about price parity with conventional meat he said the goal is to be price-competitive. “It will take time to build,” Valeti acknowledged. As for taste, he says his team is ready to wow consumers.

A visit to the test kitchen

During our visit, we stopped in the company’s state-of-the-art test kitchen for taste of Upside Foods’ chicken. I was asked to sign a waiver before tasting it, because it’s not yet legal to sell cell-cultured meat in the U.S.

I was served a piece of their chicken, pan-fried in a white wine butter sauce. My first reaction: “It’s delicious.” (Isn’t everything in wine-butter sauce?) And the texture was chewy, closely replicating the texture of chicken breast (minus bones, and tough bits or grizzle.) “It tastes like chicken,” I said, to which Valeti quickly replied, “It is chicken!”

It took Valeti and his team years to develop the technology behind these tasty bites. A key challenge was creating the feed for the cells. Cells need a mix of proteins, carbohydrates and fats (just as animals do) but, designing the exact formulation was part alchemy, and a lot of trial and error.

The feed needed to maximize growth, but also produce a good taste, texture and nutritional value. He quickly realized no single scientist had the skills to figure this out alone.

A muscle biologist can focus on growth, but he brought in nutritional biochemists and engineers to tackle the competing challenges linked to taste and growth. “We had to develop a multidisciplinary team of scientists,” Valeti says.

Federal agencies are currently considering whether to allow cultivated meat producers to sell their meats.

The FDA and the U.S. Department of Agriculture are working together on a regulatory framework “to help move these innovative products along into the U.S. market, as long as we’re making sure that everything can be done safely and with appropriate labeling,” Susan Mayne, Director of the Center for Food Safety and Applied Nutrition at the FDA told NPR.

The FDA says it will review each company’s submission separately and can’t predict when or if any will be completed. “We encourage firms to have these conversations with us often and early in their product development phase,” an FDA spokesperson wrote in an email.

A recent executive order from the Biden administration, which calls for advancing innovative solutions in climate change and food security, including “cultivating alternative food sources,” was viewed by many in the nascent cultivated food industry as a sign of increased momentum toward approval. The USDA is currently developing labeling requirements.

Debates over health and environmental impact

There are debates about whether cultivated meat is healthy — or potentially healthier than conventional meat. “It’s a very nuanced question without a very simple answer,” explains Dana Hunnes, a registered dietitian at UCLA Medical Center. Opinions tend to reflect the range of views about meat in general.

Hunnes says cultivated meat may not appeal to vegans or vegetarians. She points to the healthfulness of plant-based diets, which is the diet she follows, and says some people don’t want to eat meat, no matter how it’s produced. Also, the cultivated meat industry has relied on fetal bovine serum from cows as a growth medium for the cells, though Upside Foods has developed an animal component-free alternative.

But most Americans are meat-eaters, and dieticians say meat is a good source of protein and important micronutrients including B vitamins. Part of the intrigue of cultivated meat is that it can be altered for improved nutrition. For instance, if cells were fed omega-3 fatty acids during the growing process, then, in theory, these heart-healthy fats could be absorbed into the meat.

“It is possible to create a so-called healthier version of the meat,” Hunnes says, though much of this has not yet been explored since the industry is so new.

From a public health perspective, a potential advantage of cultivated meat is the fact that without live animals to catch and spread disease, no antibiotics are needed in production facilities and there’s decreased likelihood of foodborne illness from intestinal pathogens.

For instance, salmonella, a bacteria that lives in animal intestines and is shed through their feces, would not be present in a cultivated meat production facility. “From a food safety standpoint, it probably has a one up,” on the traditional meat industry, Hunnes says.

Because this is a new industry, there are potential unknowns. Some scientists say it’s possible that unforeseen biological mechanisms could occur, such as cells multiplying in unpredictable ways. There’s a continued need for research as the industry heads towards commercialization.

The first cultivated meat products were produced from cells biopsied directly from live animals. But this process isn’t efficient. Over the last few years, start-ups have worked to identify “immortalized” cell lines, that “can be grown almost indefinitely without having to go back to the animal,” explains David Kaplan, professor of biomedical engineering of Tufts University.

His lab received a $10 million grant from USDA to help develop the cultured meat industry. “We need more and more,” immortalized cell lines, Kaplan says, as the industry looks to expand to different types of meat, poultry and fish.

For Valeti, the potential benefits of cultivated meat are too important not to try to overcome the obstacles. He sees a future with a better alternative to the current system of producing meat, and he’s determined to create it.

Valeti says, ultimately, as a doctor he might have been able to help a few thousand patients during his career. But, by taking the leap to cultivated meat, with its potential promise to overhaul meat production, he believes he can have a larger impact. “This could literally affect billions of human lives and save potentially trillions of animal lives,” Valeti says.

While awaiting regulatory approval, he’s moving forward to bring the product to people’s plates. He has signed a partnership with Dominique Crenn, the co-owner and chef of the three-Michelin-starred restaurant Atelier Crenn in San Francisco, who’s agreed to provide culinary consulting and recipe development, and once approved for marked, to serve Upside’s cultivated chicken at her restaurant.