For Israel and Lebanon, a U.S.-mediated deal settles a long-running maritime dispute 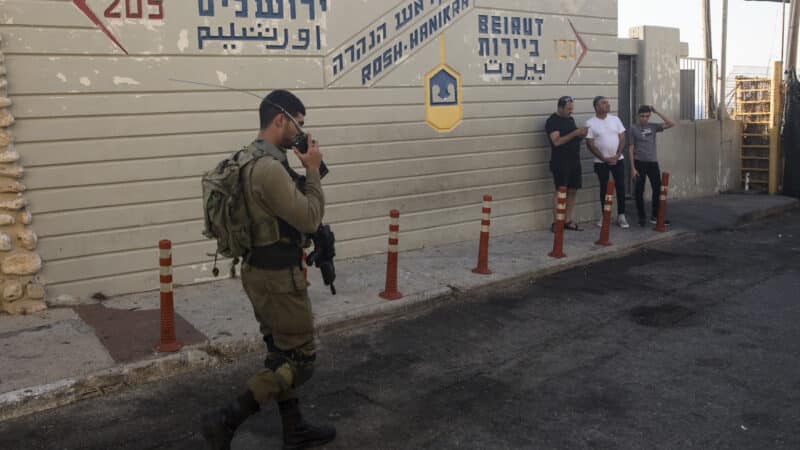 TEL AVIV, Israel — For the first time, bitter enemies Israel and Lebanon have reached an agreement on where to draw the maritime border between their countries.

The crux of the conflict was who gets to drill for natural gas in disputed waters off the Mediterranean coast. More than a decade of U.S. mediation — with some recent saber-rattling by the Lebanese militant group Hezbollah — led to a compromise on the drilling rights, announced by the U.S., Israel and Lebanon on Tuesday.

It’s far from a peace agreement. But Israel hopes the deal brings security to its tense northern boundary and Lebanon hopes the potential gas it finds can stabilize the country’s failing electricity grid and eventually inject revenue into its struggling economy.

President Biden called it a “historic breakthrough.” But the deal’s implementation is not a sure thing.

Here is a brief explanation of what the agreement is all about.

One potential gas field, the Qana prospect, lies in disputed waters. An established gas field, Karish, is in Israeli waters to which Lebanon laid claim in late 2020. As Israel was ramping up plans to start extracting gas there, Hezbollah threatened war. In July, Hezbollah sent reconnaissance drones toward Karish, which Israel’s army intercepted.

The agreement offers a fairly straightforward solution: Israel keeps the Karish field, which hadn’t really been disputed until recently, and can drill there.

The Qana field, further to the north — still unexplored by gas companies because it was disputed — will go to Lebanon, which can begin exploring how much gas might be there. To compensate for a little portion of Qana that juts over the new dividing line into Israeli waters, Lebanon will share some of the revenue with Israel.

Israel also gets to keep the three-mile zone off its coast that it says it needs for coastal security.

Israel gets security, Lebanon hopes for new energy and revenue

Israel is touting the agreement as strengthening regional stability. It would quell threats by Hezbollah, such as sabotaging Israel’s gas rig or launching rockets at Israel, because the group has said it would abide by a maritime border deal. If gas exploration helps Lebanon’s economy, it could strengthen the country’s institutions and reduce Hezbollah’s influence.

Lebanon’s chief negotiator Elias Bou Saab, in an interview with CNN, called it a “game changer.” If gas is indeed found in the Qana prospect and extracted — which could take an estimated three to four years — Lebanon hopes to use the energy for its electrical grid that often gives Lebanese only a couple hours of power a day, and hopes potential profits from gas sales can buoy its sinking economy.

The deal could lead to more talks — if it’s implemented

Lebanon and Israel are technically in a state of war. But Randa Slim of the Middle East Institute says the deal could pave the way for eventual negotiations on where to draw the countries’ land border. Former deputy Israeli navy chief Shaul Chorev calls it a first step forward on a long road to relations.

But the new border deal could run into problems. Former Israeli Prime Minister Benjamin Netanyahu calls it “historic capitulation” to an enemy, and has suggested he may not abide by it if he forms the next government in parliamentary elections next month.

Israel’s cabinet, which overwhelmingly supports the agreement, plans to formally vote on it in two weeks. There’s some criticism in Israel that the deal will not be put for a wider vote in the full 120-member parliament, and is being pushed through right before an election. But some experts argue that defusing a flashpoint for conflict is enough justification to approve of the agreement now.