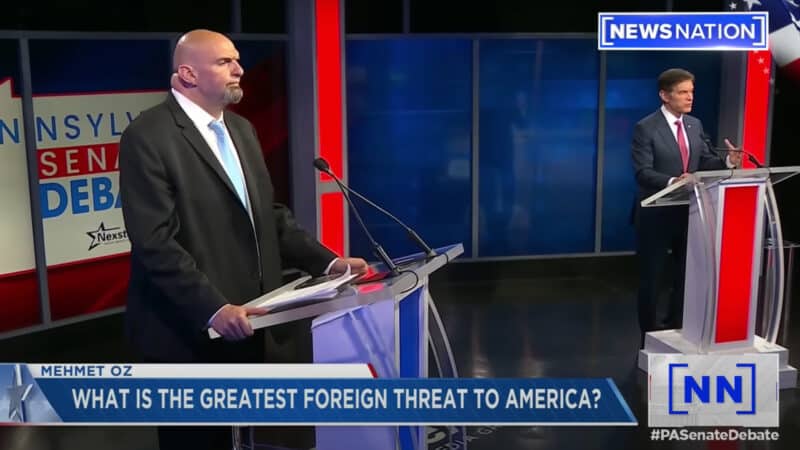 Pennsylvania Senate candidates John Fetterman, the Democratic Lt. Governor, and Republican Dr. Mehmet Oz, a former TV doctor, faced off Tuesday night in the only formal debate of the race.

The two were in an a TV studio, without an audience, in Harrisburg, Pa., where they sparred over abortion rights, fracking, the economy and crime.

Due to a stroke he suffered in May, Fetterman had video monitors in the studio with live transcription of what was being said. His doctor has said the former mayor of Braddock, Pa. is fit to serve, but the process of reading live captions had Fetterman speaking somewhat haltingly through the debate. His performance hasn’t seemed to dampen financial support though — the Fetterman campaign says they raised $1 million in just three hours after the debate ended.

“It’s clear that the people of Pennsylvania have John’s back in this race. They stepped up tonight with a gigantic show of support for John and his debate performance,” Brendan McPhillips, Fetterman’s campaign manager, said in a statement.

The Oz campaign also saw last night as a victorious debate, pointing out to supporters in an email that Fetterman failed to answer questions about his position on fracking and on releasing his medical records.

Recent polling shows Fetterman and Oz are extremely close. The Senate race has also been the most expensive; outside groups have spent more than $130 million on the race, the most spent on any other race this cycle, according to Open Secrets, which tracks money in politics.

Fetterman made a direct hit on Oz over the issue of reproductive rights, which has been a top reason driving Democrats to the polls this year, coming out forcefully that Roe v. Wade should be codified into law.

“Roe v. Wade for me should be the law… my campaign would fight for Roe v. Wade,” Fetterman said.

For his part, Oz tried to paint himself as moderate on the issue, in attempts to reach suburban voters in the state who are more moderate and independent — despite the fact that he has said he is “100% pro-life.” He also skirted around answering how he would vote on Sen. Lindsey Graham’s bill to ban abortion nationally after 15 weeks of pregnancy, except in the cases of rape, incest and to protect the life of the woman.

Oz has said he supports exceptions to a ban on abortion when it concerns rape, incest and the life of the mother, but in a new move last night, he said the decision on Roe should be up to “local political leaders.”

“As a physician, I’ve been in the room when there’s been some difficult conversations happening,” Oz said on stage. “I don’t want the federal government involved with that at all.”

By Wednesday morning, Fetterman’s campaign was already running ads tying Oz’s position on abortion to right-wing Republican candidate for governor, Doug Mastriano, who supports absolutely no exceptions in an abortion ban. The ad says Oz is out of touch and would let extreme politicians like Mastriano lead the way on abortion in the state.

Oz repeatedly used the word “extreme” to describe Fetterman’s positions throughout the debate, used it again in describing his opponent’s statements about fracking and said his opponent was “rigidly stuck” on fighting fracking.

On stage, Fetterman said he has always supported fracking — but four years ago, the lieutenant governor, then a candidate for the position, said he never would support it.