Emmanuel, a TikTok-famous emu, has avian flu after a deadly outbreak on a Florida farm 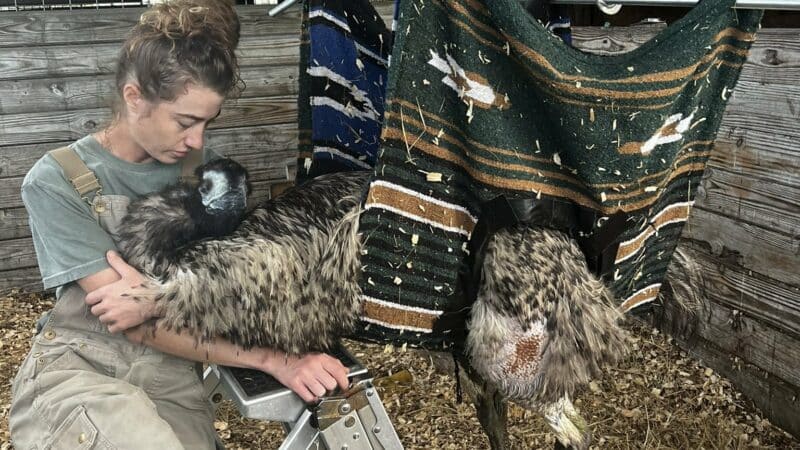 Emmanuel, a widely beloved emu who went viral on TikTok, is in dire condition battling the avian flu.

“I am still trying to wrap my head around it,” Blake wrote. “We thought we were out of the woods, when Emmanuel unexpectedly went down this past Wednesday.”

Emmanuel became a viral sensation for his behavior interrupting Blake’s TikTok videos and attacking the phone while Blake was filming.

Blake is looking for an avian specialist who can treat Emmanuel, who has suffered nerve damage in his right leg and foot, according to the Twitter thread. In the meantime, Blake posted a photo to Twitter of her helping Emmanuel start physical therapy using a homemade sling.

The H5N1 bird influenza has killed more than 45 million birds in the U.S. since the start of an outbreak in February, according to the Department of Agriculture.

Scientists believe wild migratory birds brought the virus to North America at the beginning of the year and have spread the virus to more than 40 wild bird species. While chickens and turkeys with the virus quickly die, some waterfowl with the virus can remain healthy and carry it long distances.

The flu strain historically has posed almost no risk to humans, but public experts remain concerned about the possibility that it could jump across species.

“Because humans have no prior immunity to these viruses typically, if they were to be infected and spread the virus to other humans, then we could have another pandemic virus on our hands,” Todd Davis, an expert on animal-to-human diseases at the Centers for Disease Control and Prevention (CDC), told NPR earlier this year.

The United Kingdom is also dealing with a bird flu outbreak — its largest ever — and declared an Aviation Influenza Prevention Zone on Monday, requiring bird keepers in Great Britain to follow strict biosecurity measures. Bird keepers in Great Britain will have to keep free-ranging birds within fenced areas and keep domestic ducks and geese separate from other poultry. Keepers also will need to regularly clean and disinfect their footwear.