Early signs a new U.S. COVID surge could be on its way 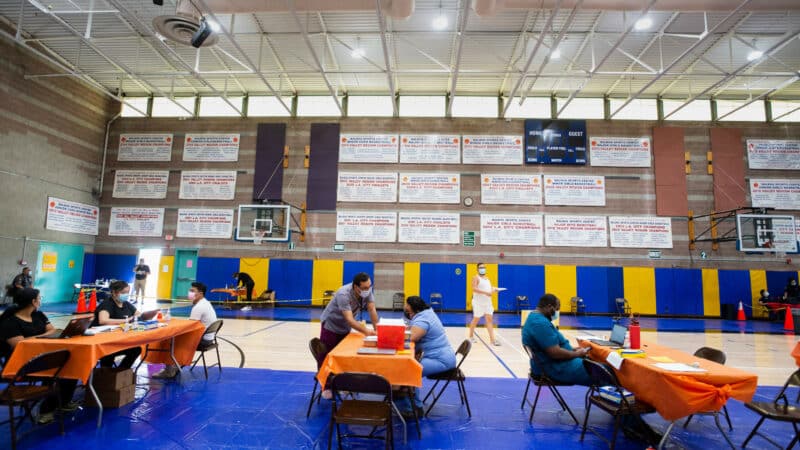 As the U.S. heads into a third pandemic winter, the first hints are emerging that another possible surge of COVID-19 infections could be on its way.

So far, no national surge has started yet. The number of people getting infected, hospitalized and dying from COVID in the U.S. has been gently declining from a fairly high plateau.

But as the weather cools and people start spending more time inside, where the virus spreads more easily, the risks of a resurgence increase.

The first hint of what could be in store is what’s happening in Europe. Infections have been rising in many European countries, including the U.K., France, and Italy.

“In the past, what’s happened in Europe often has been a harbinger for what’s about to happen in the United States,” says Michael Osterholm, director of the Center for Infectious Disease Research and Policy at the University of Minnesota. “So I think the bottom line message for us in this country is: We have to be prepared for what they are beginning to see in Europe.”

Several computer models are projecting that COVID infections will continue to recede at least through the end of the year. But researchers stress there are many uncertainties that could change that, such as whether more infectious variants start to spread fast in the U.S.

In fact, scientists are watching a menagerie of new omicron subvariants that have emerged recently that appear to be even better at dodging immunity.

“We look around the world and see countries such as Germany and France are seeing increases as we speak,” says Lauren Ancel Meyers, director of the UT COVID-19 Modeling Consortium at the University of Texas at Austin. “That gives me pause. It adds uncertainty about what we can expect in the coming weeks and the coming months.”

However, it’s not certain the U.S. experience will echo Europe’s, says Justin Lessler, an epidemiologist at the University of North Carolina who helps run the COVID-19 Scenario Modeling Hub.

That’s because it’s not clear whether Europe’s rising cases are related to people’s greater susceptibility to new subvariants they’ve not yet been exposed to. In addition, different countries have different levels of immunity.

“If it is mostly just behavioral changes and climate, we might be able to avoid similar upticks if there is broad uptake of the bivalent vaccine,” Lessler says. “If it is immune escape across several variants with convergent evolution, the outlook for the U.S. may be more concerning.”

In fact, some researchers say the U.S. is already starting to see early signs of that. For example, the levels of virus being detected in wastewater are up in some parts of the country, such in Pennsylvania, Connecticut, Vermont and other parts of the Northeast. That could an early-warning sign of what’s coming, though overall the virus is declining nationally.

“It’s really too early to say something big is happening, but it’s something that we’re keeping an eye on,” says Amy Kirby, national wastewater surveillance program lead at the Centers for Disease Control and Prevention.

But infections and even hospitalizations have started rising in some of the same parts of New England, as well as some other northern areas, such as the Pacific Northwest, according to Dr. David Rubin, the director of the PolicyLab at Children’s Hospital of Philadelphia, which tracks the pandemic.

“We’re seeing the northern rim of the country beginning to show some evidence of increasing transmission,” Rubin says. “The winter resurgence is beginning.”

Assuming no dramatically different new variant emerges, it appears highly unlikely this year’s surge would get as severe as the last two years in terms of severe disease and deaths.

“We have a lot more immunity in the population than we did last winter,” says Jennifer Nuzzo, who runs the Pandemic Center at the Brown University School of Public Health.

“Not only have people gotten vaccinated, but a lot of people have now gotten this virus. In fact, some people have gotten it multiple times. And that does build up [immunity] in the population and reduce overall our risk of severe illness,” Nuzzo says.

Another crucial variable that could affect how the impact of a rise of infections is how many people get one of the new bivalent omicron boosters to shore up their waning immunity.

But booster uptake in the U.S. was already sluggish. “Nearly 50% of people who are eligible for a booster have not gotten one,” says William Hanage, an associate professor of epidemiology at the Harvard T.H. Chan School of Public Health. “It’s wild. It’s really crazy.”

And the demand for the newest boosters is pretty lethargic so far. Fewer than 8 million people have gotten one of the new boosters since they became available over the Labor Day weekend, even though more than 200 million are eligible.

Given the likelihood of a surge, it’s critical that people be up to date on vaccines, says Nuzzo. “The most important thing that we could do is to take off the table that this virus can cause severe illness and death,” she says.

“There are a lot of people who could really benefit from getting boosted but have not done so.”

As the world heads into a third pandemic winter, officials in the U.S. are bracing for what could be one more COVID surge. So are the hints of another wave starting to emerge? NPR health correspondent Rob Stein joins us now.

Rob, we’ve been hearing warnings about another potential wave for a while now. What’s the latest?

ROB STEIN, BYLINE: So, you know, A, no national surge has started yet. The number of people getting infected, hospitalized and dying has just been kind of percolating along at what some epidemiologists have been calling a high plateau and now even seem to be trending down a bit. But there are some hints that the country could be approaching a new surge. The first possible storm clouds are appearing in Europe.

Infections have been rising in countries like the U.K., France, Germany. I talked about this with Michael Osterholm at the University of Minnesota.

MICHAEL OSTERHOLM: In the past, what’s happened in Europe often has been a harbinger of what’s about to happen in the United States. So I think the bottom-line message for us here in this country is we have to be prepared for what they are beginning to see in Europe.

STEIN: In fact, some say the U.S. is already starting to see early hints of what could be coming soon.

MARTINEZ: Hints? Oh, no. What kind of hints?

STEIN: Well, first of all, the levels of virus being detected in wastewater are up slightly in some spots in the Northeast, like in Pennsylvania, Massachusetts, Maine. Now, the CDC says it’s too soon to know if that means anything, but infections and even hospitalizations also appear to have ticked up in some places.

Dr. David Rubin runs the PolicyLab in Philadelphia, which tracks the pandemic.

DAVID RUBIN: We’re seeing the northern rim of the country beginning to show some evidence of increasing transmission – upstate New York, Vermont, Maine, Massachusetts, where hospitalizations are rising again. We’re also seeing the Pacific Northwest, Washington and Oregon in particular, start to change and some of those mountain regions start to change as well, too. The sort of winter resurgence is beginning.

MARTINEZ: All right. So if this winter resurgence is really beginning, how bad could it get?

STEIN: You know, A, assuming no dramatically more dangerous variants suddenly emerges, no one thinks this winter surge will get anywhere near as bad as the last two in terms of severe disease and deaths. I talked about this with Jennifer Nuzzo, who runs the pandemic center at Brown University.

JENNIFER NUZZO: We have a lot more immunity than we did last winter. Not only have people gotten vaccinated, but a lot of people have now gotten this virus. In fact, some people have gotten it multiple times. And so that does build up in the population and reduce overall our risk of severe illness.

STEIN: But scientists are watching a menagerie of new omicron subvariants that appear to be even better at dodging our immune systems and could help drive a new surge. And Nuzzo says another really important factor is how many people are up to date on their vaccinations, including getting one of the new omicron boosters.

STEIN: You know, A, not great. Only about 7 1/2 million people have gotten one of the new bivalent omicron boosters, even though the shots have been available since Labor Day, and more than 200 million people are eligible. I talked about this with William Hanage at the Harvard T.H. Chan School of Public Health.

WILLIAM HANAGE: Seven and a half million sounds like a lot, but this is a country of hundreds of millions. So there’s a hell of a lot more people who could be protected, which is wild. It’s really crazy.

STEIN: Because that protective wall of immunity people have is fading just as colder weather and holiday travel might bring a new wave of COVID.

STEIN: Sure thing, A.