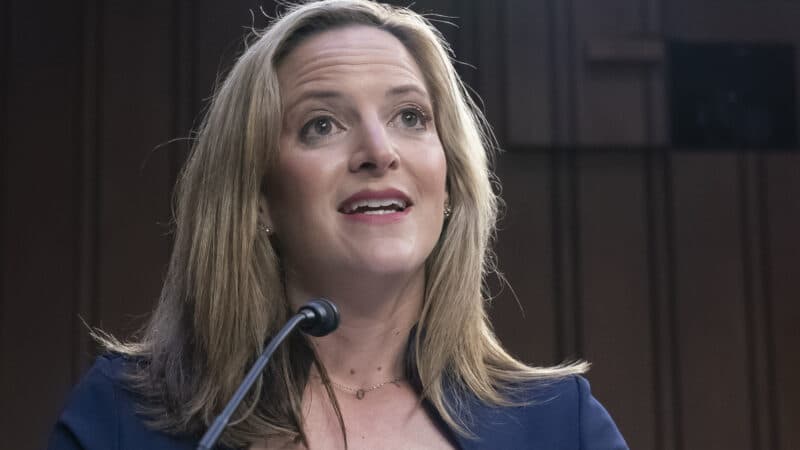 Democrat Jocelyn Benson, who faced death threats after overseeing the 2020 election, has been reelected secretary of state of Michigan, according to a race call by The Associated Press.

Benson defeated Republican Kristina Karamo, a far-right candidate who has spread a number of baseless conspiracies about elections and other things.

Karamo made a name for herself in 2020 by claiming, without evidence, that she witnessed election fraud in Detroit. On her podcast, she also pushed debunked ideas about the Jan. 6 attack at the U.S. Capitol and even the scientific theory of evolution.

“Darwinian evolution is a total scam, it is a complete farce, it is just such a dumb theory,” she said on one podcast reviewed by NPR.

Benson, however, has become one of the leading state-level voices over the past two years defending American elections.

Former President Donald Trump targeted her for doing so, and shortly after the 2020 election, dozens of armed protesters visited Benson’s home and she recounted later that she had heard that Trump once suggested in a White House meeting that she should be executed.

“There has been no real accountability for [Trump] or anyone else who used positions of authority to spread misinformation,” Benson told NPR last year. “Without that accountability, without any consequences for anyone… We must expect to see it continue.”

In media appearances leading up to Tuesday’s election, Benson sounded the alarm about election deniers running for positions of power within the voting system.

“We’re very much in the midst of a national effort to discredit our elections,” Benson said. “There will be people who choose to be politicians first and election administrators second or not at all.”

First elected in 2018, after losing her initial bid for the office in 2010, Benson is the former dean of Wayne State University law school. She is also the author of a book about the role of secretaries of state in American democracy.

Karamo was one of a number of candidates running to oversee voting this midterms who say that the 2020 election was stolen. She was also part of a coalition of candidates who said they drastically wanted to reduce voting access as a result.