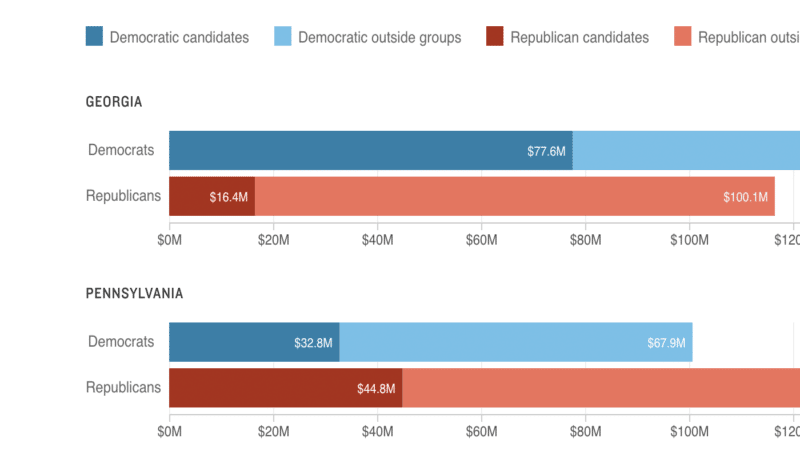 More than $1.6 billion has been spent or booked on TV ads in a dozen Senate races, with $3 out of every $4 being spent in six states — Georgia, Pennsylvania, Arizona, Wisconsin, Nevada and Ohio, according to an NPR analysis of data provided by the ad-tracking firm AdImpact.

Most of that money is coming from dark money outside groups with little-to-no donor transparency — and Republicans are getting a huge boost from them.

Outside groups have poured in nearly $1 billion to buoy GOP Senate candidates. Just how important have these groups been to Republicans? Eighty-six percent of the money going toward pro-GOP TV ads is coming from these outside groups, compared to 55% for Democrats. (Below, see how much Republican and Democrats’ campaigns and outside groups are spending on TV ads in key states.)

Put simply: if it weren’t for these outside groups, Republican candidates would be swamped on the airwaves.

The concentrated ad spending is reflective of just how narrow the fight for control of the Senate is. The chamber is evenly divided with 50 Democrats and 50 Republicans. Democrats, though, are in charge of the agenda because there is a Democratic president, and in her role as vice president, Kamala Harris comes in to break ties.

Republicans need a net pick up of two Senate seats to win a majority, and many of the top races will likely be decided by only a few percentage points.

So the campaigns and outside groups are pouring in tens, if not hundreds, of millions of dollars in each state to sway the ever-shrinking percentage of persuadable voters.

Because campaigns get lower ad rates than these groups, they can run more TV ads than outside groups for the same amount of money

So the inability for Republican campaigns to keep pace with Democrats has meant these GOP outside groups have had to make up a lot of ground, spending more for less.

The biggest outside spender is the Senate Leadership Fund, the group aligned with Republican Senate Leader Mitch McConnell of Kentucky. It has spent $219 million in eight states, with $110 million going to just three races – Georgia, Pennsylvania and Ohio. Each of those states feature Trump-backed Republican candidates, who have been struggling.

Including all expenditures in addition to TV ad spending — like staffing, mailers, events and get-out-the-vote efforts — outside groups have so far spent more than $1.3 billion, a record for a midterm election, according to OpenSecrets, which tracks campaign finance spending. It continues a trend since the Supreme Court’s 2010 Citizens United decision opened the floodgates for outside spending.

Overall, OpenSecrets projects that more than $9 billion will be spent on federal elections in 2022, including Senate and House races. It’s a record for midterm elections and represents a massive escalation from recent years, double, for example, what was spent in 2014 and a 32% increase from 2018.

Here are the top 10 states seeing the most spending on TV ads with a breakdown below that of what’s come from campaigns versus outside groups: