Damien Hirst just burned 1,000 of his paintings and will soon burn thousands more 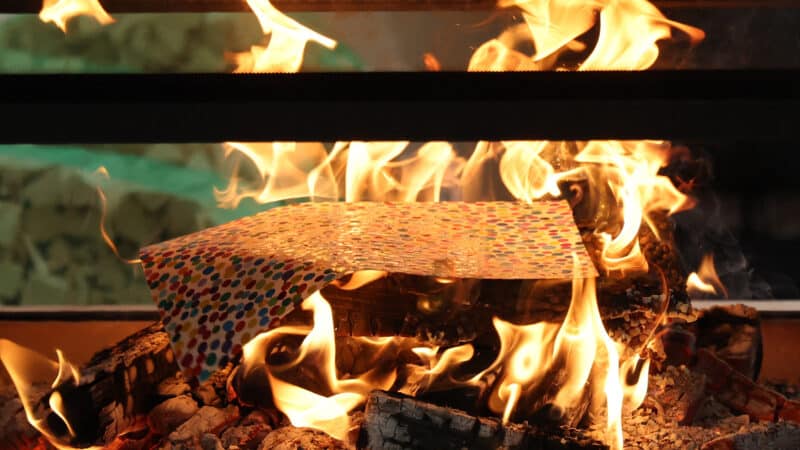 British artist Damien Hirst is among the many art-world giants who have set fire to their work, having burned 1,000 of his artworks Tuesday. He streamed the event on Instagram and is set to burn thousands more works of art.

It’s part of his project “The Currency.” It consists of a collection of 10,000 NFTs. Each non-fungible token corresponds to a physical painting featuring his signature multicolored dots, made from enamel paint on handmade paper. The pieces were initially available for $2,000, which is affordable compared with what Hirst’s work has been known to go for.

“A lot of people think I’m burning millions of dollars of art but I’m not, I’m completing the transformation of these physical artworks into nfts by burning the physical versions,” Hirst wrote in an Instagram caption. “the value of art digital or physical which is hard to define at the best of times will not be lost it will be transferred to the nft as soon as they are burnt.”

A year after buying a piece from “The Currency,” collectors had to make a choice. They could either take the painting, meaning they would lose the NFT, or hold onto the NFT, meaning the painting would be burned.

“‘The Currency’ pitted Hirst’s foray into the new world of digital art against his old-school practice, asking the art market to decide which was more valuable,” wrote Artnet News’ Caroline Goldstein.

The buyers were almost evenly split in their decisions, with 5,149 opting to trade their NFT for the original painting and 4,851 choosing the NFT. The pieces are being shown at the Newport Street Gallery in London and will be burned during the art fair Frieze London, which runs from Oct. 12 through 16.

An NFT is a digital identifier that confirms the authenticity and ownership of a tangible or digital object. It acts as a sort of receipt, and its uniqueness makes it valuable.

In the contemporary art market, art is traded like an asset and seen as a financial instrument, filmmaker Nathaniel Kahn told NPR in 2018. NFTs are a new type of asset that can be commodified. The energy it takes to create them has also made them notoriously bad for the environment.

Many comments on Hirst’s Instagram post about the burning were critical. “Either way it’s all about the money,” wrote one user. “Interesting strategy of maxing the carbon footprint for this collection,” wrote another.