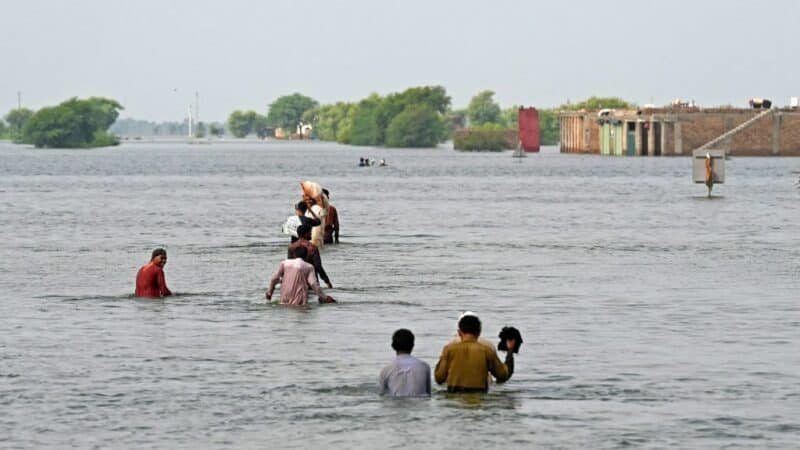 Developing countries are going to need a lot more money to deal with the risks they face from climate change, according to a new United Nations report released on Thursday.

The impacts from global warming have hit the world’s poorest countries especially hard so far, even though they’re responsible for a relatively small share of the greenhouse gasses that are causing temperatures to rise. Flooding in Pakistan this summer that killed at least 1,500 people and a multi-year drought in East Africa are evidence of “mounting and ever-increasing climate risks,” the U.N. report says.

To help developing nations prepare for more extreme storms, heat waves and floods, industrialized countries gave them around $29 billion in 2020. But that’s a fraction of what the developing world needs in order to reduce the damage from extreme weather events, the report says. By the end of the decade, developing countries will likely need up to about 10 times more money every year to adapt to a hotter planet. By midcentury, those annual costs could soar to more than $500 billion.

“The message of this report is clear: strong political will is needed to increase adaptation investments and outcomes,” Inger Andersen, executive director of the U.N. Environment Programme, wrote in a foreword to the report.

“If we don’t want to spend the coming decades in emergency response mode, dealing with disaster after disaster, we need to get ahead of the game,” she added.

The U.N. climate negotiations scheduled to begin over the weekend in the Egyptian resort town of Sharm el-Sheikh are the 27th Conference of the Parties, or COP27. They are expected to focus on efforts to boost the amount of money that’s available to deal with climate change, especially in developing countries.

Most climate financing is going to cutting emissions

Industrialized nations still haven’t delivered on a longstanding pledge to provide $100 billion a year by 2020 to help developing countries adapt to climate change and to cut emissions in order to limit further warming, or what’s known as climate mitigation. Of the $83.3 billion developing countries received in 2020, most of the money went to mitigation projects, not adaptation, according to the Organization for Economic Co-Operation and Development.

“The discourse needs to be raised significantly, the level of ambition, so that you can actually continue to do what you’re doing on mitigation even more, but you at the same time meet the adaptation needs,” says Mafalda Duarte, CEO of Climate Investment Funds, which works with development banks like the World Bank to provide funding to developing countries on favorable terms.

To prepare for more extreme weather, the world needs to invest more money in projects to reduce the hazards, vulnerability and exposure that people face, the U.N. says. That could include building water reservoirs in areas at risk of drought, ensuring infrastructure is built to stand up to the impacts of a hotter climate, and providing communities with early warning systems to help people evacuate in emergencies.

At the end of last year’s U.N. climate conference, developed countries were urged to at least double their funding for adaptation from 2019 levels by 2025. However, the U.N. says even that amount of money would be insufficient to address the needs that exist in developing nations to prepare for climate risk.

The U.N. also warned that issues unrelated to climate change, including worldwide inflation and the energy crisis caused by the war in Ukraine, could limit how much money wealthier countries are willing to provide developing nations for adaptation.

Duarte says that failing to spend the money that’s necessary to limit and prepare for climate change exposes the entire world to potential risks. Those risks could include armed conflicts, refugee crises and disruptions in financial markets, analysts say.

“We have to change our mindset and the way we think, because, actually, when it comes to climate, you know, an investment across borders in other places is a domestic investment,” Duarte says.

Governments have tried two different ways to address climate change. One is to prevent more of it by emitting less carbon. The other is to adapt so we can survive the changes already underway. A United Nations report examined the world’s adaptation so far and found we’re doing a terrible job. The study was released days before world leaders gather for a climate conference in Egypt. Michael Copley is with NPR’s climate desk and he’s covering this. Good morning.

INSKEEP: What kinds of adaptations are we talking about here?

COPLEY: We’re talking about doing things to help people and the environment cope with more extreme floods and storms and heatwaves. So that might look like planting mangroves to almost act like barrier islands in coastal areas to take some of the energy out of storms. It means building infrastructure – like roads and bridges and train lines – to be able to stand more extreme weather. It means planting crops that are more tolerant of worsening drought. And it means making sure that communities have early warning systems so that people can get out when emergencies happen.

INSKEEP: I can imagine things from recent times that have been done in the United States, like building houses higher up in New Orleans after the flooding of Katrina, or a town in Florida that survived the recent hurricane in better shape because the utility wires were underground and weren’t going to be blown away by wind. These all sound pretty reasonable. But how much is being done compared to the need?

COPLEY: The U.N. says not nearly enough. Some of the worst impacts we’re seeing so far from climate change are hitting developing countries. Think of the floods this summer in Pakistan.

COPLEY: They caused billions of dollars in damage, and at least 1,500 people died. Now, Pakistan, like a lot of developing countries, has played a pretty minor role in generating the emissions that are causing global warming. Most of that pollution has come from wealthy countries like the United States. So in 2020, industrialized countries provided developing nations with $29 billion for climate adaptation. But according to the U.N., they’ll need up to 10 times more money than that every year by the end of the decade. And the numbers are going to keep going up as temperatures rise.

INSKEEP: I was just discussing this in the car with one of my kids because it came up in their school. There’s this divergence of interests. You have industrialized countries that have emitted a lot of carbon and may have money to pay for some of the damages. But you have these developing countries, which are just different countries. Do the developed nations fully see it in their interest to pay for what needs to be done?

COPLEY: You know, I think that they acknowledge that it is in their interests. But they’ve been talking about this for years. And I think that’s a big source of frustration in the developing countries. Look; a decade ago, developed countries pledged $100 billion a year to help developing countries cut emissions and adapt to the risks that we’re seeing. That promise hasn’t been kept. But when you talk to analysts, what they say is $100 billion is just a drop in the bucket. And what’s really challenging in a moment when money is in short supply for developing countries is the fact that the world needs to do two things at once. It needs to adapt to the risks that we’re seeing. And it needs to cut emissions, what’s known as climate mitigation. Here’s Mafalda Duarte, the CEO of Climate Investment Funds, who works with development banks on these issues.

MAFALDA DUARTE: You know, we cannot stop putting emphasis on mitigation because otherwise, the adaptation costs will just skyrocket. And they will basically be very difficult to meet.

INSKEEP: I would imagine that’s going to be one of the main questions of this climate conference. Where’s the money? And who’s going to pay it?

COPLEY: Listen; I think money generally is going to be at the top of the agenda. Developed countries are under a lot of pressure to make good on the financial commitments they made. Coming out of last year’s conference, they were being urged to at least double climate adaptation financing in the next few years for developing countries. The issue right now is countries all over the world are dealing with inflation. And they’re dealing with an energy crisis from the war in Ukraine. And it’s not clear right now whether that turmoil is going to stand in the way of more money flowing to these poor countries that are most vulnerable to climate change.

INSKEEP: Michael Copley, thanks so much.

(SOUNDBITE OF A PICTURE OF HER’S “INTRO”) Transcript provided by NPR, Copyright NPR.