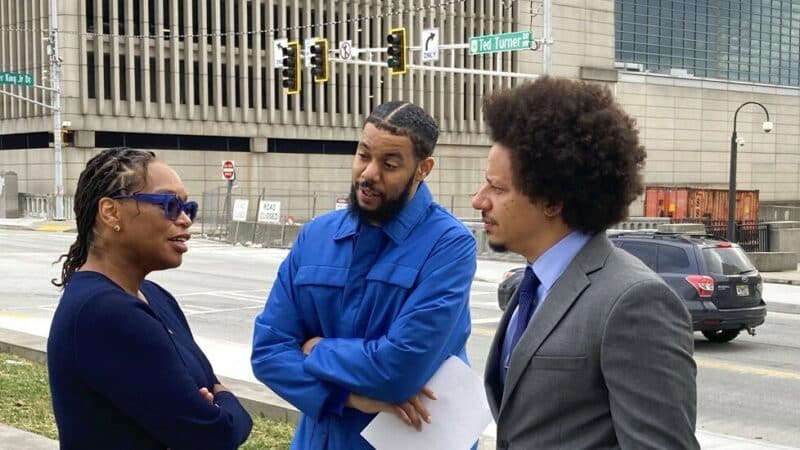 Comedians Eric André and Clayton English said they were racially profiled by police at the Hartsfield-Jackson Atlanta International Airport on separate occasions in 2021 and 2020.

They filed a lawsuit against the Clayton County Police Department and district attorney’s office on Tuesday, calling on the court to declare that it’s unconstitutional for police officers to stop passengers on the bridges from their gate to their airplane, question them and search their bags.

“CCPD calls these stops ‘consensual encounters’ and ‘random,’ ” the lawsuit states. “They are neither; the CCPD jet bridge interdictions rely on coercion, and targets are selected disproportionately based on their race.”

André said two officers stopped him on the jet bridge during a layover in Atlanta in April 2021 and asked if he had illegal drugs. After denying he had drugs, the officers continued their inquiry. André said he was the only Black person he could see on the jet bridge.

The Clayton County Police Department released a statement after André tweeted about the incident, calling it a “consensual encounter.”

English said at a Tuesday news conference that he had a nearly identical experience six months earlier, and had “felt completely powerless, violated and cornered.”

While stopped on the jet bridge, English noted that people “gawking” at him, and that he wondered for the entire 3 1/2-hour flight whether he would be arrested when the plane landed.

“By ambushing passengers in this manner, the Unit’s officers compound the enormous, preexisting compulsion to cooperate with airport law enforcement by exploiting the passengers’ fear that they will create an untoward scene or will appear guilty, subversive, or dangerous to their fellow passengers,” the lawsuit states.

English reached out to André after seeing his tweet on April 21, 2021, detailing the experience.

According to the lawsuit, the Clayton County Police Department conducted 402 jet bridge stops from Aug. 30, 2020 to April 30, 2021 and found fewer than 0.08 pounds of illegal drugs and six prescription pills that passengers did not have a prescription for.

Officers also seized more than $1 million in cash through asset forfeitures, which allows them to seize property they suspect might have been used in a crime.

“These seizures do not meaningfully combat drug trafficking, but they do provide a financial windfall for the department by taking advantage of the permissive civil standards for asset forfeitures and the reluctance of individuals (particularly individuals of color) to challenge seizures,” the lawsuit states.

Of the 402 jet bridge stops, 378 stops had the race of the passenger listed in the records; 56% of those 378 passengers were Black and 68% were people of color, according to the lawsuit. Those are far higher percentages than in both the local population and U.S. air travelers as a whole.