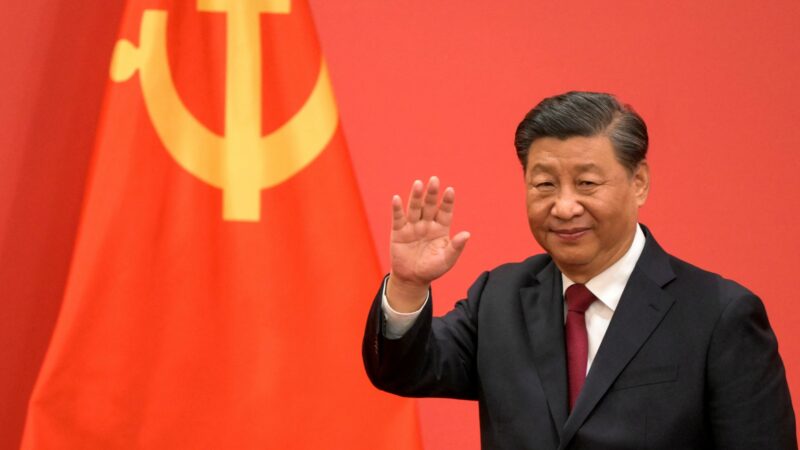 BEIJING — Chinese leader Xi Jinping has emerged from a twice-a-decade Communist Party congress stronger than ever after securing a third term as party boss and pushing all but his most loyal of allies out of the picture.

On Sunday, Xi smiled as he led the newly selected group of men at the pinnacle of power in China – the Politburo Standing Committee – onto a stage before the media. Xi has long been expected to cling to power, but the congress cemented his dominance with breathtaking clarity.

Xi Jinping is surrounded by allies, a mark of his power

All of the six other men on the Politburo Standing Committee are considered close associates of Xi. They’ve worked with him in different parts of the bureaucracy and proved their loyalty.

Four members of the previous Standing Committee retired to make way for new blood. Two had reached or passed the traditional retirement age of 68. But two had not – and their exit this weekend was a surprise.

Premier Li Keqiang, who was No. 2 in the party hierarchy, and Vice Premier Wang Yang were pushed out. Both are 67 years old and would have been eligible to stay on based on prior informal party rules.

Party ideology tsar Wang Huning, who is also 67, retained his membership in the Standing Committee. Wang is a trusted aid to Xi and is credited with helping formulate Xi’s ruling philosophy. (Wang Huning and Wang Yang are not related.)

Another key promotion went to Li Qiang, who took the No. 2 spot in the Standing Committee. As party boss of Shanghai, many thought Li’s chances for promotion were sunk by the poorly planned and deeply unpopular COVID lockdown in April and May of China’s most cosmopolitan city. But state media had rallied behind it, in a sign of support from on high.

Li is poised to become premier when parliament meets in March.

“If Li Qiang does become premier, which looks now certain, it clearly means that loyalty is more important than performance,” said Tony Saich, an expert on Chinese politics at Harvard University’s Kennedy School of Government.

“It speaks … to the extraordinary dominance that Xi Jinping has exerted over all the proceedings in the congress,” Saich said.

Finally, Vice Premier Hu Chunhua, a two-time Politburo member once considered a shoo-in for the Standing Committee, and possibly even a successor to Xi, was demoted. Hu made his way up the political ladder in part through a patronage network – the Communist Youth League – that Xi has largely neutralized. Hu was not re-elected to the Politburo.

Analysts say that while Xi may see the loyalist lineup as a coup for his agenda, it risks hampering Beijing’s ability to be more nimble and creative in managing thorny challenges, like COVID-19 and the sputtering economy.

The party charter was amended

Amendments to the language in the Communist Party charter also bolstered Xi’s strength.

The party congress added two arcane but important political ideas to the party constitution: the “two establishes” and the “two safeguards.”

The “two establishes” call on party members to recognize Xi as the “core” of the party and to regard his governing philosophy as a key tenet of party rule. The “two safeguards” require party members to protect Xi’s status as the core and to safeguard the party’s leading role in politics in China.

The congress also enshrined opposition to, and deterrence of, anyone seeking “Taiwan independence.”

Taiwan has been self-governed since 1949 when Nationalist Party troops fled there after the Communist Party swept to power. Beijing considers it a part of China to be “reunited” with the mainland, by force if necessary.

“Reunification” is seen as a key part of Xi’s broad agenda to “rejuvenate” China and make it a strong nation. The inclusion of Taiwan in the party constitution highlights its importance.

Xi kicked the can down the road in terms of succession

When Xi’s recent predecessors were in charge, party congresses were occasions to elevate younger leaders for grooming as eventual successors. Xi himself took this path to the top.

But he has shunned the practice. In 2017, he did not anoint a successor, and again at this party congress Xi, 69, has left few clues about his plans for eventual succession. None of the new Politburo Standing Committee members are young enough to be considered true successors to Xi in five or 10 years’ time.

“Even a quick glance at the Politburo … obviously doesn’t seem to indicate a person who’s there to be a successor,” Saich said. “So it’s clear Xi intends to rule. He intends to rule as the key figure. And it pushes any question of succession off into an unpredictable future. And to me that can be destabilizing.”