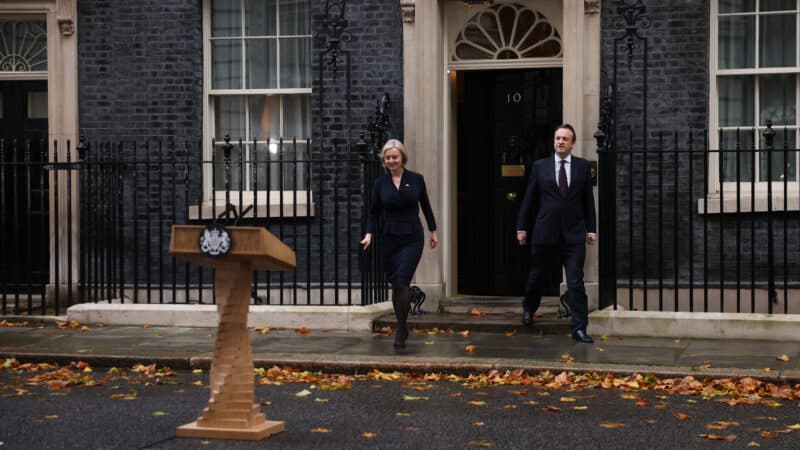 LONDON — British Prime Minister Liz Truss has announced her resignation following weeks of criticism from her opponents and members of her own Conservative Party and the resignation of two of her top Cabinet picks.

Truss said she will remain as prime minister until a successor is chosen. She said a leadership election will be completed within the next week.

She said she came into office at a time of great economic instability and was elected with a mandate for change, but, “I recognize though I cannot deliver the mandate.”

She announced her resignation in brief remarks outside the prime minister’s residence in London.

Serving just six weeks in office, Truss is one of the shortest-serving premiers in British political history. A series of significant missteps meant that much of the political vision she outlined during her campaign for leader was ditched after seriously adverse reactions from financial markets.

Together with her friend and political ally Kwasi Kwarteng, Truss had entered office promising to cut taxes and kickstart the country’s economic growth through a form of “trickle-down economics.” But when Kwarteng announced major tax cuts to parliament, alongside new spending plans focused on protecting households from high energy prices, the country’s currency plummeted in value, while the costs of government borrowing shot up.

As a consequence, British mortgage costs looked set to soar, while import costs rose for businesses as well, and over the course of several weeks, Truss was forced to reverse her plans piece by piece until eventually she sacked Kwarteng and replaced him with a former political rival, Jeremy Hunt, as finance minister.

Within days, Hunt had almost entirely canceled the remainder of Truss’ economic program, and as opponents inside and outside her Conservative Party began calling for her to step down, another senior cabinet member, interior minister Suella Braverman, was herself forced to resign for sending a sensitive document from a personal email account. In her resignation letter, she expressed concern about “the direction of the government,” and seemed to accuse Truss’ actions in recent weeks of not constituting “serious politics.” Braverman was replaced by another Conservative whom Truss had pushed out of her cabinet just six weeks earlier when she took office.

Under a scornful line of questioning Wednesday from her chief political antagonist, Labour leader Sir Keir Starmer, and amid jeers from opposition members, Truss insisted to parliament that she was a “fighter, not a quitter.”

Hours later, chaotic efforts to force Conservative legislators to vote symbolically in favor of fracking — another key element of her leadership platform — ended in accusations that members had been manhandled by her supporters into voting with her government. By Thursday morning, Truss confirmed she would be resigning her position.

Truss replaced Boris Johnson as prime minister this summer. Johnson was forced out by his party after questions were raised about his character amid a series of scandals.