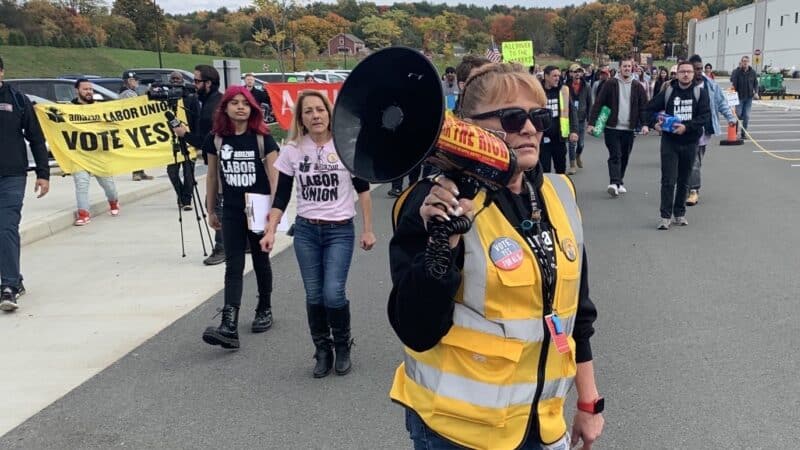 Amazon warehouse workers near Albany, N.Y., have voted no to a union, delivering a blow to the fledgling effort to organize employees at one of the country’s largest employers.

More than 900 Amazon employees were eligible to vote on whether to join the upstart Amazon Labor Union, run by current and former Amazon warehouse workers unaffiliated with traditional unions. The vote tally was 406 votes against unionizing to 206 votes in favor.

The ALU previously made history when it won a union election on Staten Island in New York, unionizing Amazon’s first U.S. warehouse, one with more than 8,300 workers. Later, it fell short of winning enough votes to unionize a second warehouse on Staten Island in New York. And Amazon is still pushing to overturn the ALU’s win in a case that’s likely to make its way into courts.

After decades of successfully fighting off labor organizing attempts as it grew into one of the nation’s top employers, Amazon has now faced five union elections in less than two years. With Tuesday’s result, unions have so far prevailed in only one of the five. Last week, Amazon workers in California became the latest to petition for their own vote to join the ALU.

At the Albany-area warehouse, known as ALB1, workers voted in person for four days, casting ballots in a tent in the facility’s parking lot. National Labor Relations Board officials tallied them by hand in a process streamed over live video on Tuesday.

“This won’t be the end of ALU at ALB1,” ALU President Chris Smalls said in a statement, accusing the company of intimidating workers and otherwise influencing the election outcome.

“We are filled with resolve to continue and expand our campaign for fair treatment for all Amazon workers,” he said. “When workers are empowered to take on a greedy uncaring company with a poor safety track record and a high churn rate of workers, it isn’t a loss, it’s an ongoing battle.”

Smalls — a warehouse employee fired by Amazon after he helped stage a pandemic-era walkout — previously said he had heard from workers at dozens of additional Amazon warehouse interested in unionizing.

“We’re glad that our team in Albany was able to have their voices heard, and that they chose to keep the direct relationship with Amazon as we think that this is the best arrangement for both our employees and customers,” Amazon spokesperson Kelly Nantel said in a statement Tuesday. “We will continue to work directly with our teammates in Albany, as we do everywhere, to keep making Amazon better every day.”

At the Albany-area warehouse, federal labor officials had given the go ahead to the union election after assessing the number of signatures gathered by organizers. Rules require them to submit signatures from 30% of the workers they seek to represent. The union had estimated about 400 workers were eligible to vote, though Amazon later said the warehouse employed more than 800 people.

Pro-union workers at the warehouse have advocated for higher pay and cite various safety concerns. Earlier this month, a fire broke out; an investigation is ongoing. Organizers have also accused Amazon of intimidation and retaliation, while the company staged mandatory meetings for employees aimed to discourage pro-union votes.

Amazon representatives have said that meetings were to educate workers about the process of joining a union and that the company made hundreds of changes related to operations and safety based on employee feedback. Amazon touts its benefits and wages, with starting pay of warehouse and delivery workers increasing to $16 an hour beginning this month.

Under mounting scrutiny for its worker policies, Amazon in December reached a settlement with the National Labor Relations Board aimed at making it easier for employees to organize. Still, the company continues to face numerous charges of unfair labor practices, which it rejects.

Shortly after the ALU’s Staten Island success, workers at another, smaller Staten Island warehouse voted against joining the union. And in Alabama, Amazon warehouse workers held a do-over union vote after U.S. labor officials found the company unfairly influenced their original election in 2021. The new election results remain too close to call .

Before that, in 2014, a small group of maintenance and repair techs at a Delaware warehouse voted against unionizing. In 2000, a union drive tried to organize 400 Amazon call-center workers in Seattle, but the company shuttered the center amid a reorganization during dot-com bust.