A nonprofit says preterm births are up in the U.S. — and it’s not a partisan issue 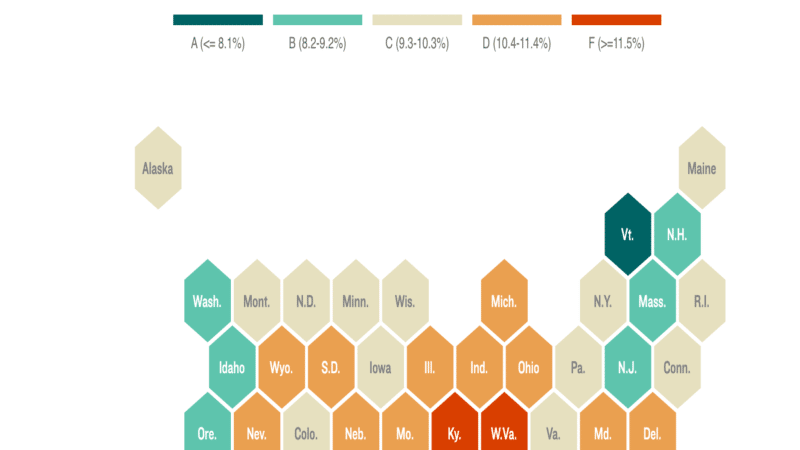 Katie Cato and her husband Neil were delighted when she became pregnant in late 2019 after a difficult journey with IVF — so much so that they kept putting off the announcement, always waiting to have one more ultrasound or hit one more benchmark before sharing the good news.

Things got complicated around week 23 of the pregnancy when she noticed a lack of movement. By week 24, a previously scheduled ultrasound revealed issues with the umbilical cord blood flow, and Cato’s doctor told them to get to the hospital that night.

They drove an hour from their home in rural Lavonia, Ga., to the nearest advanced hospital, in Greenville, S.C. The baby’s condition worsened over several frantic days, and he was born via emergency C-section at just 25 weeks. (For context: Pregnancy typically lasts around 40 weeks, with any births sooner than 37 weeks considered “preterm.”)

The boy, named Brooks, needed to be resuscitated immediately. Cato remembers that when a nurse passed by with the 24-ounce baby in her arms, he was so small that she couldn’t even see him. And she recalls the warning that she and her husband got, as she was still recovering from her own procedure.

“The neonatologist that was on duty that night, she said, ‘Have you all taken a picture with him?'” Cato, now 38, tells NPR. “And I was like, ‘No.’ She’s like, ‘You need to take a picture tonight,’ because [she] didn’t expect him to make it through the night.”

Brooks spent nearly four months in the neonatal intensive care unit (NICU) before being discharged on oxygen in early 2020. Since then he’s had vision surgery, sees a pulmonologist for chronic lung damage and worked hard with physical and occupational therapists to defy the odds and catch up with his peers, as Cato puts it.

“Most importantly, he’s the happiest little guy and he’s very loving,” she says of the now two-and-a-half year old. The family has created a birthday tradition of donating 103 items — from swaddles to snacks — to the hospital and two organizations (March of Dimes and Ronald McDonald House Charities) who helped them through Brooks’ 103 days in the NICU.

Brooks is one of hundreds of thousands of babies born preterm across the U.S. every year. Preterm births are a leading cause of infant deaths and can have long-term effects on a child’s health and development.

And, according to a new report, they’re on the rise.

On Tuesday, the nonprofit March of Dimes released its 2022 Report Card, which grades the whole country as well as individual states, Washington, D.C., and Puerto Rico on measures related to the health of moms and babies.

The report found that the U.S. preterm birth rate reached 10.5% of live births in 2021, marking a 4% increase from the previous year’s rate, and the highest rate since 2007. Preterm birth rates increased in 45 states, as well as Washington, D.C., and Puerto Rico. That’s based on 2021 vitality data from the National Center for Health Statistics.

Drilling down, the report only gives one state, Vermont, a score in the A range (meaning its preterm birth rate is between 7.7 and 8.1%). A number of states, including California, Oregon, New Hampshire and Massachusetts, earned B’s. Several states — concentrated in the Southeast — and Puerto Rico got failing marks, with rates of 11.5% or higher.

Taken has a whole, the increased rates of preterm births across the nation knocked the U.S. down from a C- to a D+, according to the March of Dimes’ rating system.

The main takeaways of the report are the increase in preterm births and the widening racial disparities in maternal and infant health, says Dr. Zsakeba Henderson, March of Dimes’ senior vice president and interim chief medical and health officer.

But there are also some encouraging signs that infant mortality is dropping, and that states are taking action to improve health outcomes. Coming on the heels of the midterms, the report also outlines what policymakers can do to help — and in an interview with NPR, Henderson stresses that this is not a partisan issue.

“Everyone came into this world through birth. Everyone has been born and everyone has a mom. So this is something that I think is a universal issue that crosses the aisle,” she says. “Our country, unfortunately … is one of the least safe places to give birth and be born. And … there are policy solutions that [lawmakers] can enact to help solve some of the problems that we’re seeing.”

The bad news: Preterm births and racial disparities are getting worse

“I can’t help but highlight the fact that there are huge disparities of preterm birth and that states with the highest populations of, for example, Black mothers and American Indian and Alaska Native-born mothers have the worst grades,” Henderson says. “We also noted persistent racial disparities across maternal and infant health measures that we believed were heightened by the impacts of the COVID-19 pandemic.”

Infants born to Black and Native American moms are 62% more likely to be born preterm than those to white women, according to the report. Babies born to Asian/Pacific Islander moms have the lowest rate of preterm birth, but saw the largest increase of all ethnic groups since the last report (from 8.7% to 9.5%).

The report also confirms that the U.S. disparity ratio has worsened, when measured against a baseline from 2012-2014. States with the highest level of overall disparity include New York, Wisconsin and Mississippi, while those with the lowest level of disparities include New Hampshire, South Dakota and Oregon.

“And we know that in order to fully make a difference in the outcomes overall in our country, we have to narrow the disparity gaps and eliminate these disparity gaps … in preterm birth and maternal health outcomes that we see,” Henderson says.

There are several factors that may contribute to a baby being born too early (for example: the age of the mother (under 18 and over 35 are at higher risk), whether she has certain medical conditions, is pregnant with multiples or has had a previous preterm birth), Henderson says. And she stresses that early deliveries can at times be necessary to save the life of the mom or baby.

There are clinical and research efforts underway to try to prevent those medical causes, she adds, but in the meantime, there are other social factors that contribute to preterm births that urgently need to be addressed.

One of those is access to quality prenatal care, which is lacking in many parts of the country (a March of Dimes report released last month found that 36% of counties constitute “maternity care deserts“). Others include access to adequate housing, food and transportation, things that make it possible for moms to be healthy before pregnancy and receive the best possible care during it.

In Cato’s case, she feels lucky that she was able to drive an hour to a hospital with better resources. She worries that Brooks wouldn’t have survived if he had been born at her local hospital because “they just don’t have the equipment nor the training to intubate a 25-week[-old] airway.”

“So there was a greater power in placing us where we were during that time,” she says. “But it’s unfortunate that in more rural areas, for advanced care we have to travel.”

The good news: Infant mortality is on the decline

On the bright side, Henderson says, “We’re getting better at taking care of sick babies in this country.”

The report shows that 30 states had improved infant mortality rates.

Still, 13 stayed the same and eight states got worse. States with the highest infant mortality rates are mostly concentrated in the Southeast and parts of the Midwest.

And, like with preterm births, mortality rates were much higher among Black and American Indian/Alaska Native populations.

Henderson says that while the statistics about increasing racial disparities and preterm births are disheartening, it is encouraging to see more states enacting measures that improve maternal and infant health. For instance, 11 more states have recently extended Medicaid postpartum coverage from 60 days to 12 months after birth (bringing the total number of states that do so to more than two dozen).

“[That is] so important, considering that many of the poor outcomes that happen to moms, including maternal deaths, happen up to a year after pregnancy,” Henderson adds.

March of Dimes has also seen an increase in the number of states establishing perinatal quality collaboratives, which are networks of teams that work to improve health care and outcomes for mothers and babies.

They are different from — but complementary to — another type of review board called a maternal mortality review committee, which is a multidisciplinary group within a state that reviews the circumstances surrounding all of its maternal deaths in order to try to prevent more. According to the report, 47 states (including D.C.) have PQCs, and 38 (including D.C.) have MMRCs.

“We’re calling on legislators to continue to support these mechanisms in states, because we know that they will have a huge impact on the outcomes that we’re seeing,” Henderson says.

Here’s what can be done

March of Dimes advocates for a range of policy changes that would improve access to care and health outcomes, especially in the communities where it is needed most.

One way is by states increasing access to Medicaid — which Henderson notes covers some 40% of births in the U.S. — both in terms of adopting Medicaid expansion to reduce the number of uninsured people and extending the postpartum coverage period. Another is by enacting policies to reimburse midwifery care (which 37 states currently do) and doula services (which only eight states do).

Other preventative measures include launching committees to gain a better understanding of maternal death, investing in public health infrastructures and creating systems for paid family leave.

But those are solutions for policymakers. What can pregnant people do in this moment?

That means asking all the questions they need to understand what will happen during and after pregnancy, as well as warning signs and when to seek help (March of Dimes says it will soon be releasing an app with this kind of information and support).

Cato also encourages parents to be proactive in their child’s care, noting how invaluable March of Dimes (which she first learned about through a NICU bulletin board) was in empowering her to ask questions and work together with Brooks’ medical team.

And she doesn’t want others to feel the sense of shame that she says she placed on herself in those tough days.

“I felt judged, like I had done something … that caused harm to Brooks to make him be born early,” she says. “I wish I had known not to do that, and that [NICU staff are] not judging us for being there … there’s all kinds of circumstances that place babies there, and it’s not anything that we could control.”