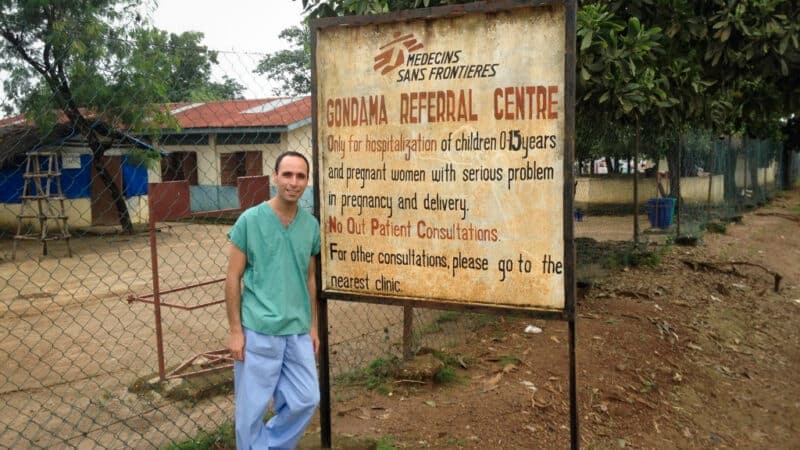 Two young orphans inspired Dr. Benjamin Black to write a book about his experiences during the 2014-2016 Ebola outbreak in Sierra Leone.

The British obstetrician/gynecologist knew the two boys, aged 8 and 9, for less than a day. When he met them, one was barely able to sip some fluid; the other was in a coma. They came from a village decimated by Ebola.

Their parents and relatives were dead.

A day after Black met them, the boys, too, died. He memorized their faces, vowed to remember them — and wrote a book with them in mind.

That book, Belly Woman: Birth, Blood and Ebola, is the inside story of what it was like to face a terrifying epidemic in West Africa that, in two and a half years, resulted in 28,600 cases and 11,325 deaths, according to the Centers for Disease Control and Prevention.

The outbreak of the Zaire strain of Ebola officially ended in Sierra Leone in March 2016. Today, there are vaccines and treatments effective against that strain.

But Ebola has not faded away. An outbreak is threatening people in Uganda, this one a rare strain of the virus called the Sudan strain, for which there is no approved vaccine or treatment.

Black is now an ob/gyn consultant in London and an adviser to international aid organizations including Medicins Sans Frontieres. We interviewed him about his experiences and their relevant to present and future epidemics.

The interview has been edited for length and clarity.

Your book is a vivid picture of what you saw and felt as the bodies added up. How did you remember so much?

The first three months I was there, I was a little bit in shock. We were seeing immense suffering, we felt powerless. It was an incredibly frightening time. I came home [to London, for a break], and that’s when I realized that this had to be recorded by someone who is in the center of it, seeing it happen blow by blow. I wrote it when these memories were fresh. It’s not easy to forget.

And yet you write that you could not possibly remember every suffering patient. But you were deeply affected by the two young brothers you met.

I cared for them early in my stint. I made a conscious decision: “I’m going to remember them.” Their whole family had died. There was no one left to know if they were alive or dead, and no one to remember them when they were gone. Everyone deserves to be remembered. Now, years later, I see their faces. They represent the many other faces I have forgotten, those who lived, died or were lost. I believe I wrote the book for them.

What was your most difficult decision during the height of the Ebola crisis?

I worked in the Gondama Referral Center, Sierra Leone, which was not an Ebola Treatment Center.

[The GRC was a 200-bed referral hospital that treated children as well as for women in urgent need of obstetric and gynecological care.]

Women came to us with pregnancy complications. It took 24 to 48 hours to get a test confirming Ebola, so we were working blind, not knowing who had Ebola. Women were coming late to the hospital because they were scared they’d catch it at the hospital, not knowing if they already had it. When they came, it was difficult to differentiate if they were unwell because of Ebola or because of pregnancy complications. And their conditions required really invasive procedures, like Cesarean sections. As the outbreak exploded, we stopped taking pregnant patients in the GRC.

That decision still weighs on you.

We could have been wrong. It was true that if you follow the rules of infection control, you could stay safe. But still, there could have been a disaster. If we got this wrong and all of us [local and volunteer health workers] got infected, it wasn’t just that we might die. If we got infected, there would have a massive ripple effect on international responders. They’d stop coming. I’m not saying we were right to close.

I still wonder. I have no doubt that in closing our facility there were women and children who found it immensely hard to get help and maybe couldn’t get help at all.

At first, in the referral center, pregnant women were treated with maximum fear because of all the blood and bodily fluids associated with childbirth. But eventually, as you worked in specified Ebola treatment centers, you and others developed ways to provide care, save lives and keep yourselves safe.

In the beginning, most of the pregnant women with Ebola would die. Almost all the babies died. Throughout the West African Ebola epidemic, no baby of an infected pregnant mother was known to survive more than 19 days. But we found out we could save the lives of the mothers by preparing for complications, like hemorrhaging, beforehand. We gave them medications as they labored in isolation, often alone. We told them to take the medication to stop bleeding as soon as the [stillborn] baby was delivered, because we knew it would take us at least 15 minutes to get dressed in PPE. We also made sure IV access was in place before they needed it, so that when we could come in, we weren’t working from scratch.

And what about that cumbersome PPE gear you wore in extreme heat and humidity?

Comfort is overlooked as a safety measure. In the current Uganda outbreak, of course it’s very important to protect health workers. You need surgical gowns, face shields, you need to make sure you don’t get body fluids on you. But if you dress in PPE to the point where you can’t see or you can’t feel, it’s not safe for the provider or for the patient. It’s safer to be protected and comfortable than to be overprotected.

[The CDC now recommends nitrile gloves, more flexible than vinyl, and no more than two layers of gloves to maintain dexterity. The CDC also recommends single-use, disposable face shields rather than goggles, because goggles don’t cover the entire face and can fog up.]

What are some lessons to take from the previous Ebola outbreak?

I think we need to engage communities early on, to get information out, to dispel rumors. I was in London during the COVID pandemic, and — gosh, where to begin. I felt frustrated, watching history repeat itself. People in high places were saying the wrong things, spreading rumors. We were always competing with misinformation. A lot of pregnant women thought it was unsafe to get the vaccine, which wasn’t true.

Early in the Ebola outbreak, families couldn’t even see a member who’d been hospitalized.

I think it’s important for people to have contact with their relatives. Whether Ebola or COVID, people need to know how their loved ones are being treated. If patients believe they’ll be alone in the hospital, they’ll delay going. For me, during COVID, it was important that pregnant women had access to a chosen partner during labor and delivery.

What factors led to Ebola finally ending in West Africa?

There are a lot of theories. At the end, the number of treatment beds and health providers had dramatically increased. More international aid organizations came in, but I don’t think anyone believes it was all down to the international aid. Probably the biggest factor was the response of the communities themselves. Local leaders started promoting better, accurate information.

Susan Brink is a freelance writer who covers health and medicine. She is the author of The Fourth Trimester and co-author of A Change of Heart.