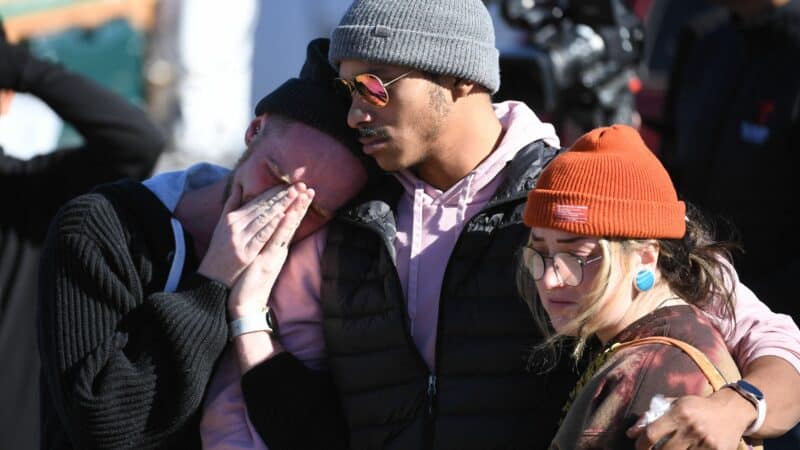 A 22-year-old suspect has been taken into custody after five people were killed and at least 25 were injured in a shooting at an LGBTQ nightclub late Saturday in Colorado Springs, Colo., authorities said.

Mayor John Suthers told NPR’s Michel Martin that one of the patrons “took the handgun from the [shooter] and hit him with the handgun to disable him.”

The suspect is believed to have immediately begun shooting people when he entered the nightclub. The patrons confronted him within minutes.

“We owe them a great debt of thanks,” Colorado Springs Police Chief Adrian Vasquez said at a news conference.

A witness tells member station CPR News that one victim ran to a nearby 7-Eleven and collapsed.

Anderson Lee Aldrich was taken into custody shortly after police arrived on site and is being treated at a local hospital. Officials said at least two firearms were found on scene, including a long rifle that appears to have been used by the shooter.

Police are still determining whether the attack is a hate crime, and the local district attorney, Michael Allen, said it will be investigated “in that lens.” Suthers also said it’s too soon to call the shooting a hate crime, which is also called a bias-motivated crime in Colorado.

The FBI is also on scene to assist in the investigation.

The suspect’s motive has not yet been disclosed.

Leaders in the community and national politics respond

In a statement on Facebook, Club Q wrote it is “devastated by the senseless attack on our community.”

“Our prays and thoughts are with all the victims and their families and friends.

“We thank the quick reactions of heroic customers that subdued the gunman and ended this hate attack.”

“My heart breaks for the family and friends of those lost, injured, and traumatized in this horrific shooting,” Polis said in a statement.

“Colorado stands with our LGTBQ community and everyone impacted by this tragedy as we mourn together.”

The gunfire came on the eve of Transgender Day of Remembrance, an annual observance on Nov. 20 to commemorate the transgender people who have lost their lives because of anti-transgender violence.

President Biden issued a statement to note the day and called for Congress to pass the Equality Act, which would ban discrimination against people based on sexual orientation and gender identity.

“Tragically, as last night’s attack in Colorado Springs reminds us, too many LGBTQI+ people in the United States — and around the world — continue to face unconscionable attacks,” he said.

The attack is the latest in a long string of shootings targeting the LGBTQ community. In 2016, a gunman opened fire in a gay nightclub in Orlando, Fla., killing 49 people and injuring dozens of others. It is considered one of the deadliest mass shootings in U.S. history.

Colorado itself has seen a series of mass shootings in recent years. In 2021, a shooter took the lives of 10 people at a grocery store in Boulder. In 2012, another opened fire inside a crowed movie theater in Aurora, killing 12 people. In 1999, two gunmen killed 13 people at Columbine High School.

Correction: November 19, 2022
An earlier version of this story mistakenly said that the Aurora, Colo., theater shooting occurred in 2019. The shooting took place in 2012.