Confusion And Frustration Grow After Police Shooting At Alabama Mall 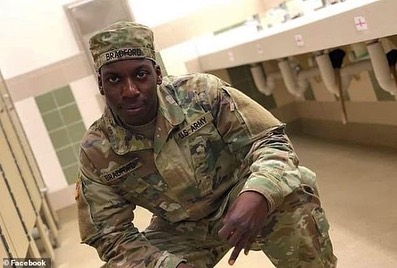 November 25, 2018
Heard on All Things Considered

Police, who killed a black man Thanksgiving night after a shooting at an Alabama mall, now say Emantic “EJ” Bradford Jr. probably was not involved in the altercation.

We’re going to go now to Birmingham, Ala., where the police department responsible for the shooting of Emantic Fitzgerald Bradford Jr., a 21-year-old black man, say they likely shot the wrong person. Bradford was killed by the police after a fight broke out and shots were fired in a mall in Hoover, Ala. Bradford’s family is now demanding that both the mayor and the police chief there step down. We’re joined now by Gigi Douban from member station WBHM.

Gigi, thanks so much for talking with us.

MARTIN: Briefly – as briefly as you can, can you just tell us about the sequence of events that led to the death of Emantic Bradford Jr.?

DOUBAN: Sure. This happened on Thanksgiving night at the mall, so it was full of people looking for those early holiday deals. A little before 10 p.m., there was a fight that broke out. There were gunshots. People started running and hiding in stores. And, very quickly, because there were lots of police there already for the holidays, police went toward this skirmish in no time. A police officer shot and killed Emantic Bradford, known as E.J., saying that he was fleeing the scene, and he had a gun. Worth noting that many witnesses that night also said lots of people at that point were running and had their guns out.

MARTIN: And what are the police saying about this now?

DOUBAN: Not a whole lot. Law enforcement has been pretty quiet since that extraordinary statement that they issued on Friday night – that was the night after the shooting – that essentially said, we were wrong. Bradford wasn’t likely the man who fired those shots that wounded an 18-year-old. There was also a 12-year-old injured and hospitalized that night, and a number of others were treated for injuries.

MARTIN: So is that essentially an admission by the police of the actual shooter is still at large?

DOUBAN: That’s correct. And, as I said, details from law enforcement are thin at this point. The investigation is with the state’s top law enforcement agency. But it is entirely possible that there was even more than one shooter that night. We just don’t know.

MARTIN: And Bradford’s family, we see, has hired Benjamin Crump to represent them. He’s the attorney who represented the family – or family members of Trayvon Martin. That is the unarmed Florida teenager who was shot and killed. Benjamin Crump has subsequently represented a number of people in wrongful death actions involving the police. And what does he say?

DOUBAN: That’s right. Crump was at this press conference earlier today with the Bradford family, and he said the family is not going to back down, and they demand justice.

BENJAMIN CRUMP: There could be no mistake about it. They were lied to when they were told their son was a murderer.

MARTIN: And what are they asking for, Gigi?

DOUBAN: Sure. They’re asking for all videos from the night of the shooting to be released – anything from mall surveillance to police body cams, even witness videos that people might have turned in since that night. He’s saying, essentially, understandably, the family is suspicious.

CRUMP: You know what would alleviate that suspicion? Transparency. Don’t say no more. Just release the video.

MARTIN: I understand that Bradford’s mother also spoke today. What did she say?

DOUBAN: That’s right, Michel. You can imagine just how emotional this was for members of the Bradford family, including his mother. You know, she said that – you know, as we know, a few hours after the shooting, the police backtracked – or the next day – and said that they had shot and killed the man – initially, they said they shot and killed the man who was responsible for wounding the 18-year-old when, as it turned out, they had not. That night, the mayor and police officials called the actions of police heroic. And Bradford’s mother says she knew right away that her son wasn’t the man who fired shots at the mall that night.

MARTIN: OK. Gigi, we’re going to have to leave it there for now. I’m sure there’ll be more to come on this story. That’s Gigi Douban of member station WBHM.

Thanks so much for talking to us.

Copyright © 2018 NPR. All rights reserved. Visit our website terms of use and permissions pages at www.npr.org for further information.