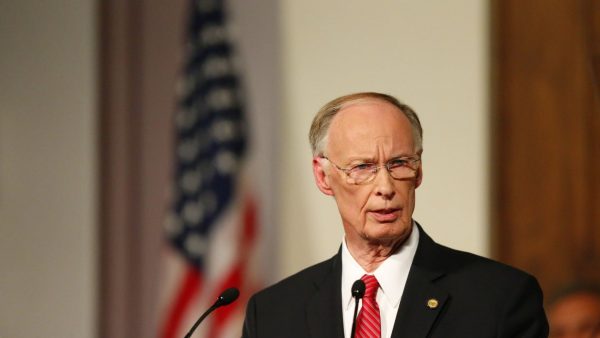 Alabama Gov. Robert Bentley speaks during the annual State of the State address in Montgomery, Ala., on Feb. 7.

Alabama Gov. Robert Bentley has resigned, after pleading guilty to abusing his office to conceal an alleged affair with a political advisor.

Supernumerary District Attorney Ellen Brooks announced Monday that Bentley “pleaded guilty to two misdemeanor charges: failing to file a major contribution report, in violation of Code of Alabama §17-5-8.1(c); and knowingly converting campaign contributions to personal use, in violation of Code of Alabama §36-25-6.” She added, “He has resigned from office.”

The Associated Press describes the scene as the plea agreement was signed:

“Bentley appeared sullen and looked down at the floor during the Monday afternoon session. …

“The agreement specifies that Bentley must surrender campaign funds totaling $36,912 within a week and perform 100 hours of community service as a physician. He also cannot seek public office again.”

The governor was briefly booked in Montgomery jail, according to local media reports, before heading to the state Capitol to announce his resignation.

Bentley had vowed as recently as Friday not to resign, saying he had done nothing illegal.

But the state Supreme Court decided to allow Alabama legislators to pursue impeachment hearings against Bentley, and calls for his resignation had been growing.

“It lays out in sometimes sordid detail an extra-marital relationship between the 74-year-old Bentley and political advisor Rebekah Caldwell Mason.

“The report accuses him of using state resources, including law enforcement, to hide the affair and protect his reputation, “in a process characterized by increasing obsession and paranoia.”

” ‘Governor Bentley’s loyalty shifted from the State of Alabama to himself,’ [special counsel Jack] Sharman wrote in an executive summary. He said Bentley ‘encouraged an atmosphere of intimidation’ to ensure the silence of his staff. …

“Political pressure for [Bentley] to resign has been growing since tape recordings were released in 2016 of him making sexually suggestive comments to Mason. Both were married at the time.

“Dianne Bentley later filed for divorce. The report says her suspicions of an affair were confirmed when Bentley mistakenly sent his wife a text that read ‘I love you Rebekah’ with a red-rose emoji.”

Also last week, the Alabama Ethics Commission found “probable cause” that Bentley improperly used campaign funds in connection to the alleged affair, among other ethical and legal violations.