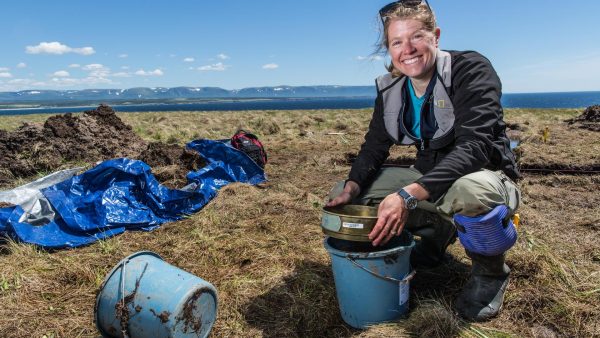 NPR’s Ari Shapiro talks with UAB archaeologist Sarah Parcak about her team’s discovery of the monument in Petra, Jordan — an archaeological park among the richest and most visited in the world. She found the structure using satellite imagery, Google Earth and drones.

In the third “Indiana Jones” movie, the climax takes place in the ancient city of Petra in what is now Jordan.

SHAPIRO: Huge sandstone facades are carved into the cliffs. The structures were carved about 2,000 years ago. And now a woman who has been described as a modern-day Indiana Jones has found a new structure at Petra. It’s the length of an Olympic swimming pool and twice as wide. Archaeologist Sarah Parcak along with Christopher Tuttle made the discovery using satellite imagery, Google Earth and drones. Sarah joins us now. Welcome back to the program.

SARAH PARCAK: Glad to be back.

SHAPIRO: Explorers have been surveying Petra for at least a couple centuries. How did no one find this before?

PARCAK: That is what we are asking ourselves. But, you know, where it’s located on the site – it’s located on a plateau. And it’s just covered enough to where when you’re walking over it, if you don’t know exactly what to look for, you could easily miss it.

SHAPIRO: What is it exactly?

PARCAK: That’s another good question. We’re not sure. We know given its pretty large size and its location that it probably would have been used in public functions, potentially some kind of religious function or ritual function. We just don’t know. That will require excavation.

What we do know is that it wasn’t just one large structure. There are other structures inside it. And the other thing, too, is there’s nothing else like it at the site.

SHAPIRO: You used Google Earth, satellite imagery, drones. What exactly was it that you saw that made you think, OK, that’s something we need to go explore in person?

PARCAK: You know, initially just because I’d never looked before at the site of Petra from space, I wanted to get a sense of the lay of the land. So that’s where I used Google Earth just to really see what was there, see what the different features look like from satellite imagery. And then I just started processing the imagery and looking for shapes that couldn’t be natural – so squares, rectangles, straight lines. You know, we certainly have a lot of data about structures that are known at Petra as well as roads and cairns and other features. And this rectangular form popped out.

When I initially looked at it, I dismissed it. I’m pretty skeptical. But I thought, well, it’s not going to do any harm to share that with Chris and his team. They’re going to go out and survey anyway, so I gave the data to them. And I was just blown away when they came back to me with the results.

SHAPIRO: I wonder if part of your success depends on just not assuming that all the thousands of archaeologists who’ve looked at this before you have found what there is to find. I mean, I imagine if I were looking at a place like this I would be like there’s nothing new to see here. People have been coming here for hundreds of years. If there was something to see, it would have been seen.

PARCAK: That’s exactly what I thought. You know, I did not think that we could ever find something this large and significant and important really so close to the city center. I’ve just – still surprised even though I was heavily involved in this project that previous archaeologists had missed it.

And it’s interesting. I’m now hearing from different specialists who know the site well, and they’ve actually said, gosh, I – you know, I wondered. I walked over to that place, but I wasn’t sure, which goes to show you that you need to pull back and kind of get this bird’s-eye view to get a new perspective on sites when you’re not sure if something is there or not.

SHAPIRO: Sounds like a lesson for more than archaeologists.

SHAPIRO: Sarah Parcak, congratulations on your discovery of this new monument in the ancient city of Petra.

PARCAK: Thank you so much.

SHAPIRO: That’s Sarah Parcak, an archaeologist and professor at the University of Alabama, Birmingham.

Copyright © 2016 NPR. All rights reserved. Visit our website terms of use and permissions pages at www.npr.org for further information.