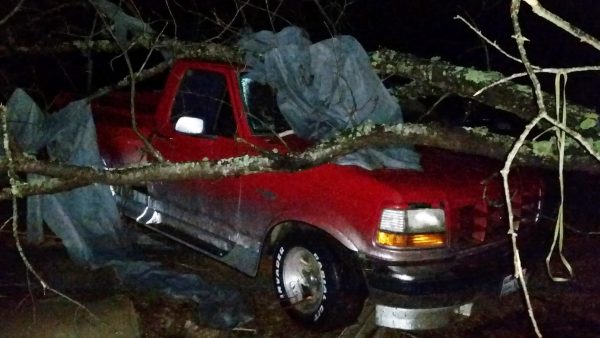 A fallen tree rests atop a pickup truck in Holly Springs, Miss., after a storm struck the town on Wednesday. A storm system killed several people as it swept across the South.

Severe storms put a damper on holiday preparations across parts of the South and Midwest on Wednesday. Travel was treacherous as the storms produced heavy rains, flooding and tornadoes. Power is being restored in many areas.

Tornadoes touched down in Mississippi and Indiana. Across the region at least 10 people have been confirmed dead.

Six people were killed in Mississippi. In Holly Springs, Miss., a 7-year-old boy was killed when the car he was riding in was picked up by winds and dropped. Four people in Benton County and two in Marshall County also died, and more people are missing. Rescue crews are going house to house in affected areas, checking on residents.

NPR’s Debbie Elliott tells our Newscast unit that portions of Interstate 55 were closed due to tornado warnings, and there are reports of an overturned tractor-trailer in north Mississippi.

Brandi Holland, a convenience store clerk in Tupelo, which is about 120 miles east of the tornado, told The Associated Press that people were reminded of a twister that hit in April and destroyed more than 2,000 home and businesses.

Three people were killed in storms that passed through Tennessee. Blake Farmer of member station WPLN in Nashville reports that in rural Perry County, where two of the deaths occurred, several homes “were hit hard.”

He tells our Newscast unit that “once daylight comes, the National Weather Service will determine whether tornadoes or straight-line winds are to blame.”

In Arkansas, officials say an 18-year-old woman was killed and a toddler injured when an uprooted tree fell on a home. Rescue crews pulled the toddler from the home.

The storms moved east, bringing heavy rain to Georgia and the Carolinas, but the tornado threat waned. The spring-like weather continued, though.

“From Alabama to New York, much of the country felt unusually warm temperatures in the 70s on Christmas Eve,” the AP reports.

Birmingham, Ala., set a new record high for the low temperature on Dec. 23: 73 degrees.

Mississippi Highway Patrol Captain Johnny Poulos warns drivers to expect more stormy days this week. “If you are going to be on the road, have plans in place to detour,” he says.

This time of year many people are usually worried about snow and ice, so it may seem a bit unusual to hear about tornadoes just before Christmas.

“It’s unusual but certainty not unprecedented to see severe weather similar to this in December,” says Meteorologist Greg Carbin at the national Storm Prediction Center in Norman, Okla.

In fact, a year ago almost to the day, five people were killed in tornadoes in southeast Mississippi.